After the last post I felt I was near the end and so rushed forward. In front of me I stumbled upon the Quagmire complex that appeared from nowhere to block my path. The complex was full of enemies and took several hours to clean up. As usual I had to solve the usual obstacles of teleporters, preassure plates and keys in order to progress on this level. There where some important locations and items on this level which Í´ve found.


At this time of the game I was hugely overloaded. For periods I carried over 300 kg. But one needs to if you are to have enough stones to carry around to press preassure plates if you do not want to use your rare magic cubes. The picture below is my character at the time. The inventory is full of items stacked on each other. The sacks and chests seen contains even more items.

After having completed the Quagmire I was able to get out. But there was no way to go. I tried out several of my special items and found some sort of summoning horn that worked by letting me ride on some sort of horse-beast across to the mountain in the horizon.

I was now at a place called the Warlords tower. It was a very tricky level. Not only had I to get the right kind of colored keys in different places in order to proceed - that is quite common -  but there was a lot of blinking pits (they appear and dissappear at intervalls) and preassure plates.

This place was filled fire dragons with spell casting abilities. Annoying. My tactic was to close in as fast as I could in order to freeze them and then slash them with my newly found sword. My spear wasn´t needed anymore with this new good sword.

I took all the stairs to the top of the tower and came to a room filled with moving stones and guarded by at least three fire dragons that hurled spells from long corridors. Add to that spikes at several places in the floor and my choice was to just rush forward. I don´t regret it but what I met was the lord Castellan himself. One of the warlords generals I suppose.

The evil general was about to kill a prisoner when I interrupted him. I challenged him for a close combat fight and he was actually surprisingly easy to defeat in melee combat. I was somewhat dissappointed. Behind his place was a room with a chest that contained the Dark Slag I had been looking for. It was the pure magic that the Warlords draws his power from. When I took it I got posioned and could not get rid of it. Besides, it was supposed to be contained in some sort of chest that I didn´t have yet. Had I missed something ?

I reloaded prior to opening the chest and returned to the ground below. I had been everywhere I could and still I had at least one door where I missed the keys. I eventually found the key amongst the remainings of a slained guard that I had missed. The door led me to the Fire Mountains, a fully new complex! Ah...perhasp I needed to find the smith the Black Gnarl to make me the chest ? 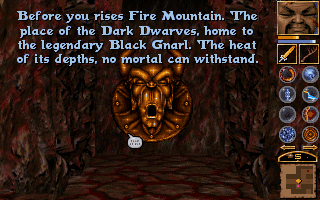 This complex var quite hard. A lot of blinking pits and teleporters that had to be entered and reentered in a particular order to progress forward. I eventually learned that I needed four iron marks to proceed to the inner parts of this complex. Boy, where they hard to find ? I was about to give up because I had looked everywhere and only found two. I had one pit which I couldn´t pass. I needed to check for a solution on this and was reminded that I some time ago learned a spell in which I could float. So I used the spell and floated past the pit. That led me to two other iron marks and some other fine items in the end. Actually, I found another very good sword that could do triple damage on a solid hit. Too bad these kind of items appear on the last level.

By accident I fell down in some pits to the level below. Not only does it injure me but it is so hot down there that in seconds I was about to die. The room I fell into contained a lot of items from dead adventurers and amongst other things I found a new necklace. Later on I found a sigil of fire protection that helped me resist the heat below.


After having unlocked all four doors with my iron marks I made it to level 2 of the Fire Mountains. That level was quite easy and I quickly made it to the dwarven smith Black Gnarl. He took the ingredients for me and crafted me a chest while singing. quite a good song actually. One of the few surprising highlights. Great. He handed me the chest. Yes! Now I would be able to contain the Dark Slag so I returned to the tower and retrieved the Dark Slag and put it into the container. Now what ?

In the warlords tower I found another exit that led me to the overland map again. I walked across the ice. I felt the end nearing and rushed forward. 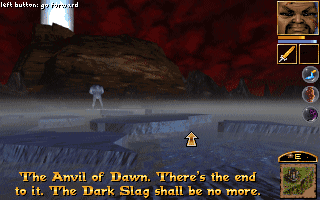 I met some sort of Golem that blocked my way. His arms had been removed and he requested help to restore them. I used the spell to repair things and he was happy with that. He requested the words of opening and since I had found them on a scroll somewhere I repeated them. He then let me in. Now would I be able to destroy this thing ?

No! Arghh!! Yet another complex met my eyes.
This complex was small but difficult. In the middle was a mainhall but with invisible walls so you couldn´t move wherever you liked. You had to find some way around the invisible walls, press some preassure plates, find two illusionary walls in the north and south.

To the north you had to retrieve a chalice and in the south you had to move some boulder into a preassure plate to remove some invisble walls in the mainhall. There were a special puzzle with twelve plates that hindered my way for a while. By listeing to the mouths about pressing half a day, I put stones from 12 to 18 and for every hour a new wall section was removed and let me forward until I came upon a teleporter.

This level hold the toughest monster so far. Just look at it above and you will understand why. The good thing is that they are stationary. The bad thing is that they either are places in a way that would not allow you to use ranged weapons or they are surrounded by anti-magic zones which renders your casting abilities useless. After dying a few times in melee combat I switched tactic. I checked where the anti-magic zone begun and just prior to entering it I cast stoneskinn on me and the attacked the beast. He couldn´t even hurt me. Probably because Earth spells is one of the spell categories I had prioritized.
<><><><>

After an hour in this complex and with a little help in a walkthrough at one or two occasions I finally found my way forward to kill the last enemy. I now had the chalice and a closed door. I used the chalice on a hole beside the door and the gate was opened before me. I entered. Now I was overland again. But this time I came in front of my real antagonist all the time. The evil warlord himself.
Of course he mocked me, even when I told him that I had the Dark Slag. He offered me a position at his side to be general over his troops. Tempted as it could have been in other circumstances I had bled to much to reach this stage and declined of course. Besides, who would avenge my companions I´ve met along the way and all promises I´ve made to allies during this adventure ?

I was prepared for an end battle when quitting the dialogue but nothing happened. Hmm. There was nothing to do. Nowhere to go except into a big light crater beside him. I went forward and fell down into it. Taking with me the Dark Slag to be destroyed with me. A terrible end but an end that saved the world. In the afterwords noone really knew what happened or which of the five adventurers it was that succeeded since none of them came back. But I did finish the game!

Actually, it didn´t feel very good to be dying like that. But it did add to the epic feel of everything.

After some ending sequences I got a page with my score of the game.
In my next post I will review this game.