Wizardry VII - Orkogre Castle and beyond

Last time my party got the mission to checkout the Rattkin ruins by the T'rang leader. On the overview map that is bundled with the game I am at Nyetalinth in the northwest and the Rattkin ruins could be seen east of that. 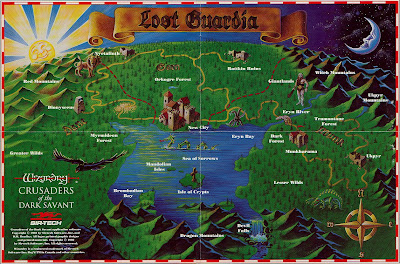 We moved from the T´rang city eastwards to look for the Rattkin Ruins. During the trip we fought our way forward through numerous encounters until we finally hit the walls of what I believe was the Rattkin Ruins. The problem was that there where no way in. We circumvented the whole place. The main entrance was blocked by strange trees. I searched around with both the spell detect secrets and with my fighter's scouting skill without finding any hidden entrance.
After awhile I was sure that I will not get into these ruins so we changed objective back to the first one. To follow up on the note given to us by the released prisoner in New City. We therefore backtracked into the Orkogre forest for hours until we found a glade with a ladder going down.This turned out to be the entrance to castle Orkogre.
At this point I was quite tired of loosing hours just wandering around the wilderness without having progressed in any way in the overall story. Now things where to change. When going down into the castle, we found ourselves into a classical dungeon. My pencil and drawpaper come to use once again. 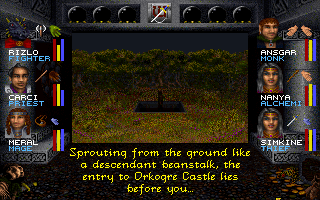 This castle turned out to contain three to four small levels with a lot of keys, levers and hidden buttons. This was the first true dungeon crawl so far and it was quite fun. There where some puzzles to solve and interesting items.
Amongst other things you met a monkey in a caged area that had access to a lever. To let the Monkey actually pull the lever for you, you had to find some bananas far down into the dungeons. That wasn´t very hard though. The other puzzle was. That was a door that wouldn´t open. In front of it was a pool of blood, dimly lit by the light from a crack in the ceiling. So what does that mean ?
Well, it turned out you had to find a polished breastplate and put into the floorl to let the light reflect on this piece of armour to the locked door who then would open. Logical ? Not very. The rest of the puzzles was more about finding hard too see buttons to press or trying the right kind of keys found.
One of the first room we found was the armoury in which we found a lot of items. Not better than what we already had but we could get some to sell later on and make some money. 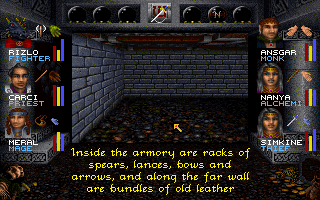 After having found some keys, pressed the right buttons and/or levers we finally met the Gorn King. He was very sad and lacked all enthusiasm. The war was going bad for him. Yet he gave me the key to a very valuable possession of his. 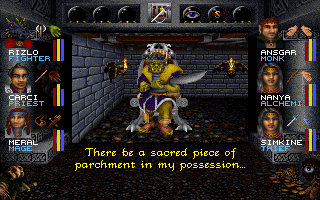 When we found his chest it was already empty and plundered. It seems there are other NPC parties out after exactly the same item as I am and since i have been running around much before coming here and also rested a lot my time had run out. I suppose I will get the item later on when I meet these NPC:s. 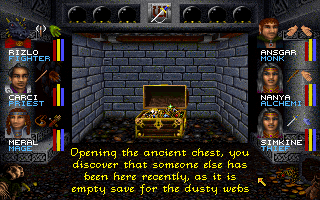 Anyway, our exploration of the castle gave us some interesting items and a lot of experience points. We left the area and headed for the first city called New City to sell the stuff we didn´t need.
Wizardry VII is quite advanced on the aspect of carrying capacity. You could carry more than your limit but you will gradually degrade your combat performance. That is depicted by change of colours of the value of your Carrying Capacity (CC).
When we came back to the New City we sold of weapons and armours that my current party member was unable to use. Here I met the NPC leader Lord Galiere. He had a Dragon Map he wanted 10.000 gold for. I had 15.000 gc and bought the map of him. It seems my mission in the game will be to collect all these maps in order to proceed into the main story. I have no interest to try to lookup these NPC:s later on in the game since they are roaming around certain territories and it is totally random if you encounter them there.
When we came back to New City I thought to try out all places that was either locked or too strong for me to enter the first time. First of all it seemed I had missed the Bank. There was a room with a small button that opened up a secret compartment with a chest. The chest contained a dead man's hair, a poisonous dagger and some sort of shroud. The two latter things turned out to be cursed, revealed by my priest who identified them. The dead mans hair is probably a special item that I will save for later use somewhere. 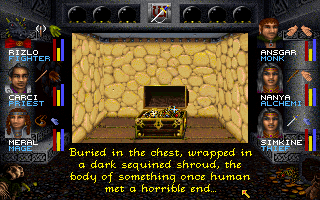 Another place led to some sort of forbidden zone. There was a tough fight to get in but this time around I could manage it. I found a door that clearly required some item to open it. I tested all my different items and found out that the Control Card could open it. Right behind was a very tough fight with Savant Controllers and Savant Troopers. They have the ability to paralyze you in which case the fight is over if all you your party gets paralyzed. However on my third attempt I defeated them, my priest raised a level and we were all happy. 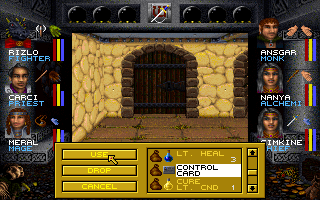 The room contained a strange machine with which I could try to talk to or use an item on. I have no items that seemed to work on it so I had to leave it. 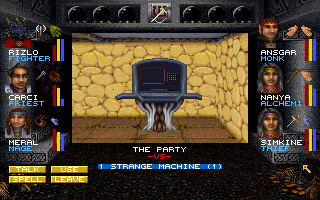 At the clerics quarter there where a statue in the middle of some water. The first time around I could not swim over to it but now I could. I searched the base of the statue and found a moonstone. As always it will be put into the backpack for later use. 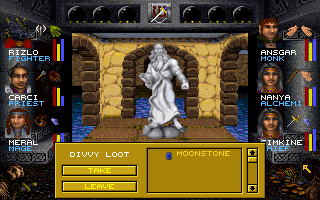 I couldn´t think of more things to do here right now.  I bought some better armour and switched my thiefs baselard to a cutlass. I was ready for my next task. I decided I would check out the Rattkin ruins once again and went there. When I arrived I entered through the clearing in which I´ve entered before as far as I remember but this time I could move forward a few more steps. I was surrounded by man-o-grooves, treemen. They are quite hard but I managed to defeat them. What I wasn´t prepared for was that this was only the first wave of attackers. With no ability to rest, three separate combats - each with several groups of enemies - occurred. By the third part, one or more of my party members where already dead. I think I tried for four or five times before I gave up. I have to return here later on but it is too difficult for my level 10 party right now. Unless I wan´t to resurrect several characters which I don´t. There are always some penalties for that.

Ok. so where too now ? The only other way to go is to continue past Munkaharama city to the east. I did so and met new strange types of creatures on the way. My target is the city of Ukpur as can be seen on the map above.

I am feeling like I am moving through syrup. Everything goes so slow. I also fear this talk about other NPC groups (read races) which you could learn about by choosing "Lore" in interactions. They always say which NPC has which map and where they where last sighted and so on. I fear I have to move around the whole world in the end to pursue them and their map pieces. Something which I am not very eager to do when thinking of how much time it will take to travel back and forth on the huge map.

I am not sure I will continue with this game. It sucks up all too valuable time which could be spent in another more rewarding and shorter game. Wizardry VII is not bad, but it requires huge amount of invested times, requires you to write down keywords to ask NPC:s about and lacks a decent automap feature. These three things keep you from playing it in a casual manner.