Last time I had just found my first Sanctuary in the huge underground city. Since then I have progressed with my party. So far we are all pulling east to get into new territories and on the way we have found new sanctuaries. I finally reached the marketplace.
Here you can visit a blacksmith to have your broken weapons repaired (I was not too happy to discover you can break your weapons in the middle of a battle. You always have to have a backup weapon with you). 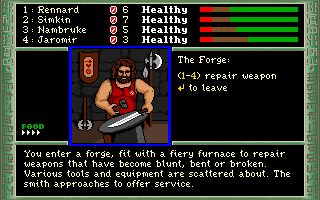 I also found a Maousoleum in which you can resurrect your characters if they die. The bad part - except for paying a lot of gold - is that you loose some attribute points when resurrected. There are, however, a guild just nearby that lets you recruit any new character of the ones pre-rolled. I haven´t tried them out yet so I  don´t know how good they are. 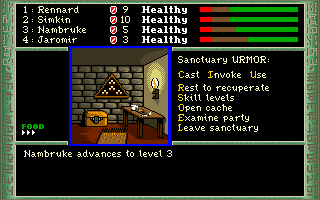 When you reach enough experience points for your next level you have to visit a Sanctuary to level up. During level up, I have noticed you can increase from zero to three attribute points (totally random it seems). You also get more hitpoints and spell points. Close to each Sanctuary are teleporters. With them you could  write the correct word and then teleport back to another Sanctuary or place. Too bad the place you have discovered are not listed. You have to write them down separately. 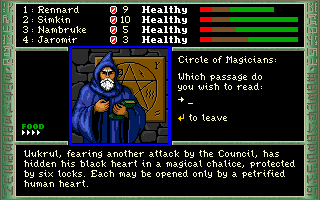 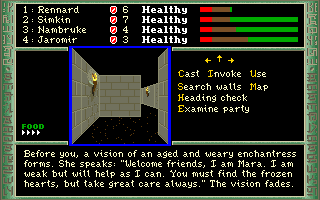 I have still to know any details of my main mission to destroy Uukrul, except that it seems his black heart are locked in by six locks that could be opened by a petrified human heart. I met a femal that faded in before me called, Mara, she mentioned I need to find the frozen hearts. So far I have had no reason to write anything down since every encounter is hostile anyway.
When you level up you could visit the temples or the mages and if you are of enough level they will give you another ring or school of magic. Here is where I think I can begin to explain the magic system in the game. For both priests and mages you have several schools of magic. Each school have spells divided into categories that relies upon a certain ring of metal. You start at the lowest category which are an iron ring of a particular school. That is the most basic spells. If you are of enough level you might be given a copper ring which gives you access to the next level of that schools magic and so on. It works the same for both mages and priests.
My only reliable partner is my mage. He could always throw spells in combat if he has enough spell points. My priest, however, invoke prayers and it is not guaranteed that they will be heard which makes him very unreliable. I suppose the chance to succeed also depends on the level or metal of the ring in the school but I have yet to verify it. The priest could summon elementals in battle. Only in level three I managed to summon an air elemental to fight at my side. That is another plus of the battles here compared to Demons Winter.
As said in my previous post, you have to manually enter all the spell names to cast them which forces you to print out the manual and flip through the pages every time you want to use your spells. It is almost impossible to remember the names except a very, very few. Very tedious and that makes me too lazy to use spells unless I really have too.
Other reflections of the game so far includes: 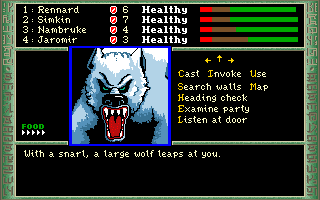 My party is slowly progressing but most of my gold goes to buy rations and heal my injuries. I have no money left to buy better equipment. I just got hold of the Chrome Key which opens a gate but right after I stumble into a den of thieves (or rather assassins). I have yet to defeat them in order to progress and have died several times in that battle. So I have to restore a backup from the sanctuary and go grinding for a few hours to reach level 4. Hopefully that will also get me some gold to buy better equipment. The priest is mostly useless so far and totally unreliable in combat. I hope he will be more useful later on in the game.
I am progressing farther and farther from my shops. I have no idea if my shops are the only one in the town or if I will find more later on. I would like to find someone to identify my ? items. I have not found any good weapons lying around so far. You don´t get much loot.
I am enjoying the game but the fights starts to get tedious and the overly difficult one-save-no-regret thing is starting to make things quite difficult. For example, the game saves the game in the beginning of every fight which means you cannot quit and reload. If you are unlucky the fight is impossible to win. In no way there are enough gold to resurrect several characters, much less so to be able to backtrack to the Mausoleum before the whole group is wiped out.
Upplagd av Saintus kl. 10:48 PM