Last time I had trouble getting past the thieves of den. I spent at least 4 hours trying to gain experience to get to level 4 which was very, very boring. Few battles gives much experience and even less so gold, so I think I must have fought at least 30-40 battles before 3 out of 4 partymembers rose to level 4. I gradually improved their armour but didn´t notice much of a difference in the battles.
After having replenished my stocks I went back to the thieves guild (now with more spells as well). I was able to defeat them and found their cache which gave me around 3.000 gold. I´ve never had so much gold in any one time before. I saved the game and my plans was to get back to my base i.e. Sanctuary. Damn it if those thieves where still around harassing me for one or two more fights. I don´t know how I survived but after several reloads I did and managed to get back. The problem is that I though the thieves den would lead me on in the city. I must have missed something because I could not go on anywhere. I had to backtrack and see if I had forgot a secret door or something.
Just after having written the above I returned to the only grate I had not opened yet just north of a teleporter. I switched the owner of my chrome key from my priest to my warrior and suddenly I could open the grate. That must be a bug in the game. It was by pure coincidence I tried this out.
Anyway, it soon led me to find the first heart that I need in order to beat the evil Uukrul. I also discovered that I had forgot to map out one exit of my automap so I was not stuck at all. I followd that path and soon reached another Sanctuary. At the Sancturies you could store surplus items for later retrieval but the store is not unlimited. Fortunately each Sanctuary holds a teleporter with which you can quickly teleport to different locations in the game. That is used frequently to get back to the marketplace to sell/buy items and to buy more food. 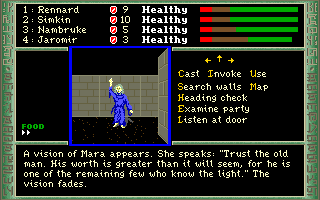 My explorations soon led to the sage Sagaris. The old man could identify your items, but not for free of course. I have not yet found any magical items or armours. But for a high fee the sage tells me what my ointments and gems are for. There are still a few items that I don´t know any use of and that is cloth, skull and bone. When I first met him he wanted us to do a task for him. I should find a place under the pool of testing where only my priest could go (at least a use for that character). 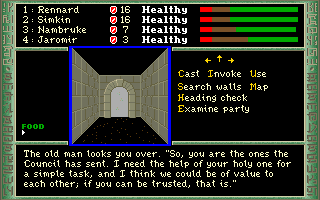 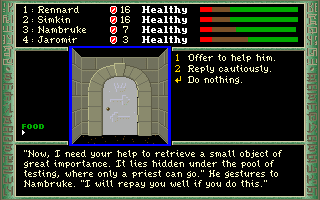 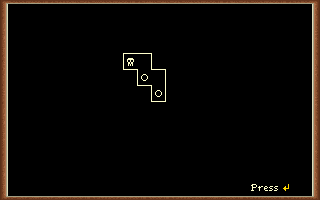 Sometimes you come across readings on the wall. Most of the time it is hints or messages but sometimes you can see drawings, like small portions of a map. You just have to memorize the drawing so that you will recognise it when you are there and then try to find out what it was about. The above map shows that there are two pits and the third might be a trap. But there are maps showing you where there are secret doors as well.
There are quite a few secret doors strewn across the world. Most of them are somewhat difficult to open. Your priest has to invoke the prayer hoyamoq to try to open it. Most of the time he fails (as he does with practically every other prayer) but sometimes you get lucky. Unfortunately there are doors that require 4 or 5 successful uses of the prayer and you would sooner run out of spell points. That means you have to return to a Sanctuary to rest and then return to the door again, on the way probably having to endure a few random fights. This makes the progress of the game quite slow.


You might also be able to force the door open och looking for a hidden device. The first option hurts your fighter but might work sometimes. The other option takes time and increase the risk of a random encounter and seldom works after the first few you found.
Half of my group are now in level 5. Moneywise the situation is a little better and not until level 5 will your fighter och paladin be able to wield more powerful weapon like the silversword.
If I have not said it before, you do not run errands for any NPC:s or doing small tasks to get experience. There is no such thing in the game so far. You get practically all experience points on your own by fighting fixed and random encounters, finding secret doors and stashes etc. There is not much story to go on. There are quite a few places telling what kind of room you are in but it seldom gives you any overview of the part or area you are in. Most of the time the corridors and stairs are endless. That has begun to feel a little boring. You never actually feel you complete any sort of areas and the random encounters never stop occurring even if you clear all rooms out. You have to return to your base to stock up for more food and then return to where you last was, but not without a few fights to get there.
My group seem to be in an Orc area. I have no clue of wether this is just an obstacle or if there are anything to be found there. The orcs could be very difficult to beat. There are a lot of different orcs from brown orcs, red orcs and up to orc warriors and orc chieftains. They are quite hard to defeat and basically takes all your strength.

Right now I am at an decision point of wether to continue or not. I´ve invested at least 15 hours so far and feels it needs at least the double more to get near the end. If something doesn´t happen soon that let things be a little more easy I might give up on this but until then I´ll continue my explorations.
Upplagd av Saintus kl. 10:52 AM

Email ThisBlogThis!Share to TwitterShare to FacebookShare to Pinterest
Etiketter: Dark heart of Uukrul