If you thought my lack of updates was because I have abandoned Balrum, you thought wrong. I have played Balrum all this time, albeit with less time available. The game has gradually become harder and my progress has been slow but I am now finally facing my main adversary. One tough fight more and I expect the game to be over. But let´s see what happened just after my previous post.

I had just got all the recommendations I needed in the Mage Guild and could then buy and upgrade my mage as far as I could afford moneywise and also in learning points. My mainquest was now to gather all four of the necromancers remains and I already had two. The first one was found in the Kings Tomb in the northeast of Balrum and the second one I got by accident when searching the dead lands in the southwest. Two more remained and I spent some time looking for the Searing desert until I found the entrance in the northwest part of Balrum. While looking for it I received several minor quests. One of them was to save the fishermen living around a lake from a sea monster in the region. I hunted down the beast and eventually killed it with my combination of using my pet, my ranged magic and a lot of potions.

When I had finished the most easy sidequests I was ready to keep going in the mainquest. I entered the Searing desert and started to look for a tomb. There was no map available for this region so I had to systematically explore it by walking back and forth each border of it and gradually erase all the blackness. I always avoided any fight with generic enemies such as ancient creatures, beetles or skeletons and only confronted those I believed was minibosses.

After a while I found an entrance to a tomb that turned out to be a real hell hole. It was built up of small corridors and after almost every stretch was a guarding skeleton. It was impossible to bypass them without notice so my tactics included to use the speed potion and run past them until I eventually would be able to shake them off. The problem was that there where always new skeletons ahead and no "safe place" to run to so it took me several tries before I barely managed to find a safe zone where the skeletons gave up their chase. 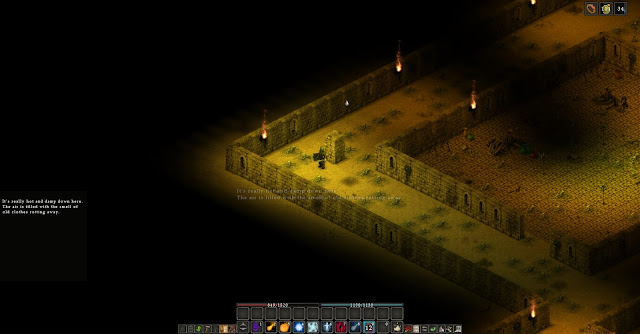 Then I found the first chests. I saved the game and then ran and opened the chests to see if there was something worth fighting for and most of the time it wasn´t. Instead of having lost health, mana and potions I reloaded and continued to explore the crypt. I eventually came to a room with two skeletons and one huge abomination. With several tries I eventually managed to run past the skeletons, avoid being killed by the abomination and still open the two chests and teleport back to my safe haven. The chests contained very good magical items. Convinced that I was clear of this maze I returned to the Searing desert to look for the other ancient remains.

I got ferried over to Crocodile Island and helped the tribeleader there to kill a huge crocodile monsterbeast. In return he gave me a key which led down to a crypt where I found a dragon. This was the brother dragon of the one I had found in the Kings Crypt. I told him of the whole mainquest and he promised to help me and gave me my last necromancer remains before teleporting me back to the Kings Crypt. Except, it wasn´t the final necromancer remain after all. I still missed one piece. I looked all over the Searing Desert once again and even found a small map which I had missed. I was convinced the last remains where hidden there somewhere but after a wasted hour of searching I was more and more convinced that the Abomination had my last remain. I wasn´t happy about my conclusion because I knew how tough that monster would be. I filled up my stock of mana and health potions and returned to the abomination and now started the most difficult and dreadful experience so far in the game.


This time I tried several times to run past the first 5-6 guards but never had a chance to shake them off. I used my full magic abilities: Turned one of the skeletons into a pig. That removed the threat for 30 turns but ended with a hostile skeleton. Nothing that would help me get pass it. I tried to run past them with my speed potion but to no avail. In 30 minutes I tried to find a way until I finally succeeded to hide. Still, having to fight the abomination would get me at least his two skeletons to fight at once with, not to mention the ones I would alert when getting out of my hiding zone. I had to pick one skeleton at a time and try to fight it. After much time I had cleared the maze of all skeletons guarding the abomination by luring them out one at a time. I have had to use some potions but had enough left to tackle the beast I believed.

Now I "just" had to kill the abomination itself. After several tries I understood it was impossible to confront the Abomination in direct fight. He was too strong and I had only about 7 or 8 healing potions but over 30 potions of mana. So the strategy that finally worked was to lay out a lot of traps in the small corridor in the image above and then lure the Abomination to follow me through the traps, taking damage along the way while I was hurling fireballs at him. I won on my 3rd or 4th try and only because the traps inflicted around 1.000 hp of damage on him. The rest was inflicted by my magic and melee abilities. When he died I sighed when I saw the last necromancer remain move into my backpack automatically. Phew! This was the worst fight so far in the game.


As I had said earlier I had never been sure that a pure mage is balanced enough to complete this game so to increase my melee abilities I have had to increase my strength to get better armours and equip better weapons. Even though I have Arcane level 3, I tried to upgrade to Arcane level 4 only to find very few level 4 spells and the few I found either wasn´t good enough or had a mana cost that was just ludicrous (600+ mana). Add to that that at least 25% of my spells failed and you can see I could run out of my whole mana pool in just two tries if I am unlucky. 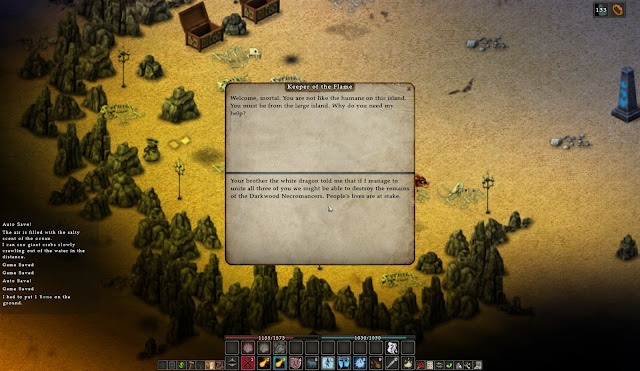 Anyway, I returned back to the dragons at Kings Crypt and entered the last fight with the end boss himself. It wasn´t even a fight. Regardless of my tactics I could take 1.000 hp of his 5-6.000 before going down. I had not enough healing potions even though I had spent an hour or two to buy more. He also has a terrible fire-based landscape spell that fills the whole screen and kills you instantly if you have less than 1.000 hp. As a mage my HP is not much higher than that. He can also teleport close to you and stun you. I simply didn´t know how to defeat him so I have given up this last fight for now. I am at level 7 and still have 13 LP to spend. I returned back and upgraded my strength 2 steps to allow me to equip better armours and weapons and got around 500 extra HP. But still, that didn´t affect the combat at all.

I am probably giving up trying to defeat him and have to be satisfied I at least made it this far. If I would have replayed the game it would have been as a pure melee fighter or archer. In the end I have had great time with this game. In my next post we will see how it will compare to the other CRPGs.