Serpent in the Staglands - Getting started

It only took to the next occasion when I had any time to sit down in front of my computer until I looked for a cheaper way to get hold of the full game of Serpent in the Staglands. I finally found a GOG CD key to buy from g2play and it was a smooth process. In a matter of minutes I was up and running and even transferred my saves from the demo version so I didn´t have to start all over again.


My party of four (two selfcreated avatars and two found companions) could now go south and entered a full new map that was a small town called Lumen Targ. Here I talked to everyone and examined everything I could. A few notes of interest: 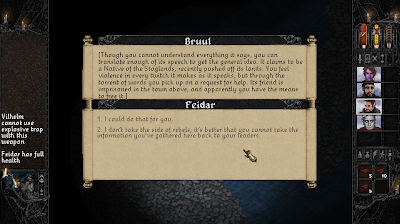 I then explored the wilderness south of Lumen Targ. I cleared out as much as I could and met wolves and imps. The imps are pretty tough and at this stage I could only take on one at a time. Somewhere around here I reached level 2 and was given two attribute and two skill points. I saved them for later since I have no idea where the best place would be to put them.

I eventually found three parts of the wilderness where either bandits, outlaws or adventurers where hiding. At least one of them was the group the bounty spoke about. I had no chance to defeat any of these groups at level 2. I wasn´t even close and died several times so I left them and returned to explore other ways.

At one place I found a cave that I entered. It was in this cave I came across riddle imps for the first time. They give you some sort of riddle with different answers to let you pass. I have to admit I did not succeed in any of them and so had to fight tough battles. It was not always they revealed anything of value though. At this stage I had gathered a few hundred emeralds and wanted to find better armour or weapons so I returned to the starting place, Lumen Fortress to restock.

While there I returned to a strange book I found earlier but didn´t know what to do with. I could handdraw something in blood. I had no clue what to do here so I just tried out a few random symbols. And to my astonishment I succeeded after ten tries and got hold of some sort of ritual blood that I put in a vial. I have no idea what to use it for.

Ok, so I could not defeat the bandits in the wilderness and I had no other way to go. When you reach the end of a map you get to the overland map. Visited areas are shown as white crosses and you could point to them and your party will go there. But the map is divided into gridsections so I went in there with my group and tried to figure out how to explore those empty squares. Now I realise that not every grid represents an explorable map at all. I have to move to grids and be informed about a place to visit while there. So the first place I got to was called Orfs Bridge.

Orfs Bridge was a strange place. The good thing is that I found my fifth companion and took him on. He was caravan guard and I desperately needed him in my group to beat the outlaws in the wilderness. I cannot create new avatars which I regret now and I don´t wan´t to bind his soul to me since it affects his alignment towards me. Anyway, there where guards that was looking for smuggled gods at this place and they searched me as well. Other than reequipping my group and spending almost all emeralds I found nothing that would further my progress in any way.

I left the city and with my new companion I tried to confront the outlaws and bandits in the wilderness once again. This time I had reached level 3 but I had still not spent any single attribute or skill point. I would like to wait until I find a favourite weapon to use or until I feel confident in using the spells in the game (which I don´t at the time being). I could not beat the bandits in the wilderness so I had no choice but to explore new areas in the overland map. I reached a place just west of Orfs Bridge where the mayor lived or someone similar. By bribing a guard I could get ahead of all the people trying to talk to the him. I first talked to him without using the aptitude noble and got some sparse information from him but I reloaded and spent a few points in the aptitude noble to better present myself and then I was given a lot of interesting information.


I choosed to continue my exploration to the southwest and reached the small town of Lebez at night. I was not allowed to enter and spent my time clearing the surroundings outside of witches. I had great help to defeat them by the city watch but I never understood how to progress the time to daylight so the city gates would open other than to return to the overland map and go around the place until daytime arrived. After that I had no trouble to enter the village. 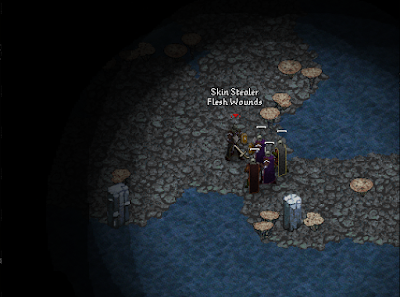 I begun to explore every house and soon found two mysterious figures that had just slain a woman. After I said I would call the watch, they attacked me. This fight took me three attempts to survive. I prevailed only after having dragged them out of the house to follow me long enough to alert the watch. The watch helped me kill the rogues and I got some experience points and a few items. At this stage my inventory is so full so I had to drop some items to make room for new ones. The most interesting thing I found was a bounty on one of the thugs that suggested the woman I thought I saved actually was a sought after thief. As proof of her death, her head was needed. I returned to the house to decapitate her head but felt somewhat awkward. I had thought she was innocent. That´s one thing of the game I like. Not everything is pure black and white.


In my next post I will return to detail more things about the combat which depends heavily on supporting your front fighters by magic rather than using any tactical placements. The one good thing about the enemy A.I is that is tries to target your weakest character. Almost always when I pull out one of my seriously wounded characters from combat, the enemy follows which makes it tough to save him since everything is played out in realtime. My other party members just chases the opponent that chase me and we could run around in circles before anyone gets lucky to land a strike. Anyway, more of that later. Since there is no revival in the game, a death of any partymembers mean I have to reload the game.

Regarding the skills in the game it feels that each point has very little impact and it will take some time to actually notice any improvement wherever skill you choose to invest in. That goes for attributes as well. Let me return to that later on in my adventure.

I like the game, and would continue to play on. The atmosphere is good, the few texts well written and so far the use of aptitudes is quite good. And you always lacks money which is a good driving factor.