Vampire: The Masquerade - A bit repetitive

Last time I had just woken up in London in 1999. Within a few seconds I realised I was alone, without my equipment and held prisoner by Vampire Hunters in a mansion.

Even though one or two of my most powerful weapons from my vault survived, all other equipment and my cash was lost and as it will turn out it doesn´t seem I will get it back. It´s like starting out a new game again. Here I have been trying to not overspend or waste my potions, scrolls and other unique items all the time, making the game harder for me but with the knowledge that I will need them when it gets really rough. And now they are just taken from me. Argh!!...I am not too happy about it. Still I have my levels, skills and attributes preserved.

In my search I found some documents that revealed that this organisation really was digging into the history of places I had visited in Prague and Vienna.


The first levels I was exploring - or rather cleansing - was some sort of lab center or R&D center buried deep into the ground below the mansion. Computers littered the place everywhere and it was guarded by lab personal equipped with everything from stakes, revolvers, shotguns and incinerators to automatic weapons.

I tried several of those weapons but I thought most of them was worse than using my blood sucking sword. Besides, they needed a lot of ammunition which just takes valuable inventory space. My favourite discipline skill, the vitae theft, worked wonders here. I could suck the blood out of my enemies from a distance in one shot, leaving them dead on the spot. I didn´t need any other weapon.

I slowly worked my way upwards until I reached the ground floor of the mansion. The graphics was pretty nice overall in London. Many more details than I remember of the medieval indoor settings.


It was obvious of the letters I found that an excavation was taking place to find the graves of the vampires and other things related to my previous experiences. The one person responsible for all this was one Leo Allatius and I was his greatest prize so far in his diggings. He just longed to tormenting such an evil creature as myself. His next goal was to hunt down the Tzimisce who had stealed artifacts Leo said was rightfully his.

Right at the upper floor of the mansion - after having killed all the guards - I stumbled into the office of Leo himself. As all my adversaries before him, he mocked me and it was quite a delicate dialogue to follow. But as history repeats itself, he was also passed to the other side by my sword after my efforts to negotiate something out of this situation failed.

I found more documents to reveal what Leo was up to. He was seeking life eternal but without the curse of Caine (that is, turning into a vampire). He was also out to destroy all competition. So to say he was a vampire hunter for the sake of goodness is really being to be out on slippery ice. 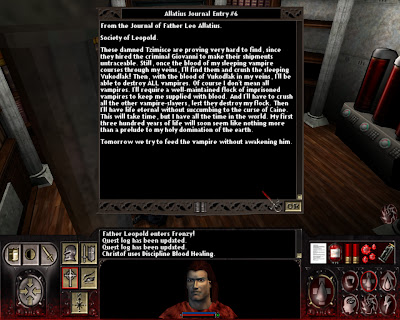 I left the Mansion, leaving hundreds of bodies, and entered the streets of London. Now I lacked directions but I had access to a map so why not just walk around for awhile ?

At a bar I met Pink and after a lengthy discussion where he - amongst other things - revealed that the connections in my story goes all the way to gangsters in New York, he volunteered to enter my group. which I of course allowed since I was alone.

His advice to find more about the shipments to New York and from where they go and who is behind that was traced back to a brothel in the city. In their store room I found a passageway leading down to a Sithe Temple.  Here I also found another ally, Lily, that I allowed into my group. 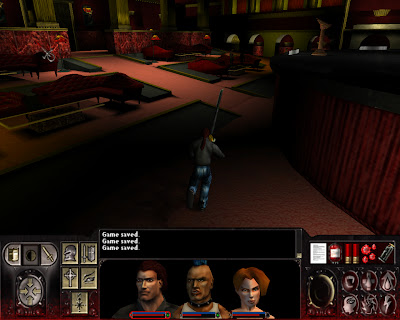 It was here I fought my way forward for three levels before getting to tire a bit of the constant slaughter and fights and the always four level complexes that had to be traversed. I was seriously thinking of quitting this revisit now, knowing that few surprises would probably reveal themselves in this game. But I kept moving. More for the sake of completing it than experiencing true enjoyment. 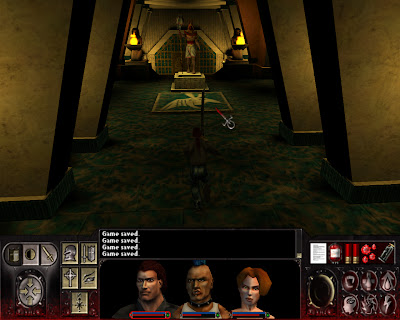 Deep down in the temple I met the high priestess. I quickly destroyed her but felt that she was not totally vanquished. I learned that her heart was stored in Tower of London and had to be destroyed in order to permanently defeat her. Besides, she knew information about the shipment to New York that she didn´t reveal.


We wen´t to the tower of London and for four levels I fought mainly spiders and other creatures before finding her heart. I was surprised I didn´t need to fight any powerful guardian and so returned back to the streets. Just outside we where overwhelmed by a huge werewolf that torned us to pieces. It was a bitterly hard fight. I think I had to try for at least half a dozen fights before I managed to destroy it with the help of my lightning spells. One of the toughest foes so far in the game.

I returned it to the temple and the priestess was brought back to life. I forced her to reveal that the ship St Magdalena was about to head for New York any time soon. After that, Pink wanted me to destroy her but as a good guy I gave her back her heart. Of course she didn´t thank me in any other way than trying to kill me by transforming into a huge snake. I managed to kill her with the help of boosting my skills and had the choice of destroying her heart of consume it for my own benefits. I choosed the former one, good as I am. 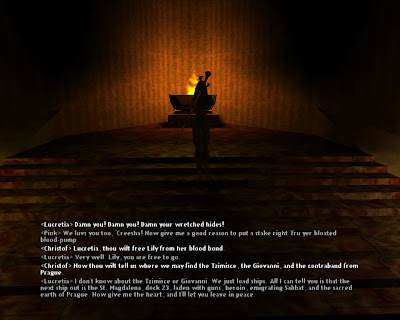 After she was destroyed we searched for the ship in Londons harbour and boarded it. Some time later we where in New York and hopefully the next post will be my last.....