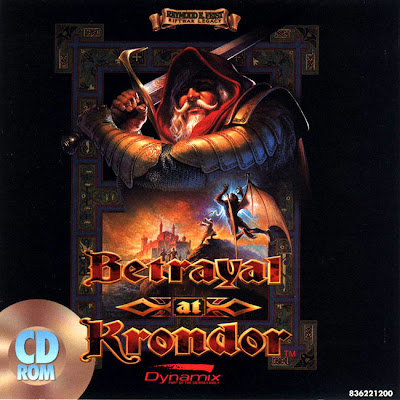 This game had eluded me for several years. I missed it when it was released in 1993 for the PC platform since I had just upgraded to Amiga 1200. It is a story driven RPG based on Raymond E. Feists world and settings. He is my favourite fantasy author and I am quite surprised I haven´t tackled this game earlier on my blog. But better late than never.

Betrayal at Krondor is developed by Dynamix and published by Sierra On-Line. It was a huge success. Let´s see what it can bring today. Is it worth playing ?

I installed the game in DosBox 0.74 and fired it up. I was met by a startscreen and some music. I set the preferences to use max of Everything and started a new game. 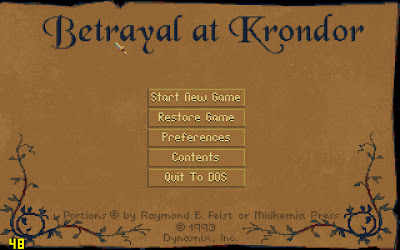 A short introduction unfolds. The game starts with Three characters sitting by the campfire: Locklear, Owyn and Gorath. Gorath is a moredhel - an elven race - and held prisoner by Locklear. Owyn is just a magician apprentice that happend to stumble into them. Suddenly an assassin enters the camp but Gorath is fast on his f


We start out right in the wilderness and I am not sure yet if I am one of the members of the group the story is centered on or if my group is. Right in front of us lies the corpse of the assassin. I advance to plunder him for a leather armour. There is also a few outburned campfires nearby that we investigate. All the time small texts popup to tell me in storylike fashion what happens and how my party members reach or how they speak or think. Just like reading a book.


Locklear insist that Gorath must be taken to Krondor in the south as soon as possible and since Owyn has stumbled into the group and know about this, it is security risk to let him go. Owyn therefore stays with the group. I explore the surroundings and go to the east first to explore the nearby town of Yabon. A few houses and a shop is all there is. The shopkeeper have a lot of weapons and armours for sale but I can afford nothing.


Since Krondor is due south we leave Yabon and head south.The landscape is narrow. Both sides are surrounded by hills or otherwhise impenetrable terrain. I stopped for a moment to get to know my characters better.

Each one has its own inventory. The left side shows items equipped and it seems it has only rooms for one melee and a ranged weapon and one piece of armour. The right side is the inventory as such. And it is also limited. It is not scrollable so when it seems full, it is full. Every weapon and armour has a condition value which shows its effectiveness. You have skills to repair items or you could find other NPCs to do it for a cost.

Each item could also be examined more throughly which lets you get a description and for weapons/armours also its statistics. 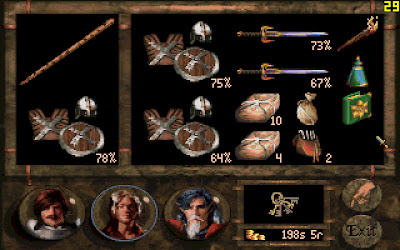 Each character also has a characters sheet showing attributes and skills. Skills will only improve by using them. For example the more you use lockpicking or your melee weapon the higher the chance it will increase. It does however take longer time the higher skillvalue you already has. Morrowind used the same system 10 years after this game.

A unique finesse is that you can choose an arbitrary number of skills you want to specialise in. They will increase more likely when used but the more you choose the smaller the effect is. In that way you could weigh your skill specializaion among the group members and build different characters. Very nice.

There are four attributes. Stamina is the value that first absorbs enemy hits. After that you health is drained. Speed is the number of squares you can move in the tactical combat and strength affect the damage done. 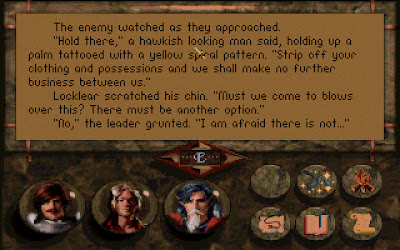 While travelling the wilderness, certain events triggers. They are always accompanied by story texts that interprets your groups behaviour and let your characters talk. You have no choice in this but to enjoy how the story evolves. I really like this because you feel more immersed in the game.

As time goes you consume rations. You need rations to restore health/stamina and can choose the number of hours you want to rest. If your health is too low you cannot rest to increase it without using stronger healing artifacts. I have so far not found any and so have reloaded when that occurs.

Ah, one more nice thing to note is that you can never rest to more than 80 % of your maximal strength if resting outdoors. And your skill values are reduced to the percentage which corresponds to your current health/max health. So if you are injured you will not be as effective to use your skills. I like that. It feels more realistic this way. 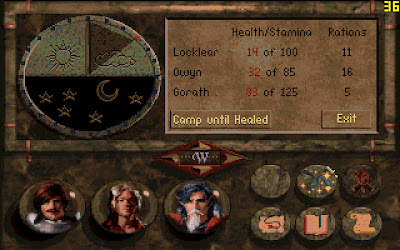 So what have happend to me during my first two hours in the game ? Well, we reached the town of LaMut and it showed a still picture of the town with the ability for me to visit the inn, garrisson and a shop. At the garrison I learned about some rumours and the lastest news and the inn brought me some interesting characters. I learned that the dwarves that live nearby can repair armours and my group speculated that the Moredhel must have some special means of communication because they are ambushing us in the road. Such information cannot travel as fast unless magic is involved. 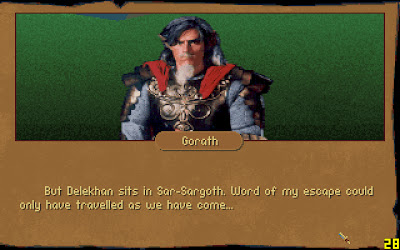 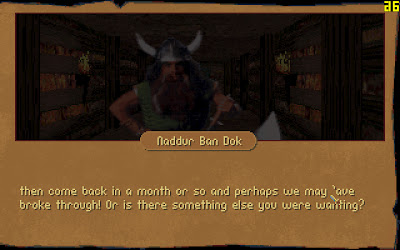 We leave LaMut and continue south. There I find an entrance to the dwarven mines which we enter. I quickly meet some sort of dwarf leader that tells us about an evil creature disturbing their works and that a great reward lies in wait for the one who solve the problem. Since I feel quite inexperienced we cautiously search the mines and stumbles into a few fights with robbers or other denizens. They give us valuable gold and a possibility to exchange our weared down armour and weapons. Besides, most of the humans leave rations for us which are very valuable. I cannot take on every fight though. Some is too tough so I leave them.

Here and there you could find chests. Often in the same rooms as other baddies. Locks could either be picked or opened by the correct key. 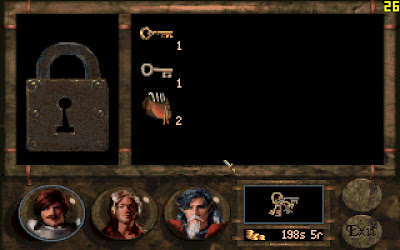 There are some locks called Moredhel locks which is a bit special. They contain a riddle and a few characters you could tweak to form the answer to the riddle. These chests often contain very valuable items but I have to admit that at least in half the cases I have no idea of the answer and had to cheat.

Eventually we found the monster which looked more like a giant. He was tough but we managed to kill him and got among other things a special key that opened a door in another part of the dwarven mines where some chests contained valuable items. The dwarven leader was happy to give us gold for our efforts and we left the mines and continued to head south towards Krondor.

As seen below, both traps and ambushes was prepared for us and we had to fight our way past. 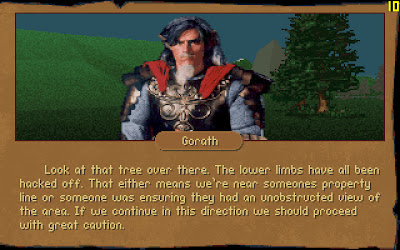 Combat in the game is turnbased. Your health, skills, attributes and condition and type of weapon determines the chance to hit and damage done. They are showned as a percentage and for a sword you could choose to thrust or slash. Slashing deals more damage but at a reduced accuracy. If you are seriously wounded you are not able to do much damage to your enemy at all.

I find that the combat works pretty ok so far. But I´ll have to evaluate more later on. 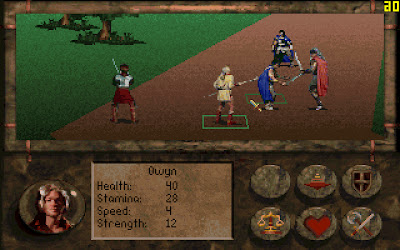 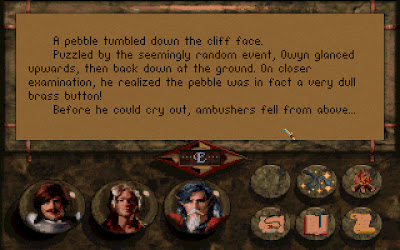 So far I like the game. But that is often the case the first few hours. I like the storylike presentation. It is more like a book that unfolds. I hope it will keep my interest. I for one, will play on and return in another post....