I knew this game was big but not until now I begin to realise exactly what efforts it will take from me if I am even remotely thinking of completing it. The gameworld is huge and spans several overland automaps in every direction. There are at least half a dozen cities I could take a coach to from my starting town Padavis and between these cities are huge landmasses of woods, rivers and mountains filled with hidden caves, ruins, castles and other sites of interest.

Anyway, I opted for the city Karminac which costed me 400 gold crowns. It laid westward of the starting town Padavis.

I arrived somewhere in the outskirts of the city and was almost immediately attacked by orcs even tough the townsfolk where all around me. The orcs never attacked the civilians and it didn´t seem I would get any help from the guards either.

I explored the outskirts of this town until I stumbled upon a huge walled city spanning dozens of screens from east to west and north to south. When I found the entrance I thought I was safe but here they came again. A group of orcs attacked and it was I who had to fought them off. Anyway, after exploring this town for well over an hour I wondered if I would have the patience for this game because the scrolling and moving speed is so extremely slow. You really need patience. But I didn´t wan´t to quit too soon. At least not until I have found any, just any, clue of what I have to do to win this game. At least that would give me a purpose and I don´t have to run around randomly in the wilderness in search of caves and other places of interests that just detracts from the main quest.

In one of the stone buildings within the walled city I found stairs that led down to an underground complex that connected different parts of the city as well as hiding some sinister creatures like mad mages, torture rooms, venomous snakes and rats.

I found a lot of different stairs that led upwards to different places within the city. They all eventually resulted in good lootings. As said in my previous post, you could loot everything you see in the game and no one will bother. Most items are mundane objects, potions, scrolls, books and lesser weapons laying around.

I also found the mercenaries guild and the sorcerer guild. I was hoping to be given some sort of mission but alas - this is not Oblivion -, they didn´t say one word except offering me training or buying things. Training by the way is extremely expensive if you already are somewhat proficient. Skills increase by using them and it takes it gradually becomes harder and harder to attain new levels.

Here and there the NPC:s do drop hints about background story or important persons. But it is more like rumours and you have to make up the puzzle of your own if you are to keep track of everything you hear. I don´t have that type of comittment in my gaming to write down everything, unless a clear major goal exists.

Another hour passed and I felt I was finished with this city. I had two clues with me. First, in the south there is a town that are besieged by pirates and in the area there are treasures to be found. Secondly, there are this Rorka ruler or whatever he is. I have heard enough things of him to either declare him evil or at least a major NPC to visit. The problem is that I don´t know where he could be found.


I started to wander in a south, southwest direction, mainly keeping us close to the coast - I prefer to be methodological in my explorations. After having stumbled upon some bandits I was overjoyed of finding a huge castle west of the city. I was attacked by Shadow Warriors outside that was pretty tough but beatable. On the roof of the castle I saw several skeletons keeping guard. I decided to enter. 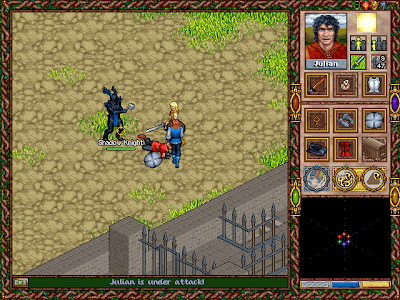 The castle was called Rorkas castle and consisted of three levels. One above and one below. It housed very irritating magic-bolt-throwing imps and a lot of skeletons. It was a strange complex because in the lower levels pulsated red gridlines of energy through the complex. They where all connected to some sort of magical device that shot bolts at us. We run through it down to the basement where a lot of different creatures was held behind bars. By removing a certain stone there, we unwillingly set loose all these creatures and had to fight our way back upstairs.

In the center of this place where Rorka himself and he very confidently told me that he would kill me and offer my heart to appease the lord of the halls of the dead. By letting my weaker brothers run away I confronted him with Julian (the red guy) and after a tough fight with some healing potions used, I killed Rorka and got a key and some items.


What irritates me is that in the room where Rorka was found there was this place of center where Rorkas heart sat. I couldn´t take it, destroy it or find any other means of aquiring it which frustrated me but I had to leave it there and move on. I was sure I had accomplished something important in the game but I have no clue of what other than that Rorka was an evil guy affiliated with Sariloth.


Not entirely satisfied we left the castle and continued our explorations in the southwestern part of the area. We fought countless of battles with Shadow Warriors which where met in increasing numbers. They also regenerate and always come back in one way or another. After wandering around for at least an hour we found a noname cave that we entered.

The cave was inhabited by serpent men and a lot of poisonous spiders that managed to kill the weak brother Kevin several times before I decided that Julian would take care of the fights alone. The cave was quite small but offered us some very good items. The best one being a crown that when wielded divides damages received by 3.

We also found two new spells like fireball and incinerate. They where given to my mage Kevin.

There is much to like about the game. The freedom of movement in the world, the search for better equipment, weapons, armour, magical items and gold. But likewise its major drawback is the aforementioned slow movement and the fact that the brothers almost always get in the way of each other, either by blocking the path or refusing to getting up or down of stairs. Add to that the awkward communication interface and
the half second of delay when clicking the mouse both for  purposes of movement and for the interface windows. The game really tries your patience.

Despite having played for another 5 hours since my last post I have still no real clue of what to do next other than to continue to explore the world. I really want to like this game and will at least give it a few hours more before deciding if its time to wrap this game up with a review.