This so called starter dungeon was really no beginners cave at all. It comprised three levels where the last one was actually the easiest one despite the fact that it was swarmed with skeletons guarding kings, lords and founders of the city.


This level contained two locked doors one after another. They required keys that had to be found on this level. The first one was quite easy to obtain but the second one was hidden behind a secret wall that led to a small room. It was by pure chance I found that during my examination of the walls. In the last room I found a chest with a special healing potion. Since I couldn´t find any exit from this level I figured that might be the correct one needed to heal my master above.

Some reflections so far:

When I returned with the elixir to my master he was cured and told me interesting stuff. He wished me to next go to the dwarven mines to look for an ancient shield called Dobelal. He warns me that Pendugmalhe want to destroy this artifact and it is of uttermost importance that I find the artifact to stop him from his crazy plans. So what is the plans anyway and what is the background of the game.

Pendugmahle is the creator of Bronagh, the prince of evil from the first game in the series. Now he is about to take revenge on the land of Kalynthia for the heroes who defeated Bronagh. That is the short version and the manual does nothing to get a better understanding of why the hunt for artifacts is important. 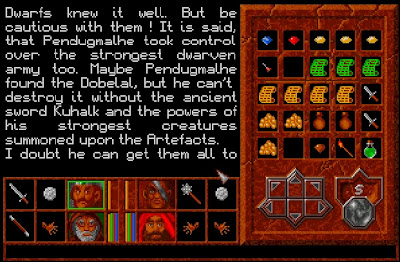 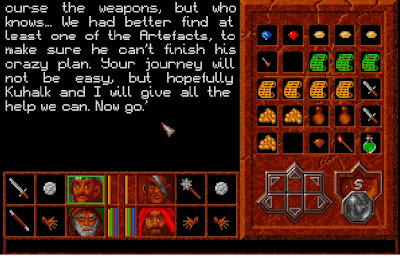 My spirit was really great when I understood I was finished with the starter dungeons and where about to enter the land above. You have no map like in AP1 but see everything in 3D just as if you where in a dungeon. When you are leaving the dungeon you start out IN A FIELD OF LAVA! That is quite cruel and I had to run for safety before the whole group would perish.

There are no visible roads or any other landmarks to go by and since I haven´t found any map that accompanied the original game, I had to start drawing one myself. The map is quite large and irregular and at least 30x30 hexes (the same with dungeons). After roaming around for awhile we were attacked by wandering animals, like bears.


After some time of exploration I was glad to find the first town in the distance. The town opens up with an image of the town where you could choose to visit a blacksmith, temple (to heal), food store or magical store. There are also exits leading to the other side of the town. I have found two towns so far and nothing that differs them apart of what I can see. Not even when I compare prices or the availability of stocks. Each town blocks small passages so when you exit on the other side of the town a new huge overland map is loaded. I have no idea how large this world is.


After running around for a while I found no place of interest in the first part of the world and I choose to enter the south town to get on the other side. After all, that was the hint given to me where the dwarven mines where. After some  exploration we found the entrance to the dwarven mines.

I was greeted with warmth and thought I would get help on my mission. 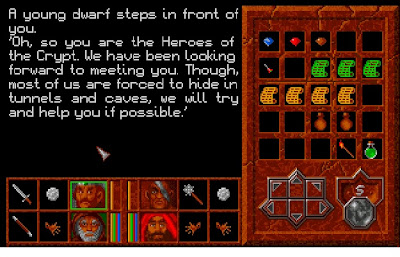 But all I have found in the tunnels is crazy dwarves that attack me ruthlessly together with some sort of a small blue four-footed animal. I don´t really know what to think. Here and there I get description of friendly dwarves but they could never be seen.


The level contains a lot of tricky preassure plates. Most of the time it is not obvious what they do. That goes for levers or buttons pressed in the walls. I have actually no idea what most of them do and that is so frustrating because one has to search a large area of the map to find out. Secret doors could also be found here and there together with teleporters and traps. All in all, this is a rather tough level. I have not yet found any exit that will take me further down. I have found a door that requires a key but not the key itself as of yet.

I am still liking the sequel very much but I am afraid I will get stuck somewhere here because there are no complete walkthrough available for this game if that happens. However, who dares wins and I will do my best.