While exploring level 4 of the dwarven mines, I was wondering why one of my mages had a huge amount of xp of over 200.000 while one of my warriors still had only about 80.000. After awhile I figured out that it was because I am always casting a firewall at my enemies as can be seen in the pictures. I get xp each time any individual caught within takes damage. That made my mage go to level 8 and is way ahead of my group right now. He has got some interesting spells by now. Unfortunately my other mage does not have any lasting area attack spells and so will be behind a few levels all the time if this continues.

During my explorations, I have had great use of the Levitate spell as it allows me to fly over preassure plates without affecting them and lessens my damage when traversing fire hexes.

I also mentioned in my last post that I hadn´t found any place to use my rope yet. Less than 30 minutes after that statement, I did find a pit I could use the ropes on to descend. I can return by using the spell Levitate and fly up through the hole.

Another thing I mentioned was the lack of more descriptions and I ran into my first puzzle shortly after as could be seen below. Actually, I did not really understand  it but by trial and error I placed four long swords in the room and it first opened up a path to a closed door, then the door itself and 2 impassable walls. One for every correctly placed longsword it seemed. 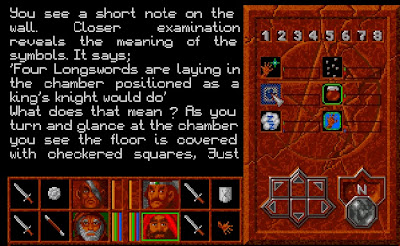 After solving this (you need to find four longswords first!), my way down to level 5 lay open. I descended. To my happy surprise new graphics greeted me. It looks pretty good actually. I remember I´ve read somewhere that they used the Amigas EHB (Extra Half-Brite) mode of 64 colors (32 colors of choice + 32 colors of darker shades from the first).


The new inhabitants greeting me this time was spell-casting monks and some type of worms. They are tougher and do more damage which means I have actually got killed a few times already when becoming surrounded by them. Good! Now the fighting challenge at least increases a bit. The fights are still easy but definetely tougher than before. The reason is mainly because you have a lot of magic points that seldom gets depleted. If they were, the combats would immediately be both tougher, longer lasting and....more tedious I believe.


Level 5 was a typical dungeon of 30x30 hexes. My main approach is to map the level completely before stepping on any preassure plates or pull any levers. Then I search for hidden doors on strategical places and if I get stuck, more methodical at certain areas. I also have a spell called True Seeing that I have been received lately that for a short time shows secret walls. Almost all levels requires you to either find the correct keys or find the hidden stairs down to the next level. There where no puzzle on this level but a pit down  to level 6 was hidden behind a secret wall not easily discovered at first.


I quickly descended through level 6, 7 and 8. At one or two places I had to get a hint from a walkthrough in order to find a missing secret wall, or what a specific preassure plate would do to the map when I had no other way to continue, but other than this, I managed the rest of the problems pretty well.

At this stage my group had increased a few levels more and I had found some interesting weapons and magical items. For example I have found a few magical weapons like Sword of Mercy (increased my intelligence and wisdom by 1), Enchanted Blade (no visible effect) and Hammer of the Dwarven kind (increases my constitution by 3 and as an effect my hitpoints). Since you don´t see if you hit or what damage you do it is very hard to know which of these are better than the other. A sword I found, Sword of the lovely, actually drains you of one level as long as you wield it, and return the level back to you when unwielding it. I have no idea if the sword in itself is worth it carrying. Only trial and error will show that.

At one place I was warned to not touch the dwarves treasure. But since I was attacked by the dwarves while entering this godforsaken mine, I didn´t care and opened all chests I found. I didn´t even notice anything bad happened so I forgot about it, until several levels later when I entered a new level and was met by this: 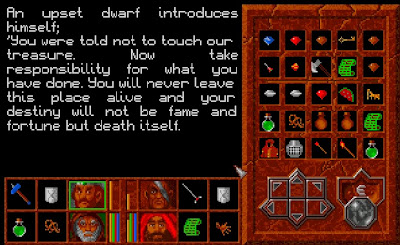 Oh oh....I was terrified this would mean some very negative effect for me but the only thing happening was that a trap sprung on the single hex I stood on. An electrical bolt was shot continuously at me. I moved out of the way and never noticed any more effect than this.

At level 7 or 8 the graphics changed for the third time to my amusement. Also, new monsters where introduced. I call them guards and elite guards. They where not noticable harder than the previous opponents though and now both my mages had got fire wall and other area damaging spells. That meant my other spellcaster quickly could regain one or two levels. Farao my left-behind mage, now raised his level to 10 while my other mage Trian now are at level 15. I have noticed that both spellcasters receive exactly the same spells. The only thing that differs is the amount of spellpoints in each spell category. 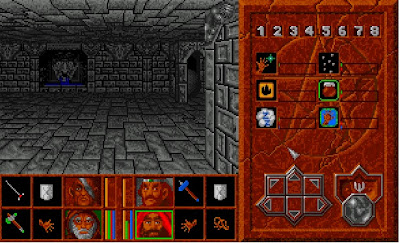 When reaching level 7 I wondered how many levels there could be in this complex. My inventory was now so full that I had to constantly shift items and drop less valuable ones. I was really looking forward to return to a town to sell off my stuff. The end of level 7 had a hex of fire with a message like below. 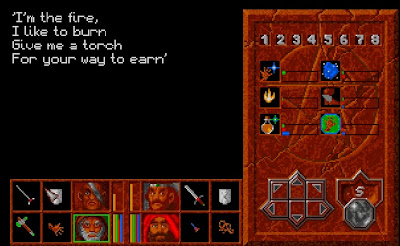 It wasn´t harder than that I put a torch down on the ground where the fire was and a wall opened up, leading to level 8. This new level took me some hours to map. At this stage I really would like to get to my goal and stop descending into the depths of the dwarven mines. I mean, how many places must there be on the overland map to visit ?


Anyway, after completing level 8 I found the entrance down to level 9. It turned out to be the last level. It contained teleporters that transported me to different areas which made my mapping more difficult. I knew I had to make my way through two locked doors behind eachother, and finding the last key was a little tricky. But I have learned that every lever needs to be pulled at some stage in order to progress. The difficult part is that some distant area could be effected by the lever and it is not that easy to go through the whole place in search of this single change. It could easily be missed.

Finally, the last door was opened and a hall with pillars met me with preassure plates, spinning hexes and so on. The hall was filled with guards and was of course an anti-magic zone. I used my hit-and-run tactic (which normally I don´t use in this game because of the slow-responsive keystrokes) and took out one guard after another. Each of them dropped a very valuable item which was not normal for ordinary guards. For example, I found Boots of fumbling , Cloak of Mind and a Club of poweroaks. Nothing of them had any visible positive effects but I was happy regardless.

Before I had even killed all the guards I stumbled to the corridor on the other side where I found the shield I was looking for. Hurrah! I was very happy to have finally reached it. I could take it and it raised one level of my character as soon as I wielded it. Then I heard the voice of Kuhalks who first gave me my mission: 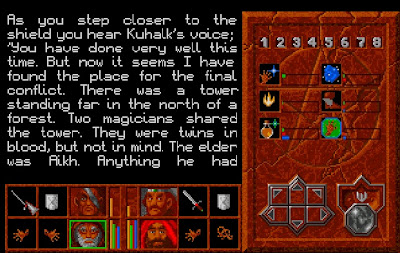 My next step was to look for a tower somewhere in the north of a forest. At this time I was very eager to return to the surface. I was frankly quite tired of getting deeper and deeper down through the same types of dungeons all the time. Now I was ready for something new. 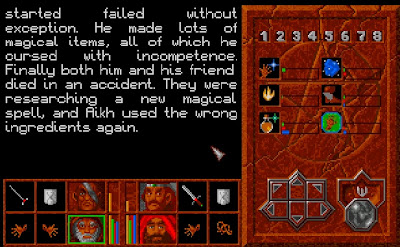 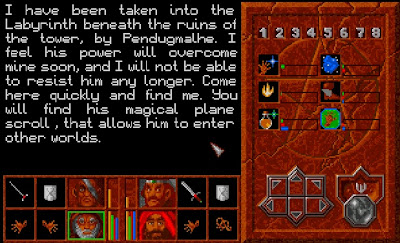 I returned to the surface and immediately traced my way back to the nearest town. Here you could visit the blacksmith to buy or sell weapons and armour, the pub for trading in gems and the church if you want to resurrect or heal a member. It seemed I already had the best armour, plate mail, for my warriors and my weapons were magical instead of the standard ones on offer. There are no magic shop in which you could buy magical items so I sold off most of my gems and other stuff and got myself some money. Hopefully I could use them in another town.

When I was ready to leave I continued to explore the western part of my map and I stumbled upon another town in the edge. To my dissappointment it offered exactly the same items on stock so I left and went through the town to the other side. Now this was another huge map to explore and I was attacked by wandering giants. I quickly disposed of them and mapped the edges of the map because I had found nothing of interest in the inner domains so far. To the north I discovered another town. That was the only place of interest on the map that I´ve found. The overland maps are really scarce of interesting places.

This town will lead me to a new overland map in the north and I hope this one will hold the tower I am now looking for. My group are well equipped, have a lot of empty inventory slots and are very eager to find the next place in this game.

I am still enjoying the game but it reminds me a lot about the gameplay value of Crystal Dragon though this game is more varied due to the overland maps and the graphics here is better and more colorful.