Avadon 2 - The Corruption: A new beginning

In my desperate attempt to find new and old crpgs to play I tried out several ones during the last months that I didn´t like. I stumbled across a newly released game called Mines of Grimvale that I payed for, only to feel cheated by getting a freeware Dungeon Master 2 clone from 2001 with only 2 levels, no story and no manual. The game was obviously not built from scratch but a package built from existing modules.

I also bought Gods: Lands of infinity SE which was a huge disappointment and a blend between a trade simulator and an RPG but with a lifeless world. Too bad.

A few years ago, actually before starting up this blog, I played Avadon the Black Fortress which I liked very much. A stable, solid partybased RPG with turn-based combat and an interesting story. So when the successor was on sale not too long ago I bought it to have in reserve in my game library and now was the time to start it up. One hour into the game I felt once again sucked into this world and game engine. 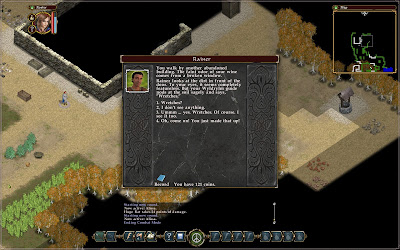 The gameworld is quite elaborate with the Pact being a confederation of allied countries that try to cooperate to keep an external threat at bay: The Farlands. To oversee that no kingdom in the alliance takes more power than granted or abuse the alliance there is a council called Avadon, a sort of police/military organisation that keep the order and are led by the legendary Redbeard.

You begin the game at one of the Pacts outposts in an area with bitter feuds between the locl tribes which both claim the lands. You are on a patrol together with a scout and you discover some very strange things happening. Something is going on. Advanced mines are found in the vegetation and giant rats have infested the area. Soon you discover tracks of humanoids and rebels which you have to fight. This is clearly not just skirmishes of unorganized raiders.

During this first hour the game plays out like an tutorial. I learn a lot by my scout wingman and togheter we investigate the area until we have to split up and take different roads to shake of followers. Unfortunately things are not getting as well for my scout as for me. He is hunted down by a Titan that smash him down and carry him away. I have no idea if he is dead or not and cannot intervene because of the bitter odds. 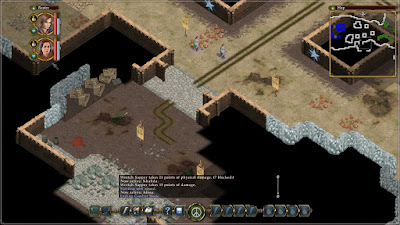 I have to return back to the fort and tell the commander of what has happened. When I arrive the fort have just survived an attack itself and bodies lies everywhere but the fort still holds. I examine the whole fort and find out more about what is happening in these parts of the lands. The outpost is clearly in dire need of reinforcements and the commander wish me to send a report of what is happening to Avadon about this.

In the fort I stumble across all basic structures in a small community like a blacksmith and different shops. I also get to know a few other collegues which happen to be hands of Avalon (a fine and honorary title) which are willing to join me to report back to Avadon. You control the other characters just as your own character and develop them when they level up. This is of course one of the major highlights in a roleplaying game.

At each level up you are given one attribute point and two skill points to spend. Each class have different skill trees with abilitites that you can use during combat. Each use drain your vitality which can only be restored back in the Avadon fortress or by using potions. Also, each ability must cooldown a number of turns before you can use it again. The good thing is that you can increase the power of each skill by spending more points in it, gaining even stronger effects. To plan your skilltree advancement is also one of the stimulating but challenging things in this game.


Back to my adventures. To reach Avadon I needed to go to a stone portal far out from the outpost and the road was blocked by rebels and roaming creatures. Eventually I come across a small village and heard terrible tales from the few inhabitants still there. I helped out scaring away a mercenary band camped just outside a farm and I destroyed several nests of spiders and other creatures that had begun to inhabit this area. In the end my progress are stopped by evil forces belonging to the rebels. They knew messengers were on the way to Avadon and one of their semileaders tried to stop me. This resultet in several fights against him and his minions but eventually I got to the teleporter stones and could get back to Avadon for a report. 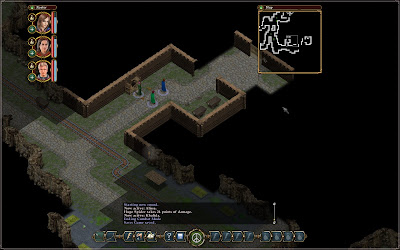 Avadon is a huge fortress on several levels and it took me some time to explore it and talk to all the NPC:s. It was possible to get some sidequests here before I made my report to one of Redbeards lieutentants. It was decided I should return back to the outpost to help out the commander personally and act as the reinforcement. While at the fort you are alone but as soon as you use the teleporter stones to different areas you are allowed to bring two or more allies. Even if you don´t bring some of them they will still get the same amount of experience as the ones you take so you won´t feel you have to choose early which will be your permanent followers. This is a good thing. 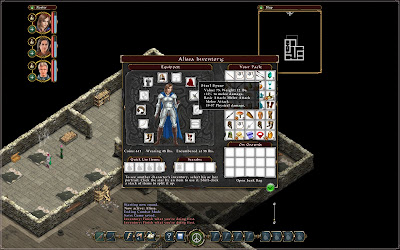 I won´t spoil much more of what has happened except that the story is one of the strong points. The texts and dialogues are well written without feeling like they are too long or boring. That was the case for me in Pillars of Eternity. I am now at level 11 and have done at least a dozen sidequests and progressed in the mainquest. The game still feels fresh after around 6 hours into it but I have no idea how big the game will turn out to be.

I will return in another post about how the combat and magic works in the game.