I admit. I am hooked by this game. I have put at least 30 hours into the game by now and have just reached level 4. I have slowly progressed the mainquest. I am still in search of the missing Packs family and during my investigation I have found out about the dark history of Darkwood. Massmurders have been comitted here and there are necromancers working their foul arts in these woods. I have found a stone tablet with inscriptions which I eventually got translated. The information pointed me to explore a necromancers tower in the south of the starting map. That was my first real challenge in the mainquest but a very rewarding one.

For the first time in the game I had to progress and not just avoid tougher obstacles as is common in this open world RPG. The tower was filled with ghosts. Fortunately I had found a necklace which deflects some of their chilling effects and I got my hunter skill level raised to two which meant I could get rid of my wolf pet. I trapped a bear instead and he is tougher but slower. Together we slowly explored the tower.

After the first level there was no turning back. It wasn´t possible to use the trapdoor to get out. I had to move forward. I was a little nervous about that but hoped everything would go well. Level two was a huge labyrinth which led me to many dead ends but with the help of the automap, patience and lots of food (remember you consume food, drinks and stamina (rest) allt the time). In the end I met my first "boss", a skeleton king.

What followed was the most interesting battle in this game so far. He was much stronger than me but by hurling fireballs at him whicle my bear clawed at him and tried to slow him down and by always retreating out of melee combat, I was able to slowly drain his energies. Pretty fast my mana dropped to zero and I had to run away to keep my distance and get myself time to drink mana potions. My pet bear also died pretty early. I then used my stun/freeze spell on him everytime I needed to drink more health and mana potions and run away to keep my distance. Sometimes the Skeleton king hurled fireballs at me or tried to stun me instead of moving forward. Those moments where critical but I always managed to get out even though my pool of potions was about to be depleted. At one time I had trapped my self into a dead end and saw the face of death emerging at me. The skeleton king was now weak but so was I. I finally mustered my last mana strength and used a teleportation potion on myself and by that I got on the other side of the king and could keep running away. Finally he died. It had cost me dozens of expensive potions but it was all worth it. Not regarding XP but by a few good items and by progressing. 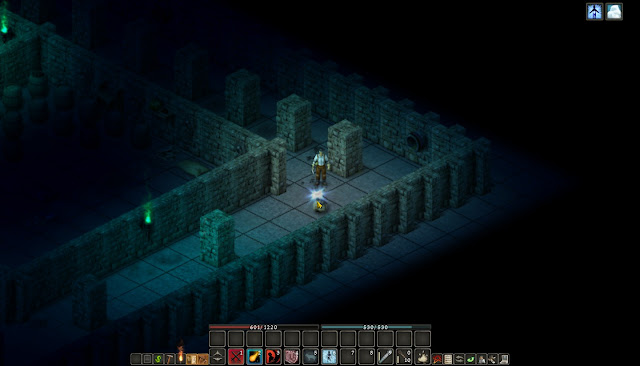 After that I continued to level 3 and now I seriously thought it was all over for me because - as I said - I could not go back. This time the level was filled with ghosts and skeletons. These are tough fights for me and I don´t have any stock left of mana and health potions. But then I found out about the solution to all of my problems. There where an electrical bolt shooting out from one of the walls. By luring out my opponents one at a time right into the shooting range of the bolt I could get them killed in no time and by no efforts by myself. When I got rid of all the ghosts and skeletons I could examine the rooms on this level and found a few interesting items.

The last room had I explored summoned Lord Benedict, some sort of Lich. This time the combat wasn´t as easy as before since he was immune to the electrical bolt. Instead I used one of my speed potions to always keep my distance from him and hurling my fireballs at him while also freezing him from time to time for my pet to inflict some melee damage. By the way, the pet could always be resurrected by a phoenix egg or better yet if you find the phoenix ring you have unlimited uses of resurrections you can do. Be aware that this is not possible during combat though. 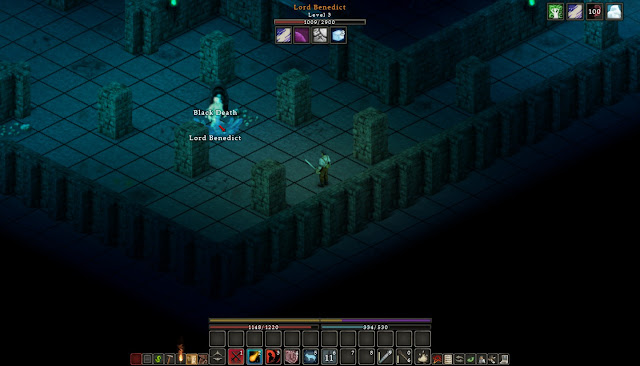 With my last potions I killed him and looted the whole place. I found some interesting gear and documents which I brought back to my village to be translated. I had found documents that the village leader Arlo have had dealings with the necromancers but when I confrtonted him he didn´t want to say anything about it. Instead I got the lead to go to another village in the far east to ask the elder there, Kyler,  about this. 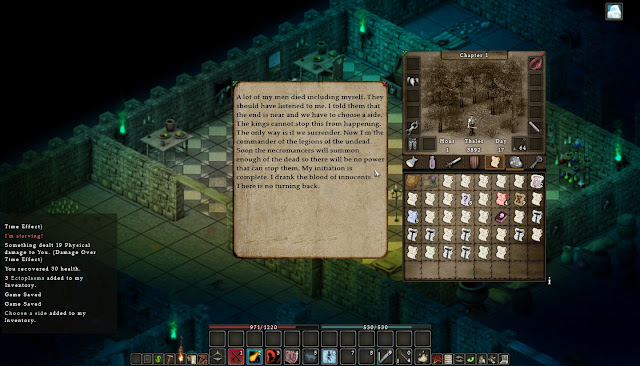 Now was the first time when I actually begun to explore the other three parts of the Darkwood forest. There is a teleporter in each of the maps which you could use to fast travel between them. You could also walk if you wish to but that takes considerable time and amounts of supplies. Not to mention all the hazards you have to avoid on the road because the forest is filled with spiders, mantis, larves, wolves, bears and other creatures. All of them strong enough to kill you unless you have a full amount of mana, health and your pet ready.

On the other hand, the minimap only shows a few of all the interesting places there are so if you want to find the most interesting items and loot you must explore the wilderness. There are a lot of interesting places such as caves, ruins, graveyards, monster nests, strange portals or just pure puzzles. In the beginning I just run around and made a note of where they where since I was too weak to tackle the monsters. Now I could explore perhaps half of them or use some sinister tactics like using a speed potion to run through all my enemies, loot the place and try to escape. 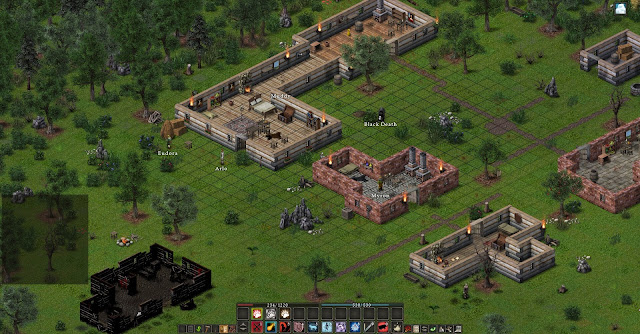 My intention from the beginning was to play a pure mage. After having read the forums at Steam it seemed that might have been the hardest class to play but only a few days after launch the developers increased mana regeneration outside of combat with 50% which does make it somewhat easier since you will recover faster after every fight. I have still saved at least 10 LP (Learning Points) because I have not been convinced a mage is a good choice. Almost always you run out of mana long before any enemy is taken down which forces you to go into melee. That requires me to get he best melee weapon I can and also the best armour. The problem is that better items require a certain level of base attribute which means I can not only invest in Intelligence and Wisdom but Strength as well.

I have decided to wait of the ultimate weapon or armour which requires a certain amount of attribute points to use and then I will invest my hardearned LP to enable using it.

Some other reflections of the game: 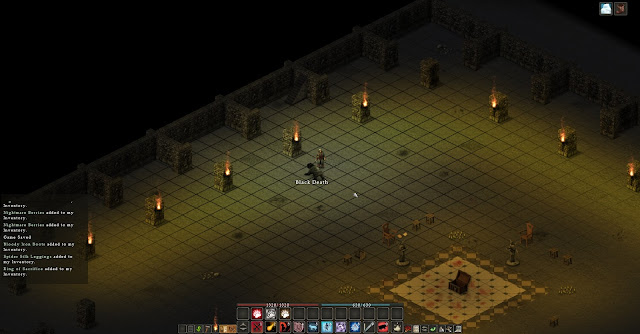 When I finally discovered the other village in the east I was hindered to meet the leader Kyler by his guard unless I proved trustworthy. I could do that by recovering a lost family heirloom ring which was lost in some ruins far in the southwest Darkwood. The ruins was full of spiders and I searched it carefully for the ring but it turned out it was taken by a spider queen. After a tough fight with mainly my speed potion tactic, I could kill the spider and retrieve the ring. Back at the village I had the opportunity to keep the ring or give it to the guard. Whatever your moral take on this the recieved XP didn´t matter.

After I had found Kyler I was filled in with more information about the Darkwood history. He said that Arlo have had dealings with the necromancers and met them in the undercity. The entrance is only accessible by three runes and Kyler suggested I would talk to another person about their whereabouts. I found this person and was give three leads to each and every rune. One was to find in a graveyard in the northeast, one guarded by a troll and the third in the crystal golems cave. 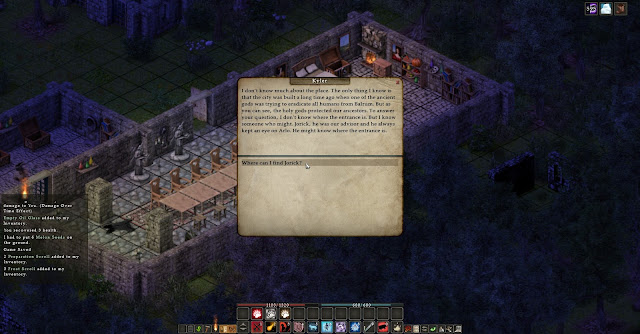 I have found two of these runes. The first one I took by force in the graveyard but the second one by using my speed potions to pass all crystal golems, loot the place and then return back without being killed by the golems. After my third attempt I succeded. Now I am looking for the troll.

I really like the game. It is a mix of Eschalon and Avadon but still unique. It gives you the right feeling when exploring and looting and have many interesting weapons, armours and sets as well as magical items. It is tough, hard and challenging but not too hard.