I´ve decided to make a sneak peek at Sword and Sorcery Underworld Gold demo version. The full game costs $9.95 and if I find the demo good I will buy the full version.

I had never heard of this game until my request came up for Indie RPGs. I am glad I did because Dark Disciples turned out to be a real gem and while I still want to play the sequel, I am also aware I might get tired of the much the same concept for another month or so. Then this game was suggested and fortunately it had a demo version available. So let´s see if it is any good. 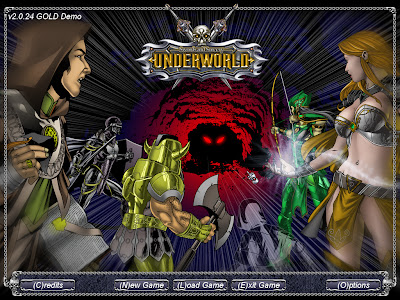 The game is developed by just one person and reminds very much of Bard´s tale and Might and Magic in the way it plays and looks. The graphics is dated but far better than in Dark Disciplines.


The short background for now goes something liket this: The world is in chaos. Mysterious creatures has appeared and created chaos. Refugees have fled to fortified towns and food is scarce. In the middle of this six adventurers decides to do something about it. That´s about it. 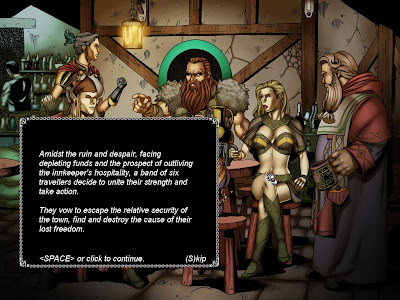 You create a party of six characters from a few classes and races. Classes consists of Knight, Archer, Priest, Thief, Sorcerer and Paladin while the races are human, elf, dwarf and gnome. Each class has some unique skills that you will aquire later on like stun or berzerk.

The races don´t seem to affect the starting statistics at all but have one unique ability. Humans have a relative immunity to mind influencing spells and Gnomes are given +30% to thievery for example.

Since this is an old-school RPG you can roll your statistics how many times you like. I like this but also get stuck in such a process for hours before I am finished. I rolled up a party from each class but switched the Paladin for another Sorcerer.

When I had assembled my party we started out in a tavern in the starting town. The game supports mouse but shortcuts is the easiest way to navigate. You could run the game in windowed or fullscreen 1024*768 mode. Even tough I run on the fastest gameplay settings, every movement step in the gameworld is still lagging a bit. 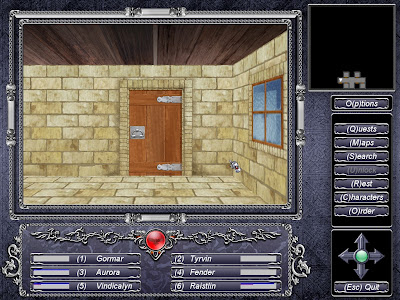 I have no idea if time is passing if I am standing still or only if I am moving a step but random encounters do occur when moving around as well as there are fixed encounters. They play out in much the same way as expected in a game very Bard´s tale like. More of that later.

In the beginning your quest log shows you only one quest and that is to reach level 2 with your party. After a few hours I did but never got any information about that I had reached my goal. The quest just dissappeared without any notification. Strange. I would have prefered to have been notified of a quest being completed. 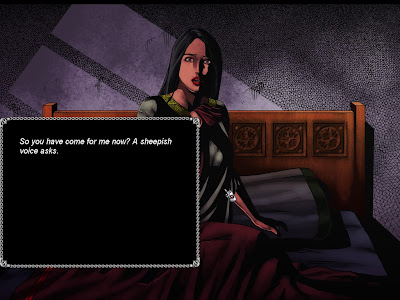 Here and there illustrations adds to the atmosphere of the game to tell of certain events or to add flavour to an NPC you meet. What immediately strikes me is that random encounters is far less frequent than in - say - Dragon Wars or Bard´s Tale 3 and that is a very good thing. Nothing can turn away my interest faster today than constant, tedious random combat that´s only there to slow you down in a game that tries to hide its small size. 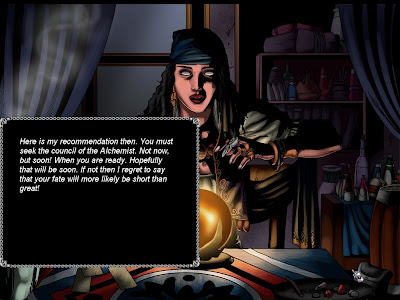 What I was really impressed with is the automap. Not only is it easy to use and follow - always visible in the upper right - but when you view the entire map, locations are automatically numbered with a short description for the place. You never need to remember where certain locations are on the map. Great!


So what about combat then ? Well, it is turnbased just like in the Bard´s Tale series and you have about the same commands to use. You could switch orders, fight in melee, shoot distance weapons, cast a spell, wait etc. There are also some commands like shove that I haven´t tried yet. Initiative order depends on the speed attribute of all combatants. The thief could sneak into the shadows for one turn and the next execute an assassination attempt which does tremendous damage. 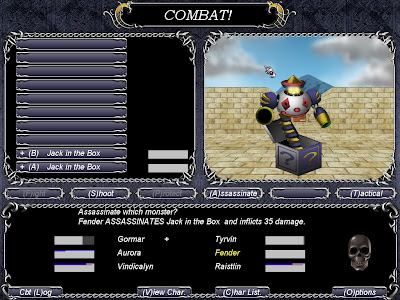 Thank god that Magic is a little more user friendly than in - say Bard´s Tale 3. You get a list with all your spells per spell level and just choose the spell you want with a shortcut. You can also get ingame description of what every spell does inside actual combat. Thanks! That´s something that I have lacked for these types of games. Even Devil Whiskey didn´t have it.

After a few hours into the game the combat begun to feel tedious. Especially since descending down to the catacombs. It was then I discovered there is a sort of fast combat mode you could activate that lets every partymember attack the first monster by melee or ranged weapon without using any magic. For combats you expect to win anyway this is a good way to increase the speed of the game.

After combat you get experience points. Equal for each participant. You also often get some gold and if you are lucky you could find an item or two and runes for sorcerer to use. Runes are used to cast sorcerer spells. It´s like a commodity that you must have. The priests have something called holy water instead. They get it by transforming ordinary water by a spell to holy water. In this starting town I have access to two wells so that have never been any problem.

So apart from available spell points - which are regained by sleeping or using items - you need these commodities as well. 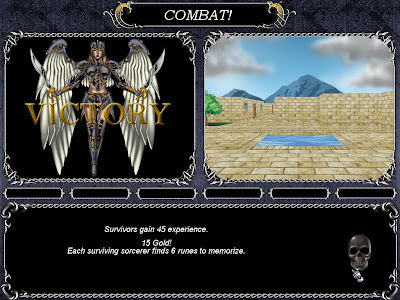 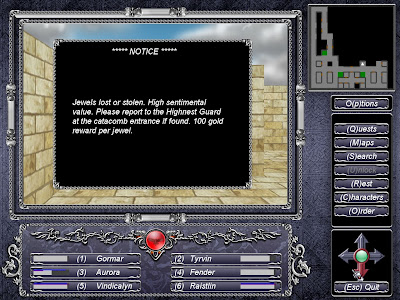 In the starting city you have a temple (to cure you of poison, disease etc) and a shop where you could buy ordinary starting weapons and armour as well as some specially imported items. Here you could also sell your loot. All items could be examined to give more information about them. One really good thing about the game is that it actually states how much damage a weapons does, what effect a certain item has or how much armour a piece of iron give you. I lacked that in Dragon Wars.


You have the possibility to use search. I have only used it once for success when I felt it could be of use. I suppose you run the risk of random encounters when you do or I would have used it on every square. 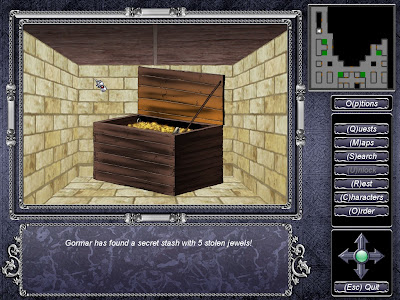 When it is time to raise a level you have to pay gold and then your are presented with a random number of increase for each of your statistics. It does seem to value your primary attribute depending on your class but otherwise it feels very random. So random in fact that I of course reloaded several times for each character that was about to level up just to get a good roll. It´s not one or two points of increase we are talking about here. You could raise as much as the starting rolls gave you so they seem important enough. 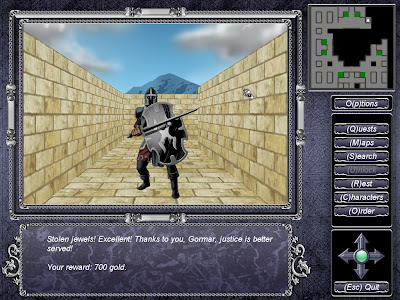 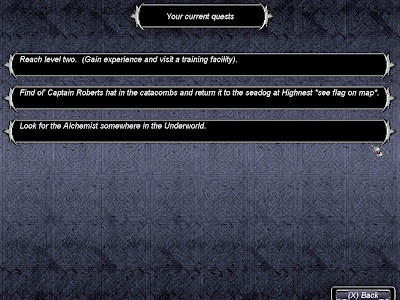 Accessing partymembers are done by pressing the keys 1-6. From there you see the character sheet and could trade or use items. What I like is that you have values for how much damage you do in melee and ranged combat. It makes it easy to compare equipping different weapons. You can have up to 9 items equipped and 9 items in your pack.


There is a shortcut command you could use to see the status of your party. It easily shows you if any member is diseased, dead etc and how much remaining spellpoints there is. Very convenient. 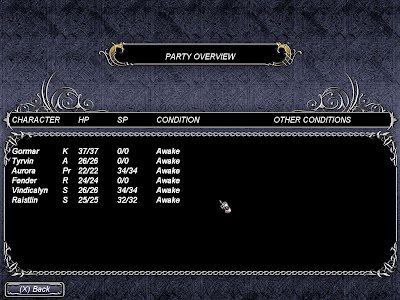 Just when I was halfthrough the catacombs and found some lost children that was returned to their mother, I was ready to level up once again. My party was now level 3 but when I tried to level up again I was informed this was the end of the demo.

I think my few hours with the game has given me all the possibilities to try to review if its worth to buy the full version or not. I can recommend you to try to download the demo here. 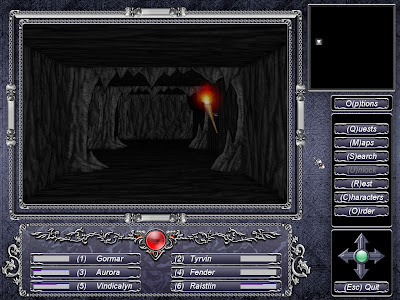 My only complaints so far is regarding some parts of the interface. At some places (like character sheet and rolling up characters) attributes are shown in different orders. Some shortcuts are not intuitive to use and at certain places I would like to stay on the same place in the gui. For example, when entering describe mode in a shop I wan´t to be able to continue using describe after having read about one item. Now I have to repeat the process to enter the describe mode again. And at other places I feel that there is too many keystrokes involved in doing stuff. But that are minor things overall.

I would also like the fastest gameplay speed to be even faster. You cannot steprun quick in any way. I am also afraid I might get tired of the fights eventually. The random encounter frequency is just about right now but if it is even increased a little more, I will be turned off. I would rather fight fewer but harder fights.

That being said, I think this seems to be a good game and well worth its money. The price is just about right. When first released it was twice the sum which I believe is too much. In Sweden you barely get a glass of wine in a pub for the same amount of money so its not much compared to that. Is it better than the original games that you could get for free today ? I don´t know yet. I´ll have to continue playing.

A sequel is already under development with improvements taken from all feedback.
Upplagd av Saintus kl. 2:12 PM