If you thought I would have given up on Ravenloft you are both right and wrong. Yes, it has been over a month since my last post but I had planned to continue my adventure when time allowed. Which is right now. And it was a very tough restart. To continue in the castle of Strahd with all the stairs leading up and down and never really knowing where to go was not the most attractive start. However, I did load my last save and I really did try to continue - alas with the help of a map of the castle and with some hints on where to go.

So after 30 minutes I felt like I was going forward again. I had already explored a large part of the castle. The problem was to find the stairs I had not explored yet when they are not marked on the automap. I found the last keys required to progress and finally found a prisoner in a tower that I released. He was thankful and offered to help me if I would contact his network in the village tavern. I also found another prisoner which I released which offered to join me but I declined. I never found Strahd tough. This wasn´t meant to be any final battle. 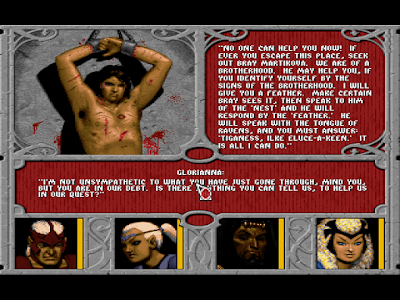 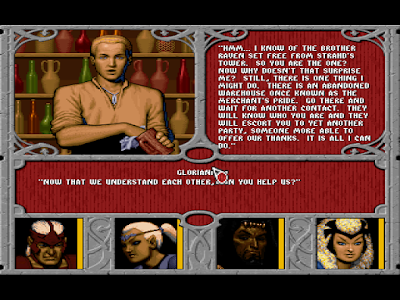 I was quite surprised that my only achievment in the castle would be to get a contact for the Raven network. I returned back to the village and immediately set out for the tavern where the raven group was said to be located. I had already been give a code word to say to the bartender and so I did. I was instructed to a meeting point in a deserted house in the village. There I met three people who demanded me to be blindfolded by using a drug if they would take me to their leader. I had no choice but to do as they said if I would like to get any hints of what to do. So I did. 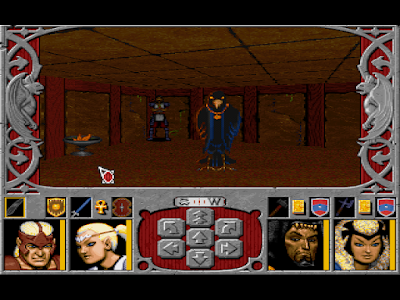 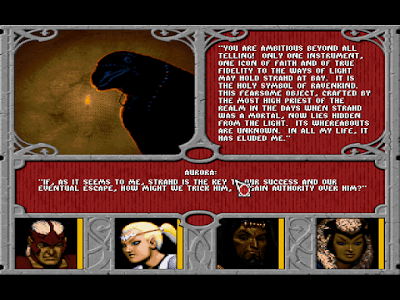 The leader - a Raven - told me that only one item could destroy the vampire lord Strahd and that is the holy symbol of Ravenkind. Noone knows where it is though except for the now dead priest Sasha that had prepared three manuscripts detailing the whereabouts of the symbol but in encrypted texts. The leader could give me a key leading to a closed door in the old church where he believed those manuscripts could be. He also gave me a scrying glass to decypher the texts should I find them. Needless to say, our new goal was to head straight for the church because I remember there was one door I couldn´t open there. There was only one problem. The meeting place with the raven had left me in the greater catacombs beneath the village of Barovia and I had to find a way out. It was a huge complex filled with terror.

In order to leave the place I had to find different keys that unlocked doors leading to my freedom but I was also told when I finally found a way out that I should carefully look for money to buy the vistani potion to pass through the fog that surround the lands. I had to go back down to the catacombs again and after carefully searching every place I finally found 15 coins which was exactly what I needed to buy the potion. I was almost to give up that search I can tell you and I had to check in an online map where my last two missed coins where hidden. Having done that we immediately headed for the church. 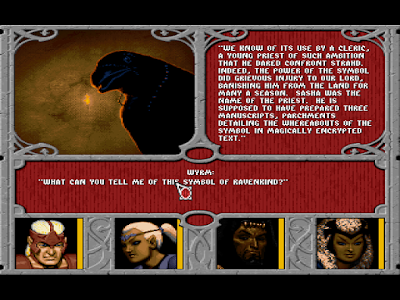 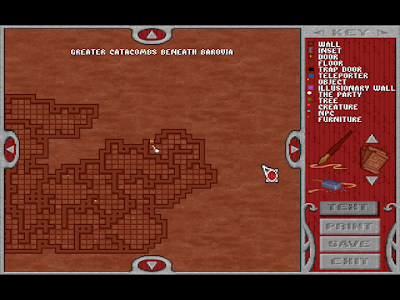 We quickly found the still locked door and used the key from the Raven which unlocked that part and led us down to another floor. An unexplored floor full of black horrors. Fortunately none of them had any level draining capabilities and I always used magic missiles against them. Most of them died by only one hit. Behind a few hidden buttons and secret doors I eventually found three manuscripts. I used the scrying glass to read them but was none the wiser except that I had to perform some sort of ritual outdoor.

I returned back to the village and took the opportunity to buy the vistani potion. This led up to a cutscene where we where invited to a gypsy camp with the intent of foretelling our future. But the fortune teller said one card was missing from her deck and we where not given any informtion. Back at the village, it was time to explore the foggy parts of the wilderness and perhaps try out the potion ?

I feel I am very close to the end but it still remains a mystery of how and where I will defeat Strahd. First I have to find the item but right now I am quite clueless on how to do that. My hope is that in the next post I will have won the game.