I´ve invested almost all my spare time into this game since my last post. I have played for over 17 hours now and it feels I have a pretty good grip of the game so far. Eschalon 3 takes place on a continent that is built up of dozens of maps that you will travel through, each with its own unique terrain, climate and atmosphere. From dense forests, to beaches, from loomy mountains to swamp regions. Scattered around these places are points of interests like villages, mines, goblin encampments, ruins, isolated cabins, shipwrecks etc.

As said in the previous post each step is turn based. Day and night cycles are implemented and affects the gameplay. In darkness you get disadvantages in combat unless you have good lightning source. On the other hand your ability of hiding in darkness increases so as a thief I would guess that could be a good thing if you want to sneak past enemies you have no chance of killing. Underground complexes are filled with different types of lightning sources and you could always grab the torches and use for yourself. Don´t try to lit them during rain though. And when speaking about rain and thunder, a spell like sparks inflicts a lot more damage during these weather conditions. There are more that affects darkness but this is just to reassure you that it is not only an esthetical thing.


Fortunately you don´t have to travel across each - already visited - map to get somewhere. Here and there you could find travelstones and touching them enables you to fasttravel to that location from anywhere above ground in the game. A very useful feature that also existed in previous Eschalon games. 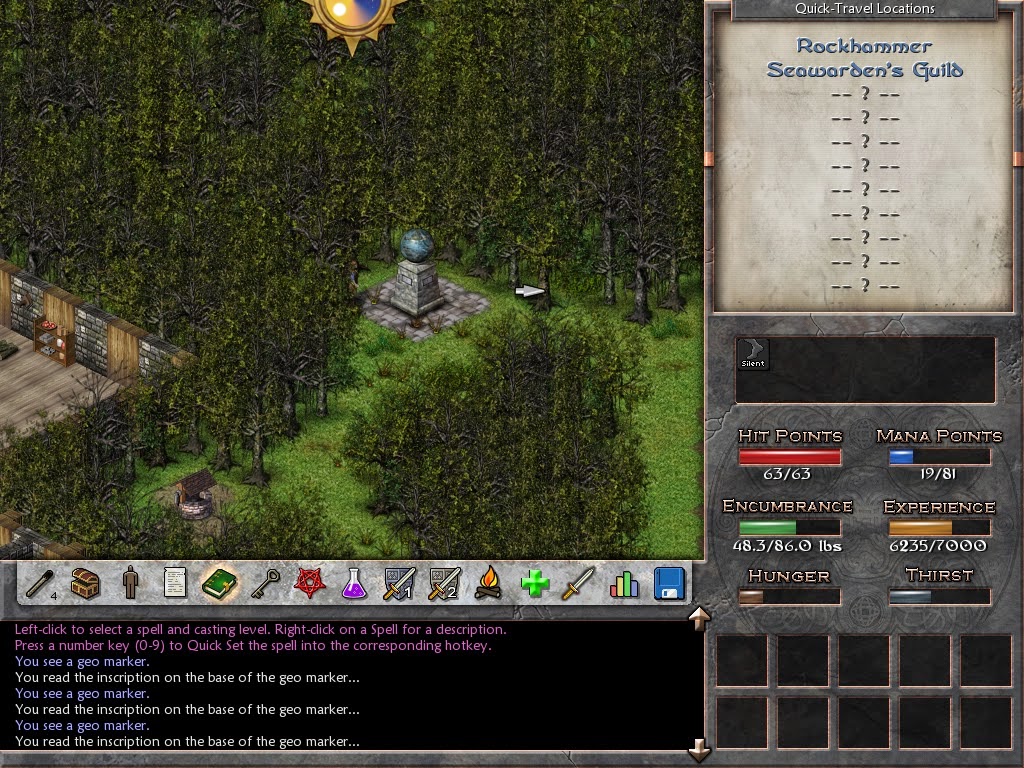 I have spent most of my time to build up my character and complete side quests and I am now at level 14. It is obvious when you reach areas with enemies that are too strong for you to overcome. Just retreat, build up and return later. Or use some sneak attacks to try to grab something useful before retreating. Since I am a mage I have no experience of using any melee or ranged weapon at all. I have had to totally rely on my spells.

You find or buy scrolls that contain the spell you want and you must have enough skills invested into the elemental skill (for mage spells) or divination skill (for priests) in order to read them. Then you must have a high enough intelligence in order to memorise them. The higher intelligence you have the more spells you can use at once. Fortunately you could "forget" a spell to learn another one if your intelligence is not high enough. This allows you to disregard lesser spells in favour of more powerful ones. But it also means you have to buy or find a similar scroll later on if you want to relearn it. A good tradeoff I think. 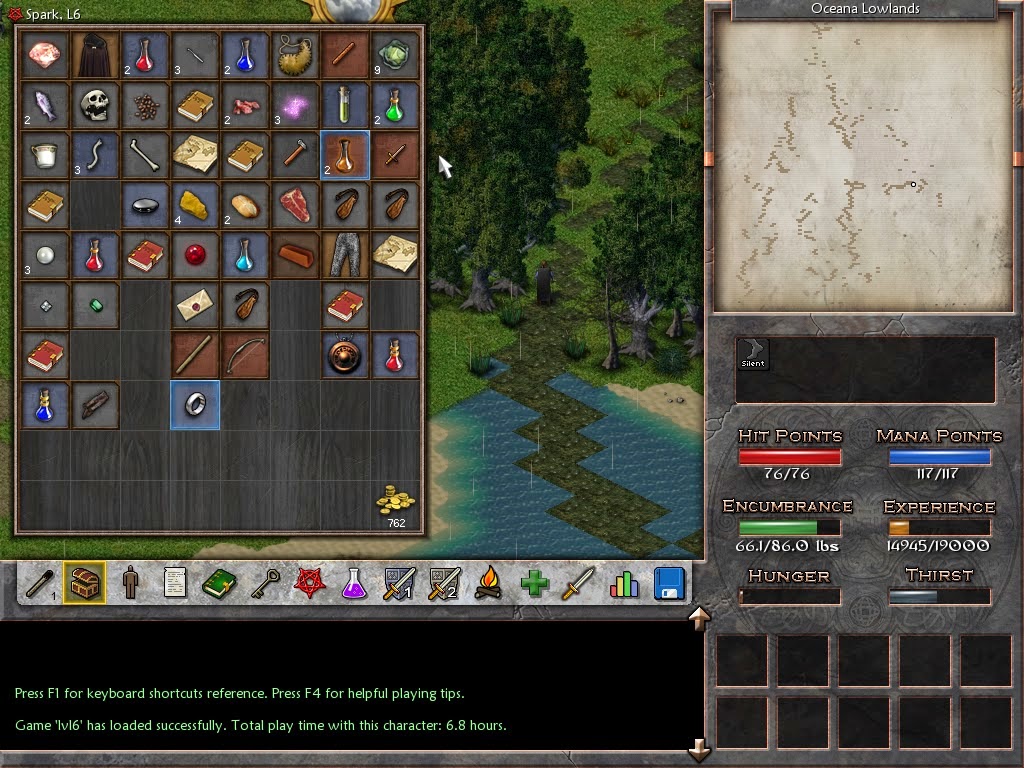 But that is not all. Once you´ve learned a spell you have to put a casting level into it that decides the power of the spell from level 1 to level 6. A spark spell - for example - might do 2-4 points of damage per casting level. But in order to put a high casting level into a spell your elemental skill level must be high enough. Everything is tied together. I have had to put all my attribute points into intelligence and perception to get more mana points and better mana regeneration points during rest. My skill points have primarily been put into the elemental skill, with a few points invested into meditation and medicin. The first is used to regenerate my mana points overtime and the other for health points.

I am extremely weak at melee and my aim is never to get trapped in a spot where I cannot flee. My tactic is to retreat when the mana is low and then rest to resupply my mana pool and get back into the fray again. The drawback of that is not that it is hard to retreat. It almost never are. Neither is it hard to find quiet spots to camp on. The problem is the food one is consuming during a long rest. Despite my forage skill I still need to buy some stocks to have with me for longer journeys. Money has not been any major issue at all in the game so far and even though there are quite some equipment in the stores to choose from it is not very varied. As a mage I am only interested in mage scrolls and light armour. Right now I have more than 3.000 gold which feels stable enough.

My only real goal was to find the woman who had been looking for me at the store and left a message that said I was to look for her encampment at the dunes in the west. After having done several sidequests and advanced a few levels I eventually found her encampment in the dusk. She had a fire going and was going back and forth. Her encampment was quite well concealed behind some rocky formations. When I stepped into the light she draw a sword and attacked me on sight. I had to kill her and found a letter on her body that she had obviously intercepted that was meant for me, written by Erubor Stonebeard. 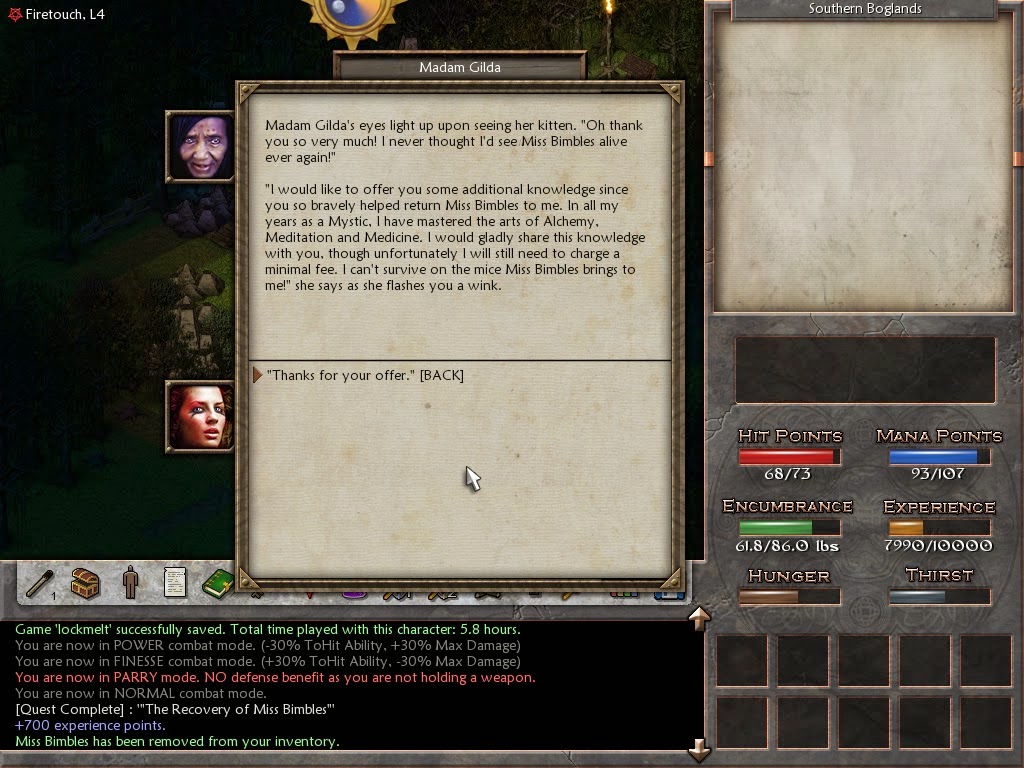 The letter said that the Orakur race - a race introduced in the previous games - was led by one named Malkur. He was in search of the four crux stones. I have the crux of fire with me and Malkur has the crux of ages. I need to find the other two. They are very powerful and it is not clear why Malkur want´s them except that they will make him too dangerous and powerful.

The letter said that the only one that might have more information about the whereabouts of the other two one Karamiklan the silver, an old friend of the writer of the letter. I should seek his wisdom. The problem is that he is imprisoned by a warlord named Alundar deep down in the Astral Range. I cannot just walk in and demand to see the prisoner. Erubors advice is that I find a gift to the warlord and then I might be able to visit Karamiklan. What that gift could be, he doesn´t know but suggests I travel to the town of Moonrise and speak to the owner of the Blacked bone tavern who might have some information. 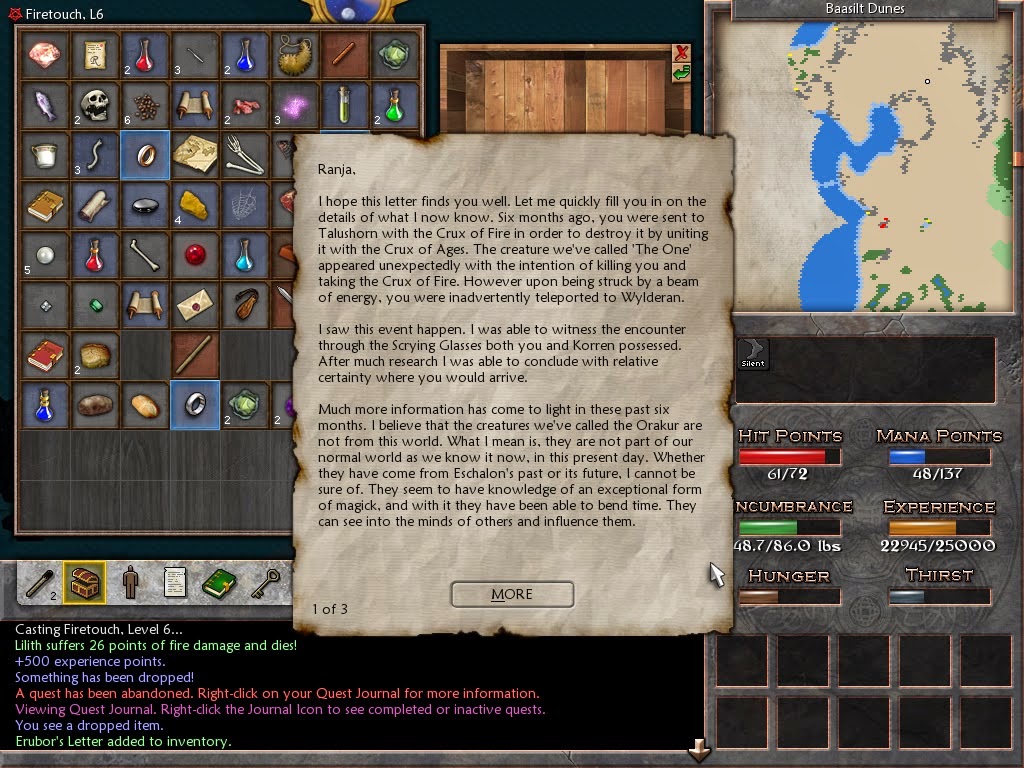 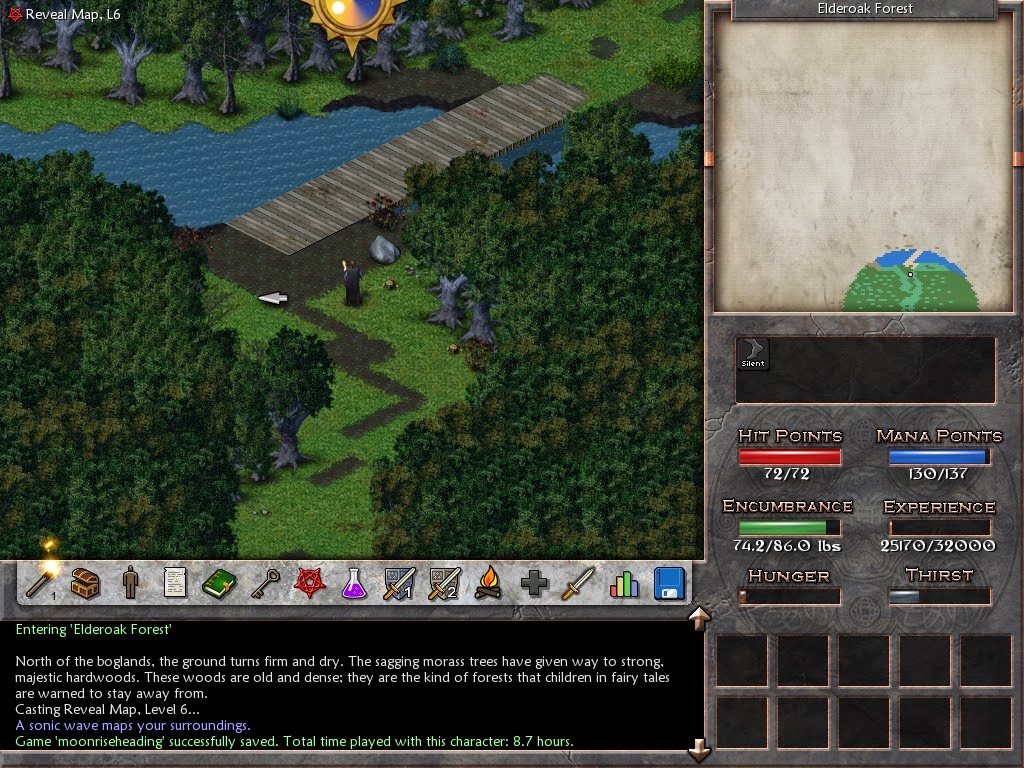 I have got there and even found the gift for the warlord - without knowing it - in one of my exploration trips to another island. Right now I have explored most of the main island and I haven´t found a way to reach to the warlord yet but I think the passage is to be found in a temple. In order to progress into the temple I have to find at least two important items elsewhere. One of them I have found, the other one am I still looking for. I hope to find it in a goblin stronghold. 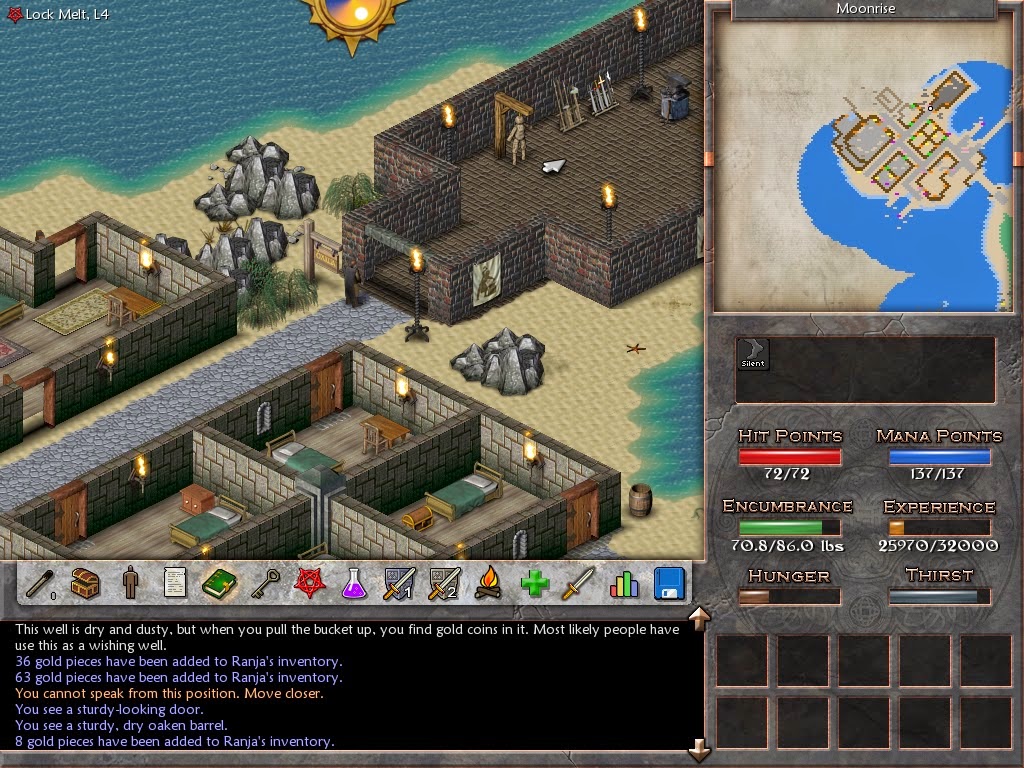 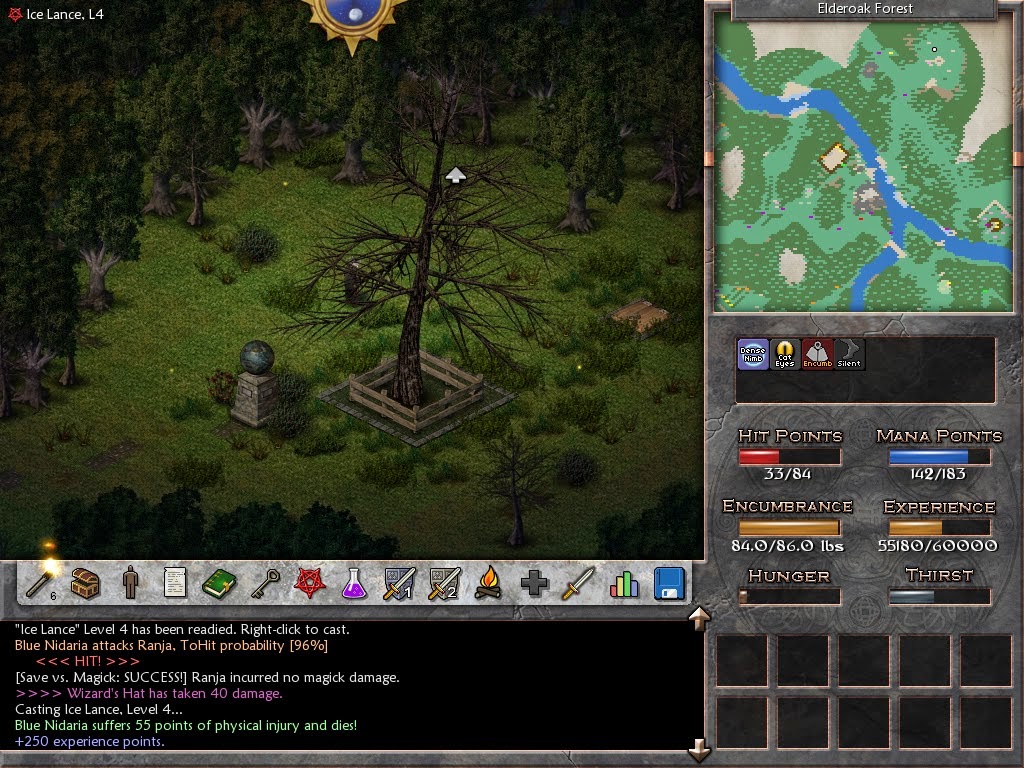 There are some places where you must solve at least some sort of puzzle or at least use some thought. For example, it took some time until I realised I could send spells through doors. If there is a lever behind I could switch it from a distance. That is how you must solve certain areas. At another one I found an illusionary wall that  led me to a secret place which gave me much needed experience points.

I have focused hard on my magic using abilities and can hold my own at any opponent so far at level 14. I am still having much fun with the game but I have no idea how big the game is. According to the maps I´ve found there is only the Astral mountains left to explore where the warlord lives but I haven´t found any of the other two cruxes yet so they must be somewhere else if not there. 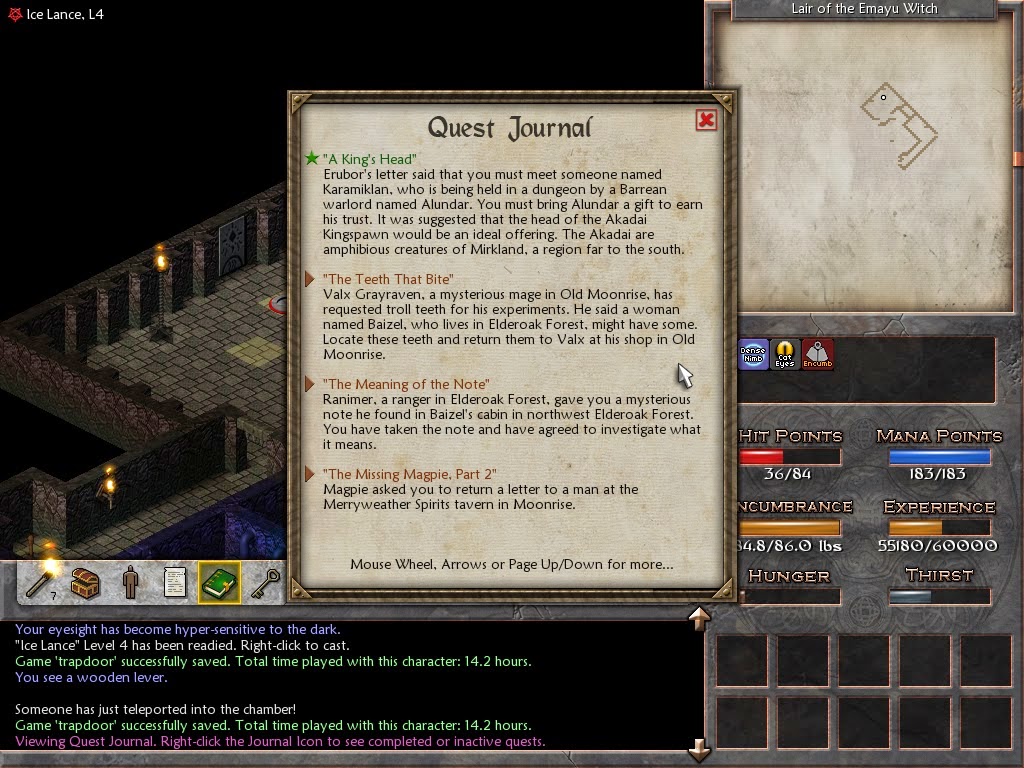 My next post would probably be somewhere near the end of the game. I still have had a really good time with this game but I hope it won´t get easier because neither moneywise or powerwise I feel underpowered right now.