In the year of 2000 Activision released a game called Vampire: The Masquerade - Redemption. I remember seeing it around and my interest was hooked immediately. Not because it was based on a tabletop RPG - I had never even heard of that game before. - but because I take such an interest into mythological creatures and love horror themes.

Of some reason I never bought the game. I was probably up to my neck with other RPGs at the time and the reviews of Vampire wasn´t ever very high, landing around 7/10 in general. When in 2004, the sequel Bloodlines was released,  I bought it but never liked the game. The medieval settings in this version is what convinced me to buy it when www.gog.com offered it for a discount a while back. 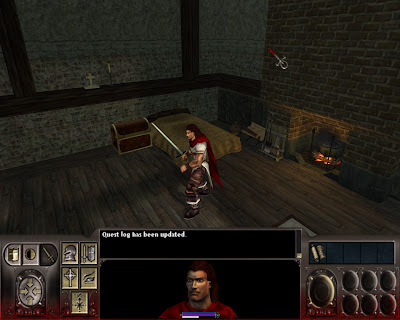 The game starts out in Prague during the middle ages. My characters name is Christof and I am a knight of the brethren. In the last battle I was wounded and brought to the city while my unit continued to fend off the barbarians. During my hospitalisation I am cared for by the nun Anezka to which I immediately take a liking. 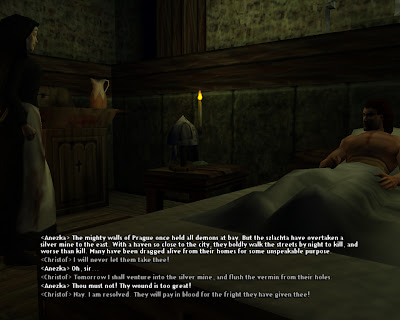 While sleeping I am abruptly awoken by a female scream in the middle of the night. I rush up from my bed and grab my sword to investigate. In the adjoining room two beasts threatens Anezka and a servant and I have to throw myself into my first battle. I quickly dispose them by constantly hacking at them one at a time. With the third mouse button I am able to make a more powerful attack, albeit slower. Soon the beasts are slained and the bishop enters the room.

He tells me of a series of tragic events here in Prague where the silver mines have been occupied by evil forces and forced the workers to flee or be trapped. Even the streets in Prague is not safe anymore because people goes missing in the night.

Of course I promise to deal with the situation at the silver mines but first I have to await the daylights. My only equipment is my sword. I decide to investigate what I can of the city before I go to the mines. You have an automap at your disposal that is showned below. 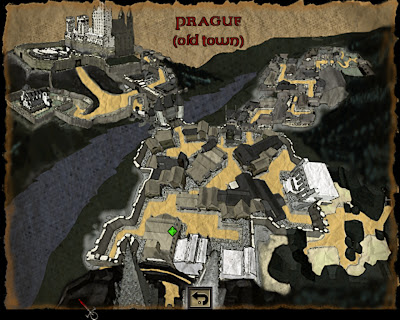 Places of interests will be marked automatically on the map but there is no way to fast travel between them. The city is divided into av few different areas and a few of them is locked at this stage. Most of the city is quite empy except for a few inhabitants with whom you could not speak. There are also only a few places of interests. I found an inn, an armoury and a store selling magical items. Since I have almost no gold at all I eventually decides to head off for the mines. There are however barrels here and there which you could smash and if you are lucky you could find potions or other stuff in them. 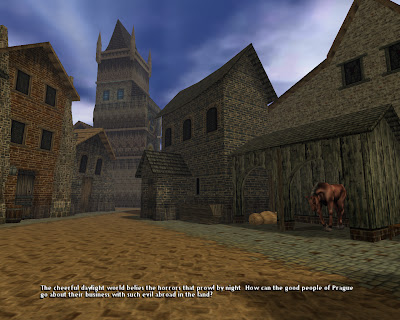 Outside the town the city guards mock me for my feeble attempts to try to do something about the overtaken silver mines but they give me a good luck before I am out of their sight. 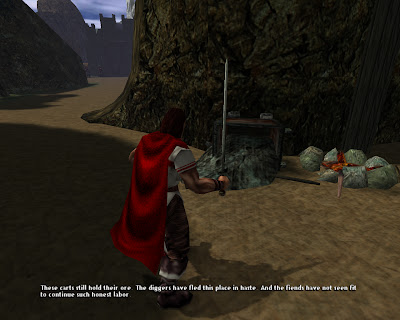 All dialogues are spoken and I think the voice acting is pretty good so far. Better than in Risen 2 for example. The dialogues are also not as inmature. Occassionally you are given options how to answer but I am yet to discover if you could screw up anything or if what you say affect the story.

The mines turns up to be just outside the city with no other areas to explore but to go straight for it. I enter the mines and save my game. 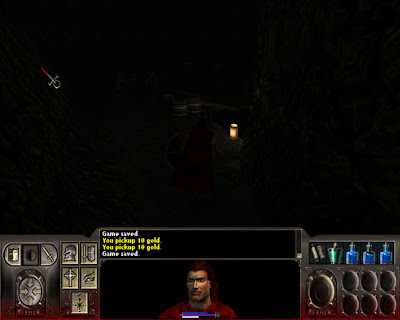 The mines are filled with beasts, rats, ghoul rats and ghouls. The latter of which could make you sick. Combat is conducted by holding the left mouse button on your target to continuously attack it or altering with more powerful but slower attacks by pressing the third mousebutton. You could not affect the outcome at all except to place yourself in a favourable position and upgrade your weapons or armour along the way. I found some light armour equipment and a mace that I replaced my sword with. A good thing is that you could easily see how much damage each weapon is dealing along with its attack speed and accuracy.


The mines consists of three levels that are pretty linear and straight forward. Even though your are allowed a few different routes here and there they all lead to the same place in the end. You don´t even have an automap below ground it seems. You have to fight a lot but not as much as in the Diablo clones. You occasionally find chests or barrels to smash that could give you better items but most of what you find are potions or gold. 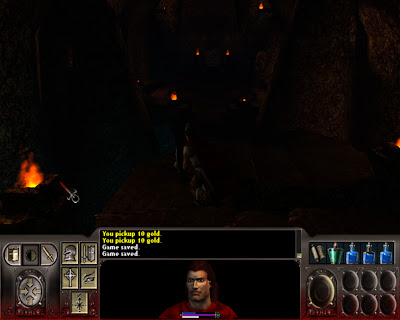 I like the game so far. It is an action RPG but there are a true RPG system below the surface in action and the manual is close to 100 pages. From time to time your character could comment the environment which add to the atmosphere.

The least level hold the one responsible for the infestation of the mines. Azhra is some sort of demon and this is my first boss fight. The fight wasn´t terrible hard and I think I only used one healing salve in one attempt. Overall the difficulty feels a little bit too easy. I don´t remember any way to set this in the beginning of the game. When you have more potions than you could carry and don´t use them or scrolls then - in my meaning - a game lean towards being too easy. Perhaps this is more like an introductory mission though. 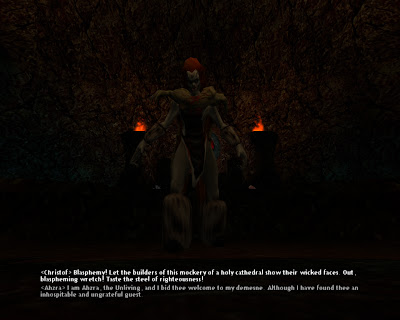 After having killed the demon I gained a level. That meant I was taken to the character screen where I had to use my experience points to buy increases into my attributes. Each cumulative attribute point got more and more expensive. I opted to increase my strength, dexterity and stamina in that order since I so far have good use of them.

When I return back to the city the Bishop is very grateful of my service but didn´t like Anezkas affection for me or my interest in her so he sends me out in the middle of the night to clean the streets of Prague. 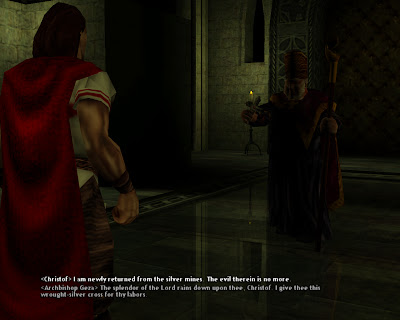 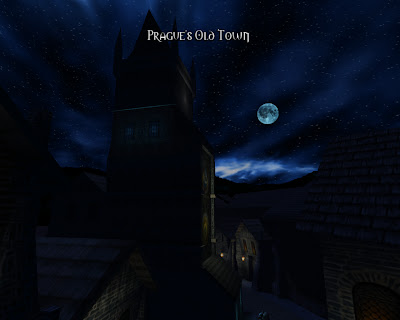 After a few fights of the small goblin like creatures in the city I was soon back again in the chapel.

There I speak with Anezka and in a long but diplomatic dialogue we confess our feelings towards each other but since this is like a sin my character flee and runs of from her instead of putting her into a very difficult situation. 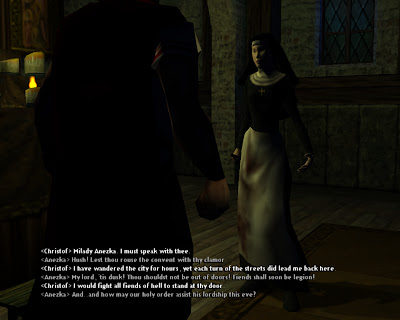 While fleeing the streets in Prague that night I was ambushed by a cloaked woman with tremendous strength. She told me it was for my best interest and that my enemies where looking for me. She bit me and everything faded.....


So far I am quite pleased with the game. I like the story, dialogues and voice acting. The character building have potential and the drive to get better equipment is there. The game lacks somewhat in content. Streets are empty, there are not much details in the environment but I think that has more to do with that this is a pretty old game after all. I had some problem to get used to the control of the character in the beginning. The game system doesn´t use w,a,s,d but the numeric keypad instead and you have to click on the ground to move there. Anyway I will continue to dwelve deeper into this game and reveal more of its underlying game mechanics in my next post.