So after my abrupt halt in the first installment, I started out the sequel, Abandoned Places 2. It has a larger 3d-view and better graphics. It even loads faster than the previous one. Good optimising there! It still takes one minute to save the gama and you still have to quit to reload a saved game but I can live with that.

Ok, so first I had to create a party of four. This time there is no restrictions that keep you from having two fighters, a priest and a mage. The system is a different in that there are several pregenerated characters in the classes fighters and mages. Mages have three different schools indicating wether their spells will be more strong in healing, offensive or a combination of both. With that, they got rid of the priest class. 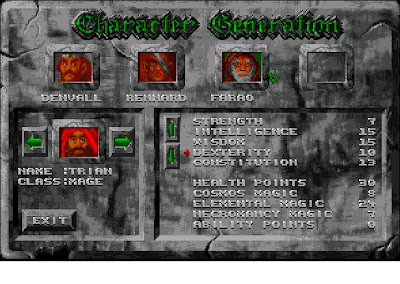 You have 100 ability points which you could distribute on Strength, Intelligence, Wisdom, Dexterity and Constitution. Ratings below 6 gives you penalties and above 13 gives you bonuses. Each bonus step costs much more from your pool of ability points than non-bonus steps. I created two fighters with 15 in both strength and dexterity and two mages, one in healing (necromancy) and one in offensive spells (elemental).


What I first noticed when starting was of course the new GUI. The gaming area is larger and the graphics better but after finding the movement keys I discovered it was very slow in responding to my keystrokes. That is the single most irritating thing for now and forces me to often double press keys. I have tried to beef up the  configuration a little to amend that withot having Guru Meditations, but so far with no success.

In your starting room you will be given your first orientation. The master has fallen to the ground and his followers urge you to find a healing potion for him before they will allow you to leave the place.


After meeting my first opponents in the dungeon we start out with I can only say that, combats is harder here. I have died several times in the first dungeon so far which is inabited by two kind of skeletons. Standard ones and the armoured ones. The latter could be tough when they come in numbers.


Levelling is done automatically. You don´t have to visit a place above ground and pay money anymore. That´s neat. Food is still an issue however. I haven´t found any piece of food yet so I am a little worried about surviving right now. I also have no create food spell.


Suddenly in my adventuring in the dugneon I started to get damage on every character without any enemies seen. Deep down in the characteristics I found out that there are food in this game as well! I hadn´t found or seen anything yet related to food so I didn´t think about it too much.


When you are starving the death is not far away. You have a few minutes until the party is dead - at best! What saved me was that I by coincident saw that one of my mages had the create food spell. He had achieved it during his last level up. It saved this game so I could continue.

Now the question is...this dungeon is not too easy to complete. I had to start mapping the area since I cannot find any way forward. There are illusionary walls and hidden buttons as well as some really good hidden treasure found here. But where is the healing potion?

When I had mapped the whole level I still couldn´t find any place I hadn´t visited before. Now the tedious part of searching every wall for hidden buttons or illusions started. I did almost give up but found a hint that led me to search a special area where I found an illusionary wall. It led me to stairs leading down. Hurray!

The second level contained yet another puzzle. Not only did I have to find a secret wall but in order to progress but I had to put weapons on a preassure plate to let another illusionary wall behind the first one become active. The new area revelad the first locked door so far but no key had been found up until now so I looked around for other paths. One path led me to a chest in the end with some topaz, a mace and burning oil. It even contained hidden teleporters that took me back to level 1 again without notice. That is cruel, because it takes time until you realise you´re back on an already visited level and it will destroy the map you are drawing.

The game is rewarding in its own right but it is not for the casual gamer. The constant food problem could be solved when you get the right spell at level 2 but all hidden walls and buttons could be very, very hard to find. The walls have patterns that are different for several sections so it really takes time to find a button.

However, right now I am just about to enter level 3.