Prophecy of the Shadow - Revisited

Back in 1992 I still owned my beloved Amiga 600. It was clear then that the PC-platform was growing rapidly into the gaming market and the most advanced games was first released to the PC-platform. I was a huge fan of the SSI brand both of their strategy- and roleplaying games. The title Prophecy of the Shadow was the kind of title that I was quite jealous of my PC-friends to have on their platform but time went and it was not until 1995 that I changed to the PC-platform. Now it is time for me to see what I missed during those years and I want to make a small revisit to this game. 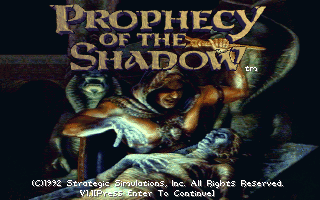 The game is fully mousedriven, uses one character and realtime combats. It is a lighter RPG, but still includes the classical ingredients like attributes, inventory, leveling and spell system. The game is designed and programmed by Jaimi RR McEntire. Rumours say there where an amiga version of the game but I have never heard of it.
To create your character you must answer a few questions. Each question gives you attribute scores to either health, magic, agility or a combination of them. I made my character Denvall to be more focused on combat and agility. 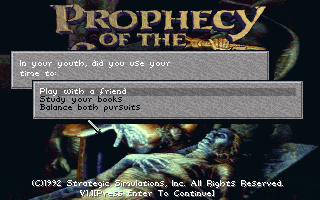 The game starts immediately by having an assassin kill your master Larkin who has taken care of you since you where a baby. With his final words he manages to tell you that you must take the text of the prophecy from Berrin to the Council in Silverdale. 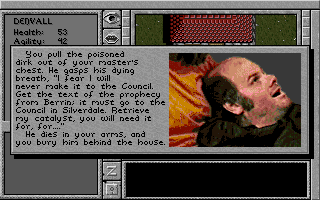 Before leaving the grave of my master I look around the area. My masters house is here on a small glade in the forest. The door is looked but by using search I find a key with which I hopen and enter. After having rested for a while I decide to leave. Now the adventure starts for real. 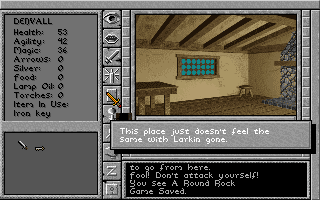 You have no automap whatsoever and I fear it will be easy to get lost or at least to not be able to cover every space. I don´t know wether the game was supplied with a map or not. I´ll try my best though. At the left side of the window is my attribute scores together with number of arrows, silver and other standard items of the game. The bottom left is the area where all my items are. In the middle of the screen is the commands. You could look, talk, attack, use magic, open doors, drop items, search, use items and sleep.
I use the numeric pad to move around and leave my home. I have no idea where to go and soon the trails splits up for new opportunities. I soon came by a hut that belong to Berrin, just as Larkins dead words said. 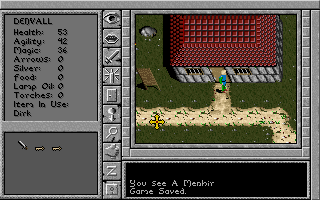 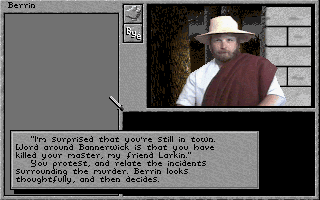 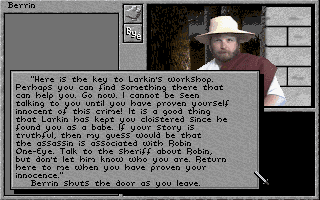 Berrin believe my story but is too afraid to be seen with me until I´ve cleared my name. I get the key for Larkins workshop and decides to try to find it out.
As seen in the images above the game used real characters for images and small animations. Back in 1992 that was quite new and astonishing.
After some exploration I came upon the village and found a jail, mercantile and a few other empty houses. After talking to the sheriff I learn that their leader Robin just has been captured and sits in jail. The bandits have some sort of hideout near the town but the Sheriff cannot do anything about it. There are also zombies to the north that are better to avoid. 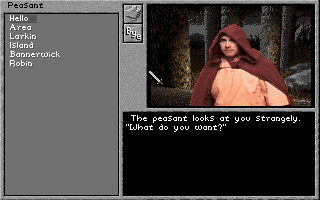 Talking to characters initiates a classical dialogue system where keywords get highlighted when you discover new things. I much prefer this system than the one used by some games where you have to type the keywords youself. I admit that adds to the challenge but could also be very frustrating. 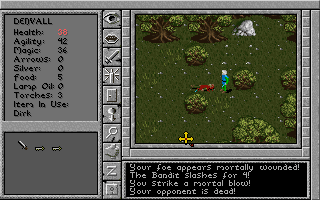 After strolling just a few screens off the village I was attacked by a bandit. The combat system is extremely simple. You don´t even click your mouse button. You initiate combat and then the system swing your weapon until either one is dead. At least my agility score is said to have an effect on the hit-chance.
The game reminds me very much of Times of Lore. The same simplistic system albeit improved in this game. Back in 1988 I played and completed Times of Lore on the Commodore 64 and loved it.
After looking around north of the town I came across the bandits hideout and managed to kill all the bandits outside. Most of them carries food and/or silver. The hideout was actually a cabin but when trying to open it I was requested for a password which I didn´t know at the time. Their leader, Robin, is however in prison and a visit their yielded password as a new dialogue option. He refused to tell me and said he had a dry throat and threw me out. Aha, I walked to the inn and bought a bottle of wine (only the most expensive one, otherwhise your character decided to drink it up himself) and then brought it back to the prisoner who told me "The password ? why, you have just given it to me!". "Gee, thanks!" I answered.

I was not the wiser. I thought I´ve automatically was given the answer and returned to the hidout but was forced to enter a word. I was without a clue. I had to check up that single thing in a walkthrough because I knew I had done everything right. Dumb as I was, the correct answer would have been the name of the wine which makes sense, but I did not just catch it at the time.


While exploring the hideout I had to fight almost 10 bandits and in the end met a Mage Hunter which is very difficult to kill. I think I will have to return to the village and try to gather some more silver in order to buy a better weapon. 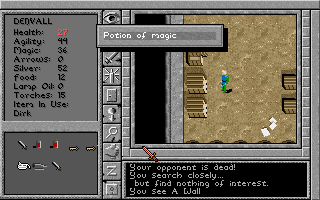 It turns out you don´t actually level up in this game. You increase your characteristics by using them. This reminds me very much of Faery Tale Adventure, which this game also reminds a lot of.
After returning to the village I sold everything I could spare and got enough silver (200) to buy a rapier. I went back to the hideout but had no chance to destroy the mage hunter so instead I went east where I earlier discovered a pit and used my newly found rope from the hideout, in order to get down the pit. It turns out I have found the gnome mages den. Here zombies are walking the halls. There where a lot of important items found here like my first spell (light) together with the catalyst that you must have to cast spells.
I really like the simplicity of the game. It covers most things except tactical combat and levelling. You need food to sleep and could only sleep when you are tired. You also need light below the ground. There are however no day/night cycles as in Faery Tale Adventure.
I´ve given this game three hours and it is well worth the effort put into this. Now I only have to sell off my stuff and get back to the pit again....