Anvil of Dawn - In the wake of destruction

Last time in Anvil of Dawn, I had just entered the underground city. My task is to retrieve several objects that in some way corresponds to the riddles the demon told me about in the sunken ship. Not until then will I be able to defeat the warlord and the only way is to destroy his pool of mana.

I used my standard tactic for exploring new places, which means I usually map the whole area before using any keys, pull any levers or preassure plates. In that way I get full control of what is affected. This level, however, turned out to be really huge and full of locked doors. The warlord had already been here and attacked with is minions. Ordinary people had been turned into blood spawns, a creature made of blood that attacks on sight.

Add to this moving piles of bones that attack and it is quite a frightening change for this peaceful tradepost. Many had fled the place instead of facing certain death, as advised by the citys' council. 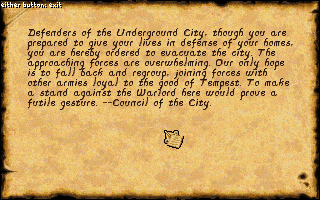 Many of the moving piles of bones contained keys that I used to open most doors on this level. Several doors contained treasures in the form of items, supplies and even new keys. Certain keys led to special places filled with magical items or better weapons. Among other things I found a greatsword that did 2d8 in damage instead of 1d12.

Though I am a mage I use melee combat 90 % of the time. The single most important reason is that it takes too long to hurl offensive spells. The animation following a casting spell lasts for around 10 seconds and even though the time is freezed during the casting, the amount of damage done is just a little bit better than a successful hit by my sword. That is a major drawback and something I will return to when reviewing this game. As it stands right now, a fighter has the best chance of surviving. Most of my skill points is put into magic but I am not using it to its fullest in any way because of this.

At some places I met NPC:s, like the little girl that survived the onslaught thanks to her mother that failed to escape. She now had contact with her father below who is trapped in the mines. Later on, I found stairs going down into the mines. There I rescued the father. He was looking for the heartstone there. He had a medallion that glowed when coming near the stone and he freely gave it to me. In this level I had great use of  of one spell that removed caved-in areas. The level was not very big and after half an hour I found a pink stone glowing from the wall without even noticing the medallion. This is probably one important ingredient the demon told me about. 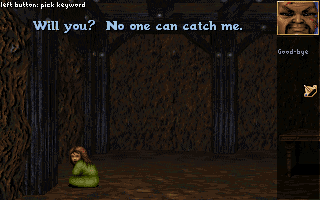 I also met an imp who belonged to a magician that fled the Warlords onslaught. He dreamt of spells and everytime I approached he got woken up. I later found an hourglass that freezed the time and by using it just prior to entering the room with the Imp I could listen in to his dream and learn a new spell called Fire Haven. It did not come to much use unfortunately. 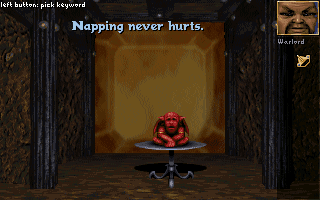 Another memorable NPC is the old man, a failed experiment to turn him into a blood spåawn. The creatures took no notice of him, probably because they thought he was one of them. He didn´t say anything useful apart from being an odd thing in the Underground City. 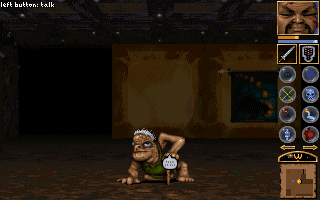 In the end the Underground City was huge and time consuming. There where several small puzzles but in no case have I found a lever or preassure plate that does something far away. They are usually very near to the objects they manipulates. Besides, the automap shows doors opening anyway, something which could be considered as cheating for old-school RPG fans. Apart from the heartstone I found some sort of spherical disc. I now have two of them in my backpack and I have no idea what to use them for.

Take a look at my character screen right now: 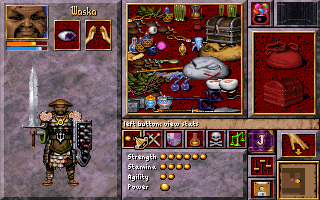 The items could be put on top of each other and it seems I could carry an unlimited amount. My strength determines carrying capacity and I am way over it which affects me by not regenerating any health and also gives me loss of strength and agility points after a few slashings with the sword. The amount of healing potions and mana leaves found is ample and - in my opinion - all too frequent. I seldom use them and instead use my heal spell. You could find chests or bags that could help you organise your inventory even better. Most fights are so easy so I have no use for any special items or magical wands found. This game is easy on the normal level (I don´t even remember if you could set difficulty in the beginning).

The underground city was the first place in which I could exit to different places on the overland map. I tried the north exit but got stuck before the Elder Tree. I wasted no time to figure out what to do but left for the western exit instead. 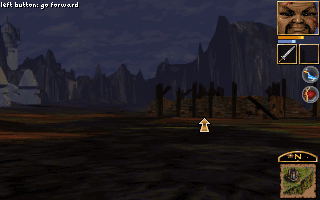 That lead me to The Barrier. I had no idea what it was or actually what I was doing there. It was just a natural way to go after the Underground City. I did find another adventurer on the overland map that was part of the four adventurers that started with me in the castle. He had failed to get across the Dark Lantern but wished me luck. He would - however - continue on his mission. 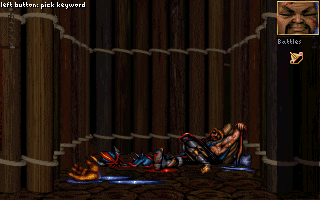 I am not sure what The Barrier actually is but it sounds like some sort of fort. When entering I found a mortally wounded soldier that told me what happened. The evil onslaught had attacked in masse and most defenders had been killed. The main adversaries in this level was sort sort of scottish warrior and colossal baboons (What is that kind of creature anyway ?). 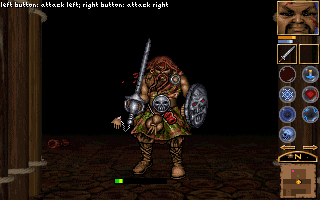 Two points of interests is worth mentioning on this level. First, you have the ability to free the Colossal Baboon king and his forces will then turn to attack the warlords forces. I freed him after having killed all other baboons so I don´t know about any effect of this. The other part concerns a small part of the barrier still held by human soldiers. They are outnumbered, wounded and numbers only a few, but still they offer to help with the few supplies they have left and are inclined to fight to the death. That made some impression.

The level was of normal size and the final solution was to press four different preassure plates in each corner to be able to open up locked doors that hide buttons. When pressed, those buttons opened up the last door leading to the western side of the overland. The only important item found here - apart from a very good hammer weapon - was another disc I believe.


While outside again it seems I can choose direction for the first time. I ended up to head for the Temple of Moon, but more of that in my next post.