Anvil of Dawn - The end of the beginning

When I entered the Temple of Moon, little did I know that what would first greet me was a speaking quill. In order to communicate I had to search for empty parchments. It then wrote me the story of how all the monks had been slained by the Warlord and his forces before moving on to other targets. The halls where filled with tormented souls of former monks that haunted me in my search of this place. Not that I did know what to search for anyway, but I don't leave any place or room unfinished.

Well, If I am paying attention I might know what to look for in general terms. The demon told me in the riddles. But since the game is so linear I think I will get the items one after another anyway.


The first level was not very big but full of teleporters. They often led to places with valuable items but I haven't found a better weapon than my greatsword yet. Amongst the magical items I have,  I currently use a chain that gives me +1 strength. I could switch it for a +2 power chain but I need my strength for melee damage and to be able to carry more items. I have been heavily overloaded for the past areas and I don´t feel like I would drop all my valuable items on the spot.

Since I am a mage I put almost nothing in strength. The result is that while I could carry around 80 kg, I am overloaded with 180 kg of stuff right now. That means I am encumbered and get tired very fast which means a drop in my agility and strength. It also prevents me from regenerating as quickly. But I have found so much valuable items that I want to save for when I really, really need it. Dozens of magical potions, wands and other stuff. Anyway, let´s go on.

Unfortunately there is no way to increase your attributes other than to find some items that does that. Your experience with spells and/or weapons only give you skill points to put in those areas.

When finding a stair leading to level 2 I found a speaking mouth that seemed to give away the solution to a coming obstacle. 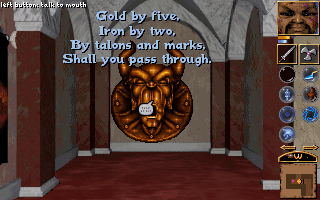 In this complex I found five gold talons and two iron items. All where put into doors to let me continue on the last third level of this complex. 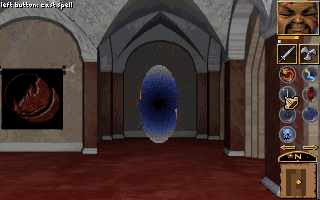 The end of this level was to reach the Lady seen below. I had earlier found some an item called sipher of tears and it was by accident I found out that I should use it on her to gather her tears. That is one of the essential items to move on. 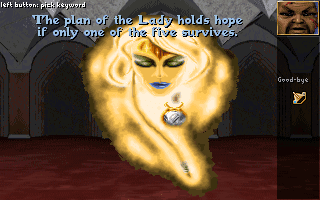 On my way to find another exit in the temple, I stumbled upon a mortally wounded female warrior. She asked about the other female companion before she unfortunately died. I could do nothing for her. The only exit from this place led right ahead to the City of Dead.

Not until now did I actually feel the growing difficulty of the game. The city of dead was filled with floating skeletons able to fire arrows at you from long distances. In order to get to them you had to take at least one hit and if you got stuck in long corridors with skeletons both in front and in the back, then you had a tough time to survive. This was the first time I used up a lot of my symbols to be sacrificed at the spell and health altar that litters most complexes.


It took me some hours to clean this place. The first level was quite straight forward but the small levels underneath, accessible by four or five different stairs from above contained more advanced puzzles. For example, a place filled with teleporters and preassure plates eventually led me to find a shard of ruby but it took me both time and effort to solve it. Not because it was logically hard but all preassure plates requires different amount of preassure to be pressed on. If you don´t want to go around with a sack of stones (and you don´t because it will encumber you), your only alternative is to use specific magical cubes that materialises above a preassure plate to press it down. But you have to use them only on rare occassions because they are hard to find and you really want to save them for places that is really important.


I came upon a tomb belonging to a prince. His spirit told me to release his lady that was kept from him by an  evil spirit. Probably below somewhere because I had not encountered any yet. In return he would let me have his armour. I had the option to capture his soul and I had found three soul houses in the temple of the moon so I was tempted to use them but decided to save them until later.

That turned out to be a good idea because below I found the evil spirit and I could - with good conscience - trap his soul instead which removed him and allowed me to free the trapped lady. She in turn could be trapped in a soul house but I let her free instead to return to the prince. I also returned to the prince who thanked me and allowed me access to his armour. I did try to trap his soul also and though he wasn´t too happy about it he sacrificed himself for the better good. The armour was really good, giving 50% damage reduction but it weighed 80 kg (my current armour weighs 12kg). I had to leave that armour behind overloaded as I´m already are.


Another place that was tough was the fire-based creatures seen below. I couldn´t use me freeze spell on them and they hurled fireballs on me so I took a lot of damage and healing potions in order to survive them. They inhabited an old throne room full of items. Most of them where quite useless though except of the ones laying in front of the empty throne.

The only exit from the City of Dead took me to the overland map where I met another of the four adventurers that set out from the castle before me. She was the companion the dying woman told about. Her hope was long lost but I convinced her to avenge her friend and she got new strength. She offered me another seal/disc she had found. There where noplace to go on this side so I backtracked through the temple again and back to the overland map.

Now, there where containers for the discs spread out in the land and I put my discs into them. I think I had five or six discs. When all was set a circle of stones lit up and allowed me transportation to a new place called Sanctuary. It looked strange and different from all other places so far.

This place was filled with teleporters and my irritating enemy - the Juggler! He jumps around casting skull spells at me together with the annoying tivoli sound accompanied. Add to that, some sort of yellow ninja creature on this level and it took some of my resources of healing potions and mana leaves to survive this place.

The sanctuary was only one level but had a lot of subsections accessible through teleporters from the entrance. I went through each and every one and there where small puzzles here and there. In the end, most teleporters led to chests filled with some sort of Dragon Icon. In the end I had six or so icons and nowhere to go except through a locked door in the entrance hallway. In order to open it, I had to put every dragon icon into nisches in the walls.

After that the door opened and allowed me two ways to choose from. The right way led to the important part. A room of trees and one who spoke. He gave me the item Beam of immortal clay and told me that all the ingredients must be forged together to build the container I need for the Dark Slag. The Dark Slag is the name of the Warlords magic pool ha has been given by the dark god. To forge my container I had to seek out the Black Gnarl in the dwarven mountains.

The other way I could choose had to be opened by a dragon key I found. Inside where three difficult yellow ninja types but it also had two chests, one which contained a very powerful spear named Steelripper that when thrown do 4d40 in damage (compare that with my greatsword of 2d8). So it was well worth the effort.

From here I could only return to the overland map. I could either search for another place to go or return back to the elder tree that could be reached by the north exit from the Underground City. I got to the Elder Tree. It had a drawbridge that was not lowered. I tried out several of my special items to no effect. I walked around it a little and found a boulder that blocked my path. I used my trumphet of earth and the boulder moved away, allowing water to pour in and spin a wheelhouse. That in turn lowered the drawbridge. I entered and now I am in the entrance of the land of roots.

At least now It feels I am coming somewhere. I would say I must be at least half through this game by now. Although Anvil of Dawn is very repetitive it is also extremely accessible and because of that my intention is to finish this game.