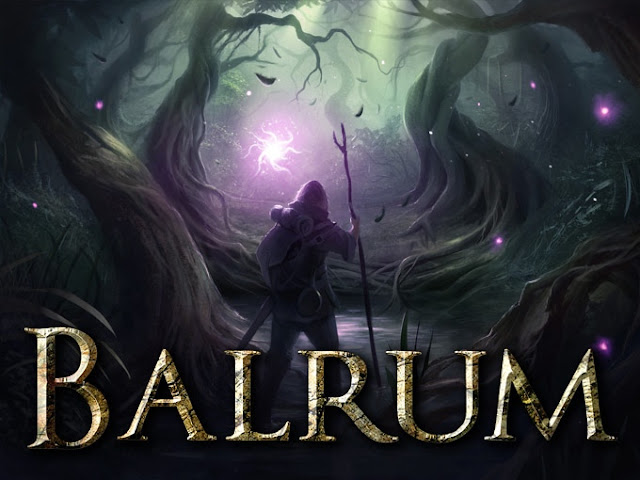 It took me less than a day from having found out about Balrum until I actually bought the game on Steam. I spent at least an hour gathering information about it and read some reviews. Both negative and positive.

I started up the game - which runs in windows mode only - and created a new game. The character process is quite straighforward and fits one page. By using the background story you decide to answer a few questions which gives you your starting skills.


I wanted them all so it was quite difficult to decide which to start with. Should I take farming since the game relies so heavily on eating and drinking ? Cooking ? No that sounds too lame. Camping in the woods with Surviving ? Sounds good to me. I also ended up picking magic abilities before archery or swordplay and finally choosed hunting before alchemy or smelting.

Lastly you spend some points to increase the five attributes in the game which are Vitality, Strength, Dexterity, Intelligence and Wisdom.  They all affect important gameplay features like health, mana, mana regeneration, damage and so on. I put all except one point into intelligence (to get more mana) and wisdom (to regenerate mana more quickly). The last one was put in vitality. Now I was ready to start.


The background goes as follows. 20 years has passed since my village fled the kingdom and took refuge in Darkwood. We have lived there peacefully despite the reputation of the Darkwood and with no contact with outsiders. But now, things have changed and evil lurks within. I have to leave Darkwood and explore the outside world again. In short, that is the background in the manual. You have been raised by your grandpa and just when the game starts things have happened. A family in the village has mysteriously disappeared without trace and a fire has burned down your own house as well as others but no one knows what started it.

I begun by investigating my own house and talked to my grandpa. During this conversation my food and thirs meters decreased so much so I begun to starve and dehydrate. I quickly had to find both food and something to drink. Fortunately they are in abundance in the village. Almost every place container, cupboard, chests or whatever contains some sort of food, ingredients, seeds or other type of material that can be used depending on your skills.

I learned from my grandpa no new about the fire except that it was not started near the torches so it seems it was by purpose. I had to talk to other people in the village about this. And ask everyone about the Pack family that supposedly had left for no reason and with no information left behind. By walking around and talking I soon aquired several small tasks that people would like help with.

You have three parameters to observe that are crucial to survival. Your rest, food and thirst meters. If food or water levels reach 0 you immediately take health damage. It does not take long until you will die from it. That has been one of the big critics of this game but fortunately just one day after launch the developers released a patch that 1) paused the consumption of food/water while you where in dialogues or shopping mode and 2) allowed a checkbox at start to be selected for slower consumption rate. Unfortunately that was after I already had started up my character.


Anyway, you also start with a pet follower, Jax, which is a wolf and will help you fight and you can give it basic commands such as following you, attack a target, protect you or just stay. You also have some pet abilities you can use and as mage I started with a few spells. Skills like hunting will allow you to tame other pets.


The first few hours I only walked around the village and talked to all people and gathered information about the disappearing Packs family and completed some sidequests like helping out in trivial matters. As soon as I wandered outside the village I had my first fights with deers, wolves and spiders. I was very weak and could only tackle one fight at a time before having to retreat back to heal my wounds and regenerate my mana. Mana regeneration is a slow process and unless you have access to mana potions you could very well have to wait a full day to restore your mana. 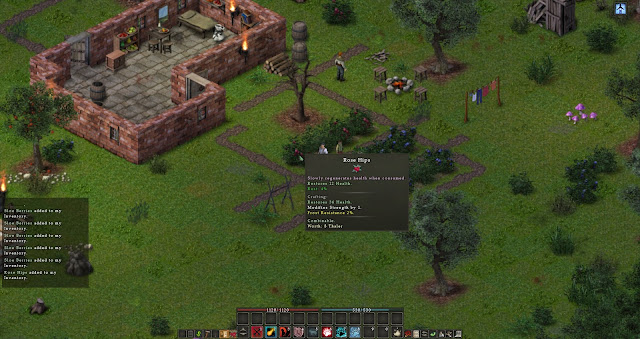 Eventually I leveled up to both level 2 and three but then I was at least 8 hours into the game. The story progress slowly and I found a rune tablet that I tried to interpret which sent me to different people around the map until I eventually was ordered to visit a necromancers tower to find out more. Such is my progress into the mainstory so far. I have concentrated to build up my character by completing sidequests since they give quite an amount of experience points compared to fights which give you very little. It seems that the strategy is to avoid fights unless absolutely necessary since you don´t wan´t to deplete your scarce amount of mana and health by fighting random monsters.

Right now the forums are discussing the choice of a mage in the game. It seems to be a very hard chararcter to play and I would not be surprised if the developers tweaked mana regeneration a little to its favor or increase damage dealt in some way. Because of that I have so far saved all of my learning points (you get five when you level up) since it seems I have to try to build up my melee fighting skill instead and rely on my magic abilities as a fall back option.

I really like the game so far. All skills in the game seems important but they are expensive both in money required and in learning points and you will never be able to master them all. You could progress in four levels into any skill, allowing you to get more powerful abilities along the way. I have only invested one learning point into alchemy level 1 right now in order to brew some rudementary potions but even I need to buy or experiment with recipes to brew anything valuable.

The world is literally full of items to pick up everywhere and it doesn´t take long for you to fill up you whole inventory which is divided between food, potions, materials, armours and weapons. You are also given a teleporter rune which you could use to return back to a peaceful place where  you could build up your home and grow your own food and farm. I haven´t developed that part yet since it also requires skills in farming, carpentry and other skills in order to actually do something there. 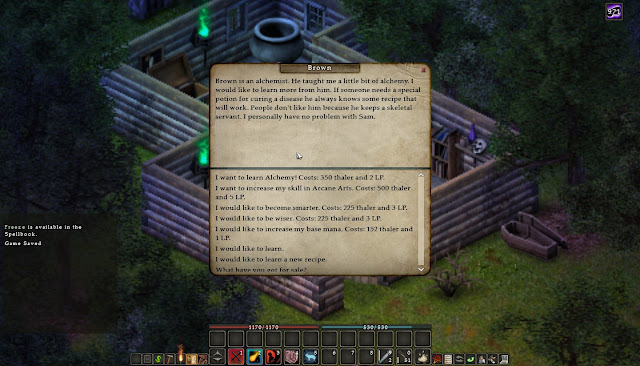 There are very few weapons lying around but a lot of ingredients, potions, food and materials. You could also find magical items that increase your attributes. I really like that they have succeeded in allowing for a lot of different character builds. I still don´t know how to best spend my learning points. Should I go for increasing my strength before getting swordplay if I want to build a melee figher ? It seems the skill swordplay mainly allows you to buy certain combat abilites rather than actually increasing your melee skill while strength directly affects your damage output.

The open gameworld is huge so far. You have a map and only see yourself as a dot on it. The map itself is divided into four parts with a separate loading when you traverse the sections. I have no idea how many such maps there are but each and everyone is huge and also take into accounts that there are underground places to visit as well. They even have puzzles here and there you must solve. Level progress is quite slow and requires you to complete at least half a dozen quests per level. New skills and abilities are expensive both moneywise and in learning points. You must carefully choose where to spend these. 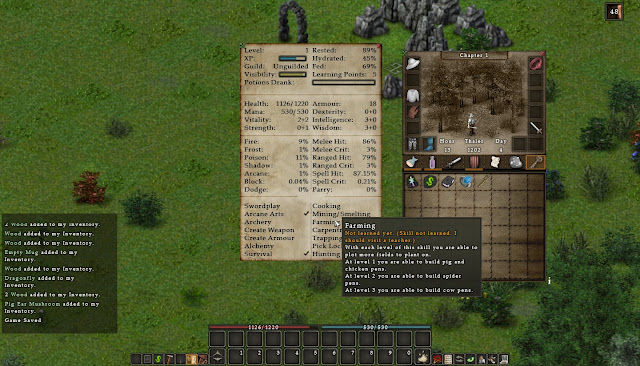 So far I enjoy the game very much. It reminds me of Eschalon but while Eschalons graphics where cleaner, Balrums graphics is more detailed and alive and everything moves in realtime except the turnbased combats. The price is also very attractive. The weakest part of its game so far is the dialogues and texts. They are simple and straightforwad with no excellence shining through in it s writing. I leave my comments about the mainstory for a later post since I have hardly started it.