Serpent in the Staglands - Won!

This Sunday night the 13th of September I "suddenly" won the game Serpent in the Staglands. I felt I was making progress in my last post but didn´t know it was so much shorter than anticipated.

The merchant at merchants guild in Corem told med that the entrance to the Bloodless lied in Lumen Forten, my starting place. I went back to the blood hunters in the northwest and told them my information. They thanked me and gave me the runes that would open this portal. They also offered to me one of their companions as a follower. He had a silver sword, neccessary to hurt the bloodless so I felt I had no choice but to take him into my team. I had to sacrifica Ruxandra for that.

I returned to Lumen Forten and found the two rune books. I drawed a rune exactly as the letter I was given by the bloodless hunters and got a vial. I already had the first vial since I somehow randomly drew the correct rune shape already in the beginning of the game. What I should do with the vials is another question because the portal opened just as well anyway. I entered and was confronted by a bloodless who arrogantly challenged me before he turned to a wolf and attacked me with his bloodless slaves.

This battle was pretty hard because it took awhile for me to understand that the wolf actually was the transformed bloodless and it could only be hurt only effectively by the silver sword. I tried to build up my team in different skill strategies until I understood that it was the silver sword that was the only decisive factor. After having killed the bloodless I exited his room to the wilderness. There I found a raft which I used to take me to land. There was no information or interesting items to gain here. I returned with my news to the bloodless hunters and they thanked me.


My next goal was to return to Ista Cale. The manor key I found at the lumber yard gave me access to the councelors house and in there I found a prison with a man that said he was a visiting councelor that had been taken prisoner by Octavian. The public where told that he was sick and would not see anyone. Since his cells was heavily guarded and I was attacked by sight I thought I was on the right track. I killed the guards, one at a time and got over 1.300 xp each. They are tough but the usual tactics always prevail.

The prisoner had no solution to his problem but suggested the constable might not be aware of what had happaned and might hold the keys. I returned and confronted the constable how denied any knowledge and didn´t believe me. I insinuated his knowledge of all this and he attacked me. He was easy to kill but had no keys and other surrounding NPC:s started to attacking me. I quickly returned to the prison to see if I could get more information now that I had confronted the constable. But no he just told me the same story so I reloaded.

Instead, I returned back to the prison once again because just before the prison there was a room with an attaching corridor of preassure plates. After a few steps on the plates a trap is sprung for over 200 points of damage which means instant kill. I found a way around by only walking on the plates along the wall to the southwest corner. But I could only manage one or two persons to get across that way. Then the trap sprung so I don´t know if it is random or based on number of steps or whatever. Anyway, I sent one character ahead to scout and eventually he reached the bedchamber of the counselor Octavian. There I found three interesting letters. Two from his sister Mya in the north. Octavian is undoubtedly a very mysterious and suspicous character. I also found a crank in the room which I brought with me. Then I headed back.


And now the interesting part begins. Because just when I entered the bedchamber, soldiers poured into the room where my other characters where waiting. A combat ensued and fighting four guards is very difficult with only four characters. Even five so I had to reload this several times.

I took my group out of the room so I could engage the guards manually. Then I started the fight but the problem was that I could not engage them one at a time as I usual does. And with 4-5 guards at ones it was impossible to win without at several of my party members dead. I reloaded and - voila - the guards had disappeared. That is, I had already got the documens and the crank from the chamber and withdrawn my other characters and saved. This was the first time a bug actually helped me because I don´t know how I could win this fight (you need the crank to complete the game, se below).

I fled the councelors house and begun to explore the western side of Ista Cale.The only reason for that was that I wanted to check out the closed house in the western part if something had changed during the recent events. On my way I passed a lighthouse that lacked its crank handle so it wasn´t hard to understand that I should put my crank there. I entered the lighthouse basement where there was a puzzle to solve. Five different levers had to pe pulled in a certain combination. I had already found aletter which said: Lighthouse: 12 or something like that. So I thought it meant I had to pull the first and the last. Of course, it wasn´t that easy and I had no other clues. After much search in the few forums that exists for this game it turned out to be lever 3,4 and 5. Then I sound could be heard and something clicked but I had no idea what it was.

I left the lighthouse and continued to the mansion in the west. The entrance door was now open (so that was the effect of solving the lighthouse puzzle). I entered and now started a very tough part of the game because inside it was not possible to save the game anymore. The first room contained around 4 guards that had to be killed. When you got to the second floor it was another round of guards and the third floor ended with a locked door. To open it I had to solve a similar lever riddle in the basement.

But here it was harder because you needed three different symbols to align. The bottom one I guessed was the one which was on the entrance to this building. But the other two gave me no clue. To try out all combinations would take too much time. I had to look for some clues online. It is hard to find but somewhere I read that I should use the same signs as was above each lighthouse. I had to exit this place (I thought I was smart when I exited after killing the guards, saved and reentered, only to find all guards back to place again) just to return and look at the signs above the lighthouses. The correct


When I finally succeded and cleared the area once again, I lost one of my fighters against the gurads but opted to continue through the now open door in the top. Here I met Octavian for the first time. He was my son and we talked a long time about him, his mother and sister in a very interesting and original story for the game before he in the end suggested that he could allow me to return to my godly form because he could restore the portal. In return he wanted me to sink the port city of Corem below the sea so that Octavians own city, Ista Cale would be the greates and most important trading city in the Staglands. He had great ambitions. The surprising part is that I had no chance of rejecting that offer since he tried to convince me that I was as bad as he was and counted all my misdoings and all that I had killed to reach my goal. I tried to defend myself but in the end I had to give up and accept his proposal. Directly afterwards I get attacked by my companions that I had soul binded. I was surprised at that. It ended with me having to kill two of them (they where very easy to kill so it was not their natural strength) and after that the game was saved and ended in waiting for the expansion. I very sudden and surprising ending I must say. 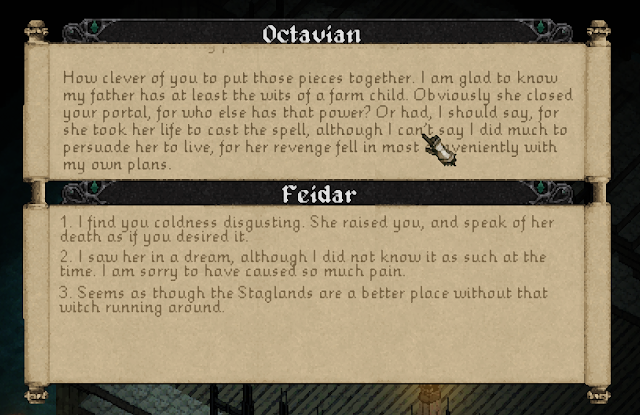 Now in the end I can say that I have missed a few places in the game. It was probably there I could get clues as to how to solve the lighthouse puzzles. For example, there was a tower in the bog I never revisited and a few strange places where I didn´t know what to do. But I am glad I didn´t have to do everything in order to win the game. The crucial map is to get to Lumen Yard. That´s all you need to quickly reach to the end like how this post begun.

I am looking forward to the expansion although I fear that if it is not released soon I will have all my time dedicated to another great game. In my next post comes my review of the game.