Serpent in the Staglands - Searching for a cause

My quest continues, although I am not still sure what I should do since I have no strong plot to follow yet. My main concern have been to stay alive and slowly improve my abilities so that I can tackle the outlaws around my starting position.

To do that I travelled south. First to the city of Corem and then to a port in the far west. They varied in size and I was down in the dock district and even visited a brothel. There you could hire two girls that wants to be rescued and are willing to join your team. Unfortunately I had already filled my slot of five adventurers at that time. It soon turned out that there are a lot of hirelings you could take on everywhere in the world. You never know in advance their level or statistics but some of them try to impress you with their skills. Some wants money and others have a short term goal.

In most towns there are shopkeepers (blacksmiths, fletchers etc) where you could sell and buy better equipment or fill your stock of arrows or bolts. I now use one of my partymembers as a ranged attacker with a bow or crossbow and one as a magician. The other three is melee fighters. You have a limited inventory so it is often I have to find a merchant to sell something. The good thing is that each item you leave on the ground will still be there when you return. 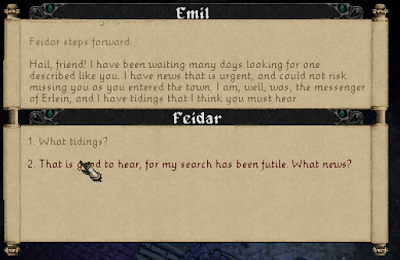 The first time in Colem I just explored the area and then left. By walking around through the wilderness and occasionally fighting ambushes I slowly gained more experience points. I felt very vulnerable and had to retreat from most fights until I found an NPC who actually had both high hitpoints, good attributes and skillpoints spent into melee fightning. With his help and with the few emeralds I´ve got I gradually raised to level 3. 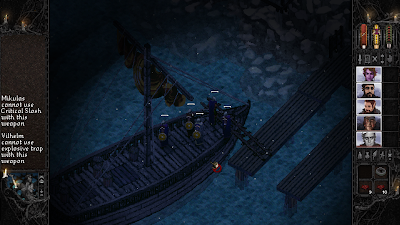 I don´t know for which time in the order but I returned to Lumen village and tried to beat the burglars in a house there. I had fought that battle at least a half dozen times before. This time though I retreated back to the constable that entered the fight on my side and after heavy fighting I won and got both equipment and well needed experience points. I then reequipped my group as best as I could and started to hunt down the outlaws and bandits in the Lumen wilderness. By being very careful I could sneak up and only engage a few of them at a time. After timeconsuming fights I eventually killed them and got some very good equipment. Especially since having found the guarddeserters that hide down there. They had very good armour and shields which helped me further to destroy the remaining bandits in the area. The feeling of being able to prevail after hard work is tremendous and I was soon up to level 5.

Combat in the game is very straightforward. Each partymember is designed its target and then they attack until the combat is over or until you retreat. You can put your party into a passive or aggressive AI mode. The later makes your party members attack the nearest enemy. They will fight using their characteristics of which the most important are attack speed, hit chance, dodge chance, weapon damage and armour class. Traditional parts. You get a short description of each members action result in the left pane. How much damage is dealt or if they manage to penetrate the armour of its opponent etc. 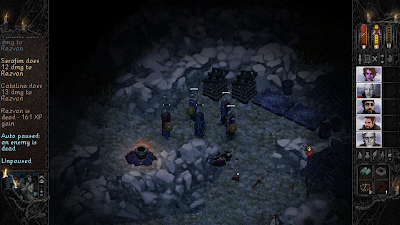 Combat works ok but you have limited tactical control. Enemies fights until killed except for a very few enemies that I saw failed some sort of moral check and fled. They will hunt you until they get to to you so it is impossible to flee. The tactics I use is to slowly get close to a group of enemies to only alert the first one to go after you. Another tactic could be to withdraw a heavily wounded character and let the opponent follow him around while the rest of the group try to land a hit on him. Yet another tactic is to engage an enemy from range with magic or missiles. I have even managed to attack with spells without the target even realising it. But that must be a bug. Either way, combat is pretty hard and it has taken me great patience to build up my strength to defeat even half of the encounters I have met. There are still random encounters in parts of the map which is impossible for me to win at this stage.

I have yet to spend any single skill points into combat. All skills affect very marginally your combat statistics. For example, you might want to put skill points into rapid fire as a ranged fighter. But for each skill point you decresae your attack speed very marginally but sacrifice up to 1 point of damage in return. I am not sure if it is worth investing say 5 skill points into such a skill if I get one more free shot in 7 tries but where every hit risks doing several points less in damage. So having not found any obvious good place to spend the few hard earned skill points, I still wait until I must use them before allocating them.

Magic works a bit differently than what we are used to in these games. There are no mana whatsoever. Most spells will continously be cast on a target until you cancel them. The effect comes after several "procs" of seconds. For example healing gives a healing boost say every 10 second if it is cast on one of your members during combat. That is long enough time for you to get killed so it is not as advantageous as it first seems. Also, you cannot move or do anything else while casting which makes your spellcasting members vulnerable to attacks.On the other hand it works well over time and is good at buffing your party or attacking an enemy if the spellcaster is protected by the rest of your group.

In magic I have the same problem of not having spent a single skill point. I wait by evaluating what skills to go for. You have to put points into strength and dexterity in order to reach grade 2 for melee skills and in occult and intelligence for grade 2 magic skills.


I said earlier I had trouble finding the mainquest. But I remember saving a screenshot with a text that said Erlein where going to the city of Corlem. I returned there for my second visit. This time I searched every place carefully and talked once again to everyone, I found nothing. Except to be blocked entrance at the shipping guild. I know remember the information that Erlein was to go there and was found dead so I forced my way in. There where at least a dozen guards there swarming over me. But my curiosity was rewarded when I found the body of Erlein in the docks. He had some documents on him but neither of them gave me any clear indications of what to do next. I left the city and started exploring the northeasterna parts.

I helped a town get rid of nearby witches and smuggled contraband to get some money. I also explored woods and farmsteads, fought huge spiders and in general explored as much as I could. I went to Emerald metalis and helped the counselor there to deliver a peace gift to the natives. I could not do anything else there so I continued my exploration and got to the city of Rumin in the north. There are some kind of war raging in the land and refugees are coming. But since I only get fragments of the story from time to time and there is no journal, I forgot about much of what I have learned.


Anyway, I am still having fun with the game and will continue to explore the world in my hunt for the mainstory and also to get better. I have over 2.000 gold right now but cannot find any merchant that stocks good enough items to spend them on. I hope I will find someone soon. 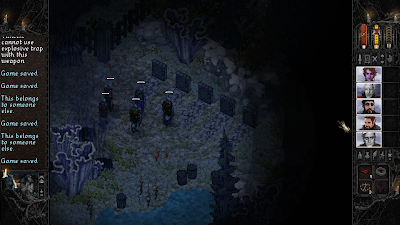 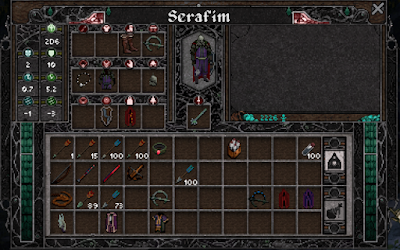