If anyone thought I was on the lazy side regarding Dark Disciples 2, you might reconsider. I have played for many more hours and dwelved deep into the game. Or at least, that is what it has felt. In the city I completed all four modules - each of them different scenarios spanning many maps, dungeons and puzzles to solve and they where all very well scripted. I really liked them.

Any of the four modules could be taken on in any order but there where recommended levels for each one. I took them in order. The second order was about the corruption of the westwood. An evil prescence had turned the once peaceful forest into a dangerous place. Now I had the chance to find the roots to this evil and restore the forest to its former state. I travelled to a remote village to help the mayor get rid of the evil that was about to surround the village totally. The setting was perfect. It was rather heavy on puzzles and I did not solve all of them but enough to complete it.

The last module was about to get rid of the pirates that blockade Durwich but also to stop an inquisition force of their witchhunt which had gone well over board. When the pirate threat finally was removed I could continue in my search for my brother by going to the Frontier Lands. 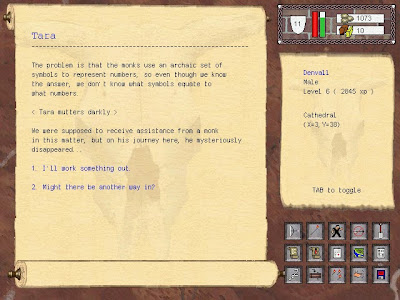 Unfortunately we never got there. The destination port was destroyed by invading huge creatures destroying the lands. It was like armageddon let loose. I had to go for a smaller fishing settlement instead and there my adventures continued. I had to retrieve old relics amongst the ruins now hold by orcs and I had to visit a port infested with dark shadows and rescue the few inhabitants still alive, hiding as they where in the sewers. All this and more eventually led me to the Enda people. A sage from them had visited me in a dream long ago and told that I had to look up the sage to be able to look for my brother and all that he had now awaken with his endeavours.

I was told that I had to look up another sage hidden deep down a long valley to get information about my brother. The valley was a maze but rather quickly I found a way to travel to another part of the valley that was inhabited by dinosaurs and a cannibal village. I found the sage´s village there but the sage had been captured by the cannibals so not only did I have to rescue him and do some smaller tasks for the friendly tribe but I also was given the task to blow up the whole cannibal camp. 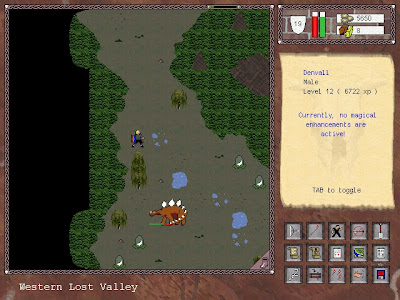 When I was finally able to talk with the sage about my lost brother he gave me a map and an orb and said I had to travel to a certain region. I entered the Giant´s Halls in search of my brother. The game is hard. At several places my progress are hindered, often by passages I cannot enter but which obviously could be opened one way or another. I had to turn to the walkthrough to figure out how to light up orbs that would open passageway for me and also at one place I had to eat a crazy mushroom I´ve found to see a hidden exit. Things which I would never figure out on my own.


Anyway, deep down I finally found my brother. Beside him was a lone meditating man that prayed for my brother so that he would still be himself. He and his friends had been searching for a long lost treausure and when touching it where slowly possessed by other entities. Now his friends had dispersed for other lands to destroy just for lust and himself was contained only because of the meditating man. The only chance to free them from their possession and save the land was to gather the soul essence from his friends and bring them back to his brother. I would have to kill them. Each of them seems to be living in different parts of the world which I believe is separated scenarios. 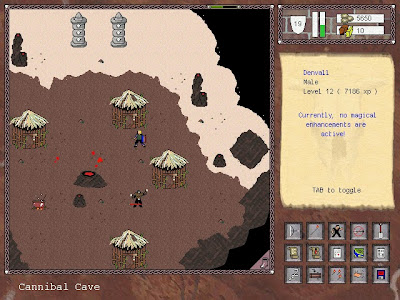 I headed for the Kintara region and embarked in a city with an architecture much like medieval japan. Now I have to find one of my brothers friend...

Regarding the combat system, I can now say that ranged weapons are overpowered. As long as you have enough stock of arrows/bolts you can take out any enemies from a distance and when they get close you could run away. Sooner or later you have outrunned them and can begin to shoot again. This makes combat in this sequel much easier than in the first. 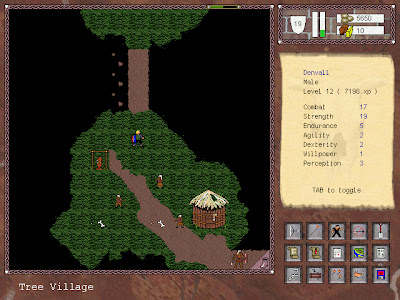 Arrows can only be bought in Durwhich and you have to have enough inventory space for them (the magic bag is a must). Certain enemies like shadows and other ghostlike creatures can only be hurt from special weapons which are hard to find. They cannot be shot at.

The challenge instead is to solve the puzzles or find specific items. The included walkthrough is very general for the later stages of the game and does not have solutions for all problems. Fortunately there is a built in items editor to be used in emergency if you want to summon an item you lack. I had to use it once since I couldn´t solve the chess puzzle below the cannibals village. I am pretty sure that puzzle would reveal stairs leading further down where I was hopint to find another vampire skull. I already had one and needed two since they seemed to be used like keys for some pillars. Instead of getting totally stuck in this game and leave it be, I had to cheat this item and be able to progress.

According to a fortune teller, I have completed around 25 % of the game right now even though I had played for over 20 hours and crossed dozens of maps and dungeons. This game really is huge and it is still as fun. I now know I prefer this bird-perspective instead of the classical Bard´s Tale view when playing. Or it might just be because there are no random encounters in this game...