Last time I decided to begin clearing out the barracks. I thought I already had done so but returned to the map part called Barracks once again. I didn´t know what to do except that there was one single dark hex that I hand´t stepped into yet. I know from my constant reloadings that this hex was empty but still I walked there just to make the whole map visible. Voila! That was the solution for clearing out the barracks. Pure coincidence I found that out.


Another quest was to find a hat for a pirate in the starting town. I returned back to the catacombs map to clear out the burial grounds. It was much easier this time when I was at level 5. I could quickfight every combat without problem. The Catacombs also houses enemies that for the most part drops magical runes. Not only did I find the hat but also resupplied myself with magical runes. Two bonuses at once. When returning the hat I got 1.000 gold. I wasn´t that impressed since I´ve already had over 14.000 gold at this time. I wonder if you get any XP for doing quests ? 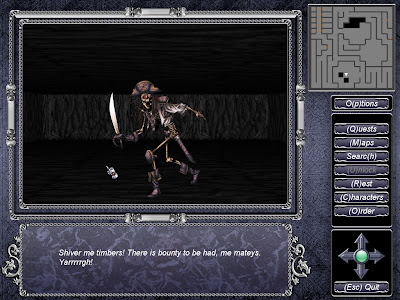 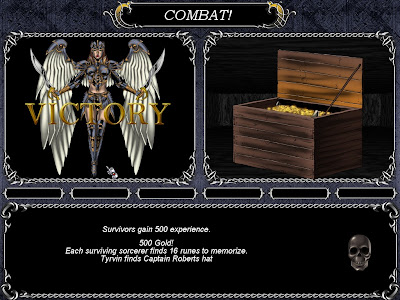 Even though fighting older and weaker enemies I was finally able to raise to level 6 with my knight, archer and rogue. My only lasting quest was to help the dwarf king with a rebellion. I prepared myself with full stock of magical runes before entering the rebellion square. The fight was not as hard as I first imagined thanks to my sorcerer that constantly blew away the enemy fighters from melee while the other one cast Electric Chain all the time. 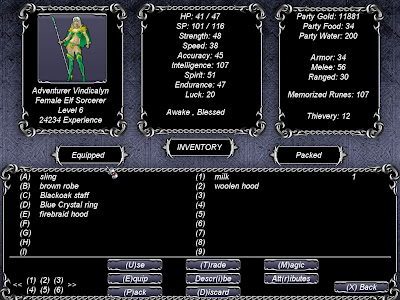 This quelling let me fulfill my quests for the dwarven king which was very satisfied. I returned to the alchemist with the good news. I had both won time by clearing out the barracks and also got the support from the dwarven king. Now the alchemist told me he was working on a very important potion to help combat my enemies. Now I understood that the real enemy is the demon Amahaaru and his minor ally in the catacombs are the necromancer called Sylstrilis. 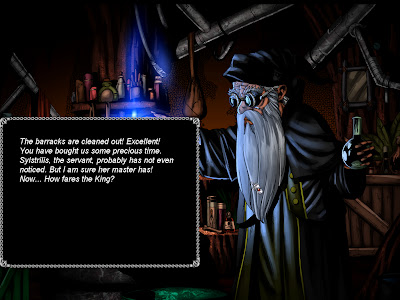 My new mission from the alchemist was to gather two ingredients. One that I could get from undead and one from deep water underground. I headed for the catacombs since I knew it contained hordes of undead and after a few random fights I found it. I then headed to the underwater lake which I guessed was the place I would get the last ingredient from.

That was easier said that done though. Even though I walked around the whole lake I never found it. I tried to rest several days on the same place without getting it. In my frustration I found out that there where two islands in the middle and I used the spell jump on them and eventually helped some elves kill some elder vampires hiding at another place. But even that didn´t get me the ingredient. It was then I had to check for the solution online and it turned out that a special fish has this item from time to time but in order to fight this fish I have to use levitate to go out on the actual water squares. I couldn´t figure that out by myself but after having fought the fish for at least four times it finally dropped my last ingredient. Now I headed back to the alchemist that gave me a potion I should use on a darkness spot to weaken the necromancer. I  had  found such a darkness spot before so I walked there and used the potion prior to entering. That gave me a very though fight with over 30+ enemies which I could by no means defeat and so I had to reload. 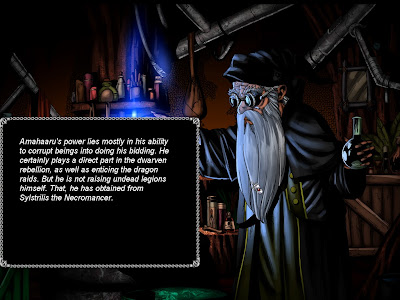 It was clear I have to return back here when I have become stronger. The only choice seemed to be to start grinding. It is not something I find much enjoyment it. I had to restock my magical runes and returned to the dwarf town. I spent one hour fighting different monsters and clearing out houses I hadn´t entered yet. Two bonues I got from this. The first was a few new magical weapons that was better than the ones I had and the other was combats with dragons that gave me scales. These scales could be used by the Dwarven king to give me dragon armour. 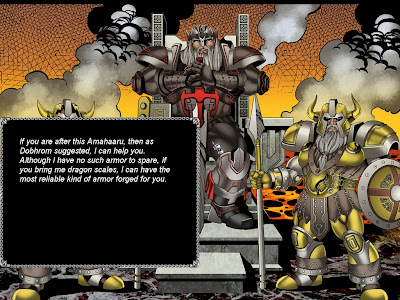 After about 1 hour I was up to level 8 with my melee fighters. The rest still needs a few thousand more XP but that will hopefully be taken care of in my next playing session.