Vampire: The Masquerade - Catches on!

I´ve continued to explore the world of Vampire: The Masquerade. Between the actionoriented RPG that this game truly is, the story unfolds slowly one piece at a time. I like that, even though it is a bit hard to grasp the overall scheme of things.

When I was running away from the nun Anezka last time, I was trapped in a dark Alley by Ecaterina, a female vampire that bit me in the neck. I awoke much later in a room in the University in Prague. Ecaterina told me that I was now taken under her clan Brujah wether I liked it or not. I was first allowed to feed blood on her just to prove that I was now also a vampire. I didn´t accept that at first, that I had lost my soul and turned into this....abomination. But I had little choice. Ecaterina told me that their enemies, the Tzimisce clan,  was looking for me to avenge my success in the silver mines and If I wanted to survive I must do as she say. 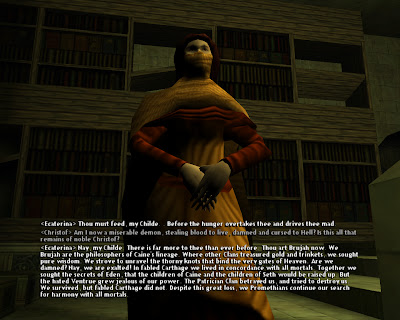 It turns out that there are several vampire clans and the Cappadocians has stolen a fragment of a book that I need to return to Ecaterina. I will accompany Wilhem - another vampire - and during this mission I will prove myself worthy of Ecaterina and her clan. I have no choice but to agree. 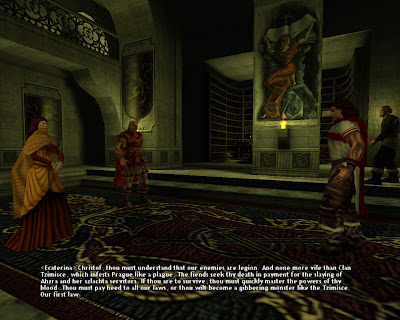 Now the game opens up to another mode. As a vampire I need blood to use special abilities called Disciplines. There are several schools of disciplines, each one containing specific skills. Each skill could be bought with experience points in up to five levels and becomes more and more powerful for each level but also gradually more expensive. Some skills are not available until you have bought all lesser ones first. The different Disciplines relies on different parts of your characters attribues like intelligence, perception or charm. All this is just another way of saying that your blood reserve is your mana points and the disciplines are like magical schools.

I can get more blood by feeding on citizens during the night (I will perish if I enter daylight) but only to a certain extent. If I feed too much I run the risk of killing them which decreases my humanity level. Also the guards in town will attack me if I am not careful when doing that. The lesser blood I have the more vulnerable I am to risk enter the frenzy state when my innate beast will take command of me and attack friend or foe.

Anyway, Wilhelm is just like another NPC added to my group. I can choose which person to control and he has his own character sheet and inventory. In combat he is controlled by the A.I and he can use his own disciplines in the fight. You could set his offensive stance from defensive to offensive but other than that you have to trust the A.I unless you control him directly. 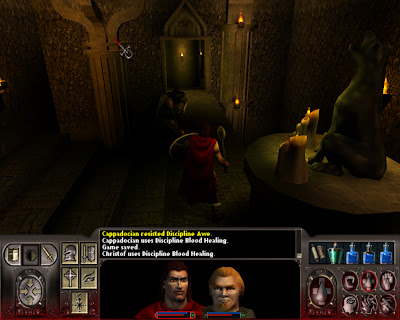 After three levels down at Pragues Monastery we found the book fragment after having to fight Mercurio, the one that stole the fragment. In this combat we died several times until I buffed up myself by using a skill in my Potence discipline (increases my attack damage).

As said before, the dungeon levels are very linear, seldom offering you more than one way ahead. Your path could be blocked by locked doors, gates or other obstacles but almost always it is visible levers nearby that manouver them. Sometimes there could be hard to see preassure plates or switches that must be found in order to continue. Most rooms are filled with enemies in different numbers and types. They can also use Disciplines if they belong to another Vampire clan. 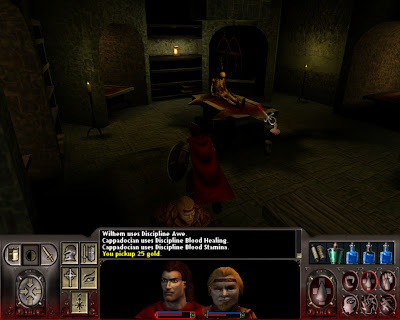 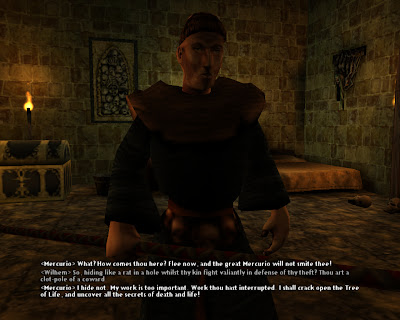 When we returned back to the University I was instructed that I had been assigned my own haven down in the basement. It is there I can "check in" to upgrade my skills and attributes. It could not be done during my travels so I either have to do it before or after a task or return here if it is possible in the middlw of a mission.

You are assigned experience points which you could use to increase your attributes or skill levels in already known Disciplines. New Disciplines could be awarded after missions and become available during level up. I like this system because each point will become more and more expensive and you have a lot of options to increase your abilities. You don´t have to use the any or all experience points if you don´t wan´t to. You could save them for later. I have done that a lot since it is too early to know which Disciplines will turn useful. Initially I spent most points on strengths and dexterity to increase my combat abilities. Melee weapons require a certain strength to be used.


I had dreams about the Nun Anezka. I cannot release her from my memory and it turns out she has fled the church and sacrificed her profession in order to find me. I don´t know where she is..... 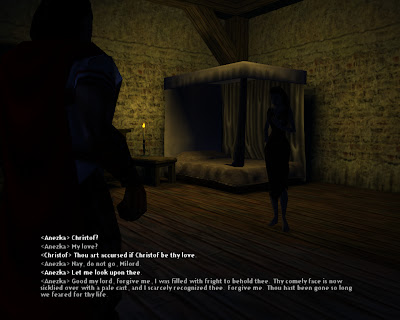 Meanwhile I was assigned to help Ecaterinas allies in the northern district of the town where they had trouble with a Golem. Me and Wilhelm entered the district and soon found the loose golem. It was a major fight and I died at least five times until I eventually managed to destroy it. When we returned to Ecaterina she was very satisfied.  She also mentions that Anezka was seeking me out at the university but Ecaterina didn´t reveal I was amongst them. I was very upset about this but for the time being I could do nothing except take the letter Anezka left and read it. 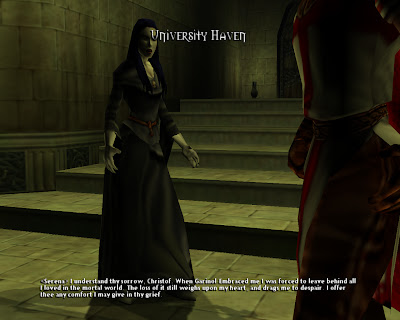 My next assignment was to help the prince in the town by going to the cemetary to enter the domains of the Nosferatu and kill their lord Vaclav. To aide me, Serene, a female vampire joined my group. She has skills in areas like reviving the dead and I thought that useful even tough she wasn´t strong or had any weapons or armours. I would have to buy some equipment to her and gave her a good dagger to fight with initially.


I fought in several levels against quite tough opposition. I had to use a lot of blood potions and disciplines and also lure away enemies one at a time in order to reach the undead Vaclav himself which we killed after a very tough fight. First I though our weapons couldn´t harm him but after a time I did notice a slight color change of his name. In combat the name of your opponent shows in the message list and the name goes more red the more injured the opponent is. 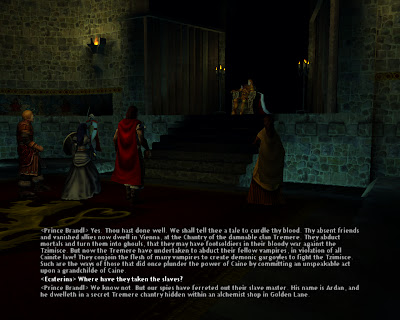 The two really good points about the game is the character building and the story. There is a shop in town where you could buy armours and weapons. You will sell off things you have gathered during your explorations and hope to afford the best weapons or armours available. The economy balance is good since I have not much gold but still enough to at least buy one good thing for my group one at a time.

Now I´ll have another assignment from the Prince to free some slaves below the Apothecary in the Golden Lane district....