I´m normally only writing about old RPGs here on this blog but since I am somewhat disconnected from those for the time being due to a modern RPG, I could just as well give my thoughts and comments about it rather than just leave it be.

I just completed Risen 2: Dark Waters. It was released in the spring of 2012 and is developed by Piranha Bytes, the same developer that was behind the Gothic series 2001 to 2006. 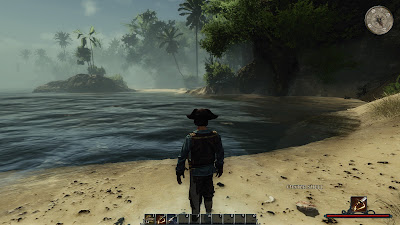 I liked the first Risen very much. It had good graphics, its performance vs hardware ratio was much improved over Gothic 3 and the setting was nice. Risen 2 builds on the same game mechanics but it is transferred to a world more like our carribean of the 17th century even though the gameworld is the same as in Risen. The story has almost no connections at all with the first installment and the skills and attribute system is totally reworked. This time you start out working for the inquisition - one of three factions in the game - and you are given orders to hunt down a pirate leader to get a powerful weapon in order to kill your real adversary, Mara and the Titan Lords. You will travel together with Patty, an NPC female whose father is the famous Steelbeard pirate captain. Together you will need  to gather four artifacts that will make up the weapon to defeat Mara. I won´t spoil more of the story here.

The gameworld consists of several islands that are made available to you as you progess in the plot. Each island is pretty large with a main mission divided into several sub-tasks and a lot of minor quests. Each has its own major NPC:s, skilltrainers, geography, monster fauna etc. At first you will not have any map available of the islands you visit and to get hold of it is one of your first priorities. As you find major locations you will be given the opportunity to fast travel between them on the island and you can at any time return to your ship and return to any other island.

You will have a need to return back and forth from previously visited islands partly because you will need skilltrainers and partly because merchants stocks differs at different islands. Equipment wise there seems to be quite much items at first glance. There are two sword types in the game like rapiers using the piercing skill and sables for slashing skills. There are different kind of them. The same goes for pistols, shotguns and muskets. For your own defense you could buy clothes from head to toe where the more expensive ones gives you bonuses. The only problem I had was that in the last third of the game when you finally have enough gold to buy something expensive, there are no really unique and expensive items to buy.

I really like the attribute, skill and talents system of the game. There are a lot of options to build you character. You could for example forge your own swords, firearms or create potions. I never did that but there are schematics lying around for it.

Having played CRPGs for the past 18 months I was struck by how easy and helpful todays RPGs had become. You have quest markers on the map and full dialogue history which makes it hard not to find what you are looking for or what to do next. Being used to hard, unforgiving CRPGS, I never spend my glory points until I felt I had to in order to achieve my objectives. So in the end I had 50.000 glory points unspent. I used most of them prior to my last fight but I am sure I wouldn´t have needed them.

On each map you could freely walk around large areas even though certain places forces you to either solve some quest or defeat a foe in order to progress. Each map could be looked upon as different episodes of the game. You could move around as you wish, talk to anyone you feel or just running around exploring. And here is my first objection. Exploration is seldom rewarding. Sure, you do find chests out in the wilderness, at the beaches or mountains, but they very often only contain mundane items, a few goldcoins or some valuables. Never anything that makes you say "Yes! I´ve found a special item".

One part of the game even allows you to find treasure maps and with them the red "X mark the spot" will appear in the game world. But even those hidden chests seldom contains anything really worthwhile. I suppose a half linear game like this cannot risk to disturb the game balance but I still feel it could have been improved a lot.

The roads are full of dangerous beasts but you will have to kill most of them because there are few ways around them. When you complete quests or killing beasts you are awarded glory points with which you could increase your base attribues. There are five of them: Blades, Firearms, Toughness, Cunning and Voodoo.

The first two are combat related attributes, toughness gives you protection abilities and cunning thievery abilities like stealth or lockpicking. Voodoo is just another name for magic. You start with level 1 in each of them but you could buy more points with aquired glory points which represents your experience points. The first point cost you 1.000 glory points and becomes gradually more expensive.

The graphical and story execution of the game is pretty and that is not to say the story in itself is anywhere near originality. My major problems with the game is the inmature dialogues. The game is clearly meant for teenagers. The dialogues either is very cliché or blending modern views into this time period which is just pathetic. Still there has been something with this game that has made me stay to the end. The feel when completing quests is top notch and you have the right feeling of constantly wanting to improve your character. You cannot be good at everything - which is good. Too bad the game is a bit too easy.

My advice is to not put too much into pick locks. I reached around 60 and that was enough and I never found anything really unique. However, without some skills put into this you will have harder economical problems. My other advice is to get the best musket as soon as possible. In the last third of the game it was my musket that killed 80% of my adversaries. The game feels a little unbalanced because I could shoot and run away, turn around, shoot, and run away again in almost every fight, including the boss fights. And you do this without getting any damage if you are quick enough with the keyboard. 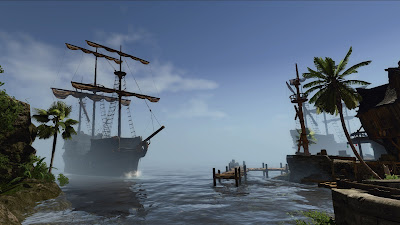 I did like the first Risen better. It felt more mature and harder but Risen 2 is well made and it feels bigger that the first installment. It is far from reaching the levels of Skyrim or Witcher 2 but I would say I had more fun with this one than with Drakensang - River of time or Gothic 4.

My mini review consists of plus and minus for Risen 2: