Serpent in the Staglands - Demo review

For some months now I have been following a game called Serpent in the Staglands that was released some months ago. It is a kickstarter backed CRPG with all its characteristics like poor VGA like resolution but also with all the things that makes CRPG great like no hand helding, no maps, exploration of blacked out areas and hard fights. I have been wondering if this game could be my next game but with a price tag at $20 I opted to test out the demo first and give you my impressions. 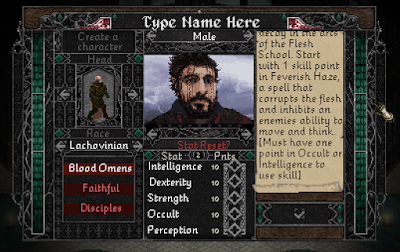 Before going into the character generation process (and yes this is a party based game), I had to answer a few questions. What effect these have is still held in darkness though because just when the game starts you will have to roll up your first character. The character is an avator of a god that has got stuck in the world. The portal to return seems to malfunction and the suspicions is that someone must be behind this. It is now your task to take on an avatar to enter the earthly world to find out the reasons behind this. As such you will be very fragile and vulnerable. 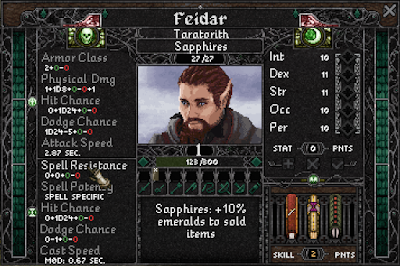 Fortunately I have my good friend Erlein who agrees to help me by giving me some starting coins and a disguise. From there on I am left alone to venture forth as I choose. I also have the choice to roll up other characters to help me out up to a total of five. I created one additional character Rennard beside my main person Feidar. There are several companions to be found in the world so I preffered to leave some space for them.

My friend Erlein already gave me names of two companions that I might recruit from him, a spellcaster type person and a more warrior like person. There are no classes in the game so you can develop your characters in any way you like by following three different skill trees (combat, magic and aptitudes).

There are six races to choose from, each with 3 special abilities. You can raise your attributes intelligence, strength, dexterity, occult and perception with two points as well as two points to spend on any skill. The skill are based on both your attributes and the skill level. You could increase the effects of a skill by upgrading it with additional skillpoints. So far so good....


Anyway, I was off with my two starting companions and begun by exploring the starting fortress which seems to be set somewhere in the wilderness. It was filled with libraries and acolytes. I found a few items in wardrobes and chests which gave me some food (to increase health), rope and some kitchen daggers to use as weapons. I then recruited the two members that Erlein had suggested. At one point I got to the storekeeper and was able to buy some equipment with the few emeralds Erlain gave to mee. I still lacked all sorts of armours or better weapons.

When I was done exploring the fort, I met Erlein in the courtyard who said he himself would set out to investigate the matter on his own. He said he would contact me if he found out anything. With no overland map and no directions I started to explore the immediate surroundings outside of the fortress.

A bit south, across a bridge I came into my first combat with foxes. I just selected all of my companions (four) and attacked one at a time and managed to kill three of them. I then explored all areas I could access and met wolves and goblins and I died several times in fighting them. But eventually I killed them by using my mage more efficiently and by finding better items. Things got easier when I found out how to heal myself which is only possible by a spell as far as I have found out. Unless you would like to buy healing potions which are too expensive for me right now. It doesn´t seem that there are any mana or spellpoints so I can cast how many spells I want. The only drawback might me the time it takes to cast them and that they all vanish if you move or attack. A new way to handle this nevertheless.


Most foes leave some equipment like food behind or weapons and armours. The game mechanics seems rather complex at first but by rightclicking you will see what formula makes up your values. You get experience points for killing and to reach the first level you need 300. I have yet to level up because it seems the demo is very small. I could not cross further past the bridge to the south or west. In the east I found a cabin guarded by bandits which where pretty hard to take out but after luring them away one by one I could finish them off and was rewarded with some good items and also a trapdoor that lead down to a cave. Unfortunately I could not progress far because it felt like the demo stopped me.

I found two places of interest in the area neither of which I could find out what to do:

I didn´t get much farther sine the demo restricted me which is a pity. It should have been at least twice as big. I still don´t have had any use for any skill or tried out how to develop my characters.

I had some fun exploring the game. It has received pretty good reviews but seems to have been buggy at release. The good thing is that the developers seems to work hard on releasing patches and several has arrived since after the release.

At the current price tag the game feels a little expensive compared to other games like Lords of Xulima. The resolution is terrible but playable. The UI works but is a little quirky. You have to carefully click and point exactly on the right spot in this pixelated world to get anything to happen. It is sometimes hard to see what things symbolise, especially in your inventory. That would be ok for a game released in 1990 but I don´t understand why the developers choose to stuck at the lowest resolution possible. Apart from that I did have fun and since I´ve just got started I might well buy this before I find it on sale. It seems to have potential.

[Update 12 hours later: I have now bought the game so expect more entries to come...]

Serpent in the Staglands features:

Email ThisBlogThis!Share to TwitterShare to FacebookShare to Pinterest
Etiketter: crpg, indie, Serpent in the Staglands