I left the capital Stormhaven in an attempt to search for a mean to translate the book of prophecies I had found. My only clue was that an oracle might know how to translate it and that I should search for the oracle in the desert and ask about it in the town of Naedarn.

I had no idea where the desert might since I haven´t any worldmap of the game but I decided to go west from the capital and follow the coastline. There I found a bandit cave in the mountains that I cleared before moving on.

The overland map is quite nicely drawn and I found smaller towns along my way before coming to a huge marsh. At a certain spot in the marsh I was attacked by a huge monster which I had no means of defeating at this stage so I reloaded and passed this place, trying to memorise the location. My exploration took time and time means money to pay for the upkeep of the mage and fighter in my group. I think the ask for at least 500 gold per week and my starting gold when leaving the capital was around 3.000 gold. 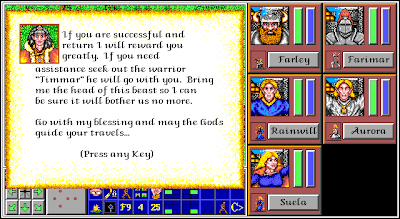 After some exploration I came to a small village in which I met a woman that said she had dreamt of my coming. The village was in dire need of help. The village had been attacked by evil creatures led by some sort of intelligence directing the attacks. Only if the source was destroyed the woman believed it would be possible for the village to manage on their own and fend off the lesser evils. They had located the creatures lair to the mountains in the north and also said that they would be willing to send their warrior Timmar to assist me.

I offered our help and looked for Timmar. When I found him I accepted him without being able to look at his character sheet. He turned out to be a strong warrior at level 10, fully equipped with his own inventory. However, I did not intend to undertake this mission just yet. I preferred to look up the book of prophecies instead. I took Timmar with me and continued my exploration.

I eventually reached the boundaries to how far west I could go and begun to travel south. There I came across the small village Naedarn in which I rested before exploring the nearby mountains. There was nothing in the city itself that helped me in my quest for the oracle - or anything other for that matter.

In the near mountains just southeast of the village I found an entrance leading me to a three level underground complex filled with undead. For the first time my priest was in the center and he used the spell Exorcism  with success against the undead. The spell affects all creatures and more heavily the weaker they are.

I didn´t know what I was here for except for plundering this place. I found a lot of good items, amongst them a bow of truth which gave +3 shots and +25 in perception and + 25 in detect traps. Quite handy to be carried around by one of my front fighters. It also inflicts 15-25 damage compared with an elven longbow that "only" inflicts 8-14, so it is a very heavy upgrade in my ranged capability.

I have found that chests generally have random equipment and if you are lucky you could get some magical rings from them. Otherwise they often contains scrolls, potions or valuable stones except for mundane weapons and armours. The latter part has already become quite obsolete for me unless I find a ++ item. That gives either improved chances in your weapon skill or armour bonus.


Anyway, after a few hours and several trips back to the closest town for resting, I cleared the dungeon. It was just a distraction but gave me valuable experience points and new good equipment. I begun to explore the area just south of there which led me to the desert. To make a long story short this is what happened: 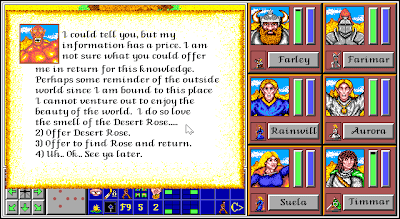 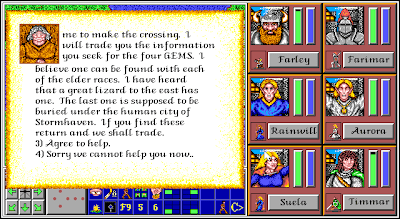 So now I had some huge quests ahead of me which will take a lot of time to complete. I still don´t know how the book of prophecies is tied to my mission but I am sure I will find out eventually. I returned back to the regions around the capital Stormhaven and increased my levels to 6 or 7. Timmar was a pretty good fighter addition to my group (even though he seems to be a ranger) so I have no need to switch him right now.

The training gets more and more expensive the higher levels you attain so I spent a few thousand gold to raise levels but fortunately I could afford it. My pool of gold is over 10.000 right now so I will be able to pay for the wages without problems. I now returned back to the northwest in which I picked up Timmar. Now it was time to help the village fend off the evil creatures and try to gain my first gem of power.

The cave lied in the mountains just north of the village and spans at least 6 different screens. I have tried to clear this place at three separate times. I can manage around three combats before I feel I have to return to rest and regain my spell points and hitpoints. 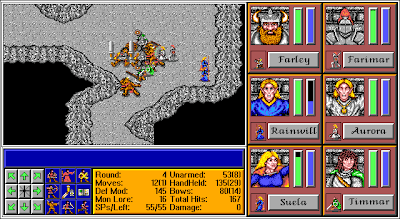 I must admit I am getting quite tired of the combat in the game. It is quite repetitive and the tactical maps are almost the same in the caves all the time. So far my only tactics is to retreat with the two mages and let them cast the group haste spell. If the battle is a tougher one I also cast Tower of Might on my warriors or fling away some mage bolts or pyrotechnics although I don´t think they are any good.


I am not sure if I will continue to play this game to the bitter end or not. I could barely put one hour a day into it so it will take quite some time before I will make major progress. This point exists in all games I play. When the excitement of everything new about the game has settled and you stop being surprised by the game you find that you must have the patience to keep going.

Meanwhile, I am waiting for patch 6 to Rome 2 Total War. I have told myself to buy the game after that patch since I loved Rome 1 but it is sad that Rome 2 was so incomplete when it was released. Anyway, that is another chapter and we´ll see what happens. Either the review comes up next or I continue with the game.
Upplagd av Saintus kl. 8:04 AM