The background story in this game goes something like this. There was a huge fight between Order and Chaos and the land Farr was severely punished in the fight. The evil seems to be on the winning side. Three steads return  to another dimension to get help from the three brothers to clear up this mess. They arrive and take the brothers with them but when landing in the square of the town Padavis the steads gets stoned by the evil lord and turns to a statue. Now it is up to the brothers to try to help this broken land.

That´s about it. I have no idea of what I should do or where I should go. I like the freedom of moving around but after my 8 hours or so put into the game when writing this I would like to have a hint of where to go or what to do. Well, I suppose I will have to keep playing to find out.

My wandering around the areas east of the starting town Padavis continued. Several times I was attacked by goblins. They helped build up my characters and occasionally gave me some better equipment or gold. For example, they helped me greatly in getting the first line of armours like hide shields or soft leather gauntlets. They also gave us our first longswords in bronze but that metal is inferior to potmetal. But how do I know which is better between a bronze longsword or a potmetal shortsword ? You never see the damage dealt to enemies so this is hard to judge.

Most of the seven skills in the game increase during combat. Most common is that you vitality increases, followed by swordcraft (if you use swords),brawn (strength), agility (ability to dodge) and shield. That happens quite frequently and you really notice the difference in fights with the same monster types after awhile. I think that system works pretty ok but you have to make sure all brothers participate in combat or magic or else the first brother Julian, will be much stronger than the other two.

After having following the eastern path for quite some time we stumbled upon Castle Jovanc. It was huge on the outside and curious as I am we entered. The entrance hall hid a skeleton that lunged forward to stop our progress. He was quite tough but we managed to kill him. The adjoining rooms gave us some potions but the main entrance door where full of skeletons behind and after having tried once and been killed quickly, I reloaded. Instead I continued east, past the castle.


My plan was to follow the outlines of the coast to have something to navigate by. Since the automap shows unexploread areas as massive black, I have to explore each part of the map throughly in order not to miss anything. I met some sea snakes and later on Hobgoblins that where all too difficult to defeat. I had to return to the town to make out a new plan.

So far I keep all brothers tight to my active character (banded) and all set to agressive when combat is about to begin. But I have seen the benefit of letting a brother flee - if he is very low on hit points - or not to attack with him in the first place.


Combat in the game is turnbased. That´s why the triangular square shows atop the leader to indicate he needs another target or cannot reach his target. But by holding the left mouse button down on the enemy my active character will attack it as long and fast as it is able. The computer controls the other ones at the same time and they will attack the nearest target.


Combat works when you get the grips of it but it could be hard to have a good overview of all the brothers at once. Everytime you shift brother or do something with the inventory some time passes for the enemy to move. If anyone is outside the screen you cannot scroll the screen in anyway the only solution is to shift to that character. That is a cumbersome interface used.


Anyway, after having tried to sell some stuff in Padavis we headed south and after much exploring came upon a goblin village. There where a lot of goblins guarding it *surprise, surprise!*. I think we killed at least a dozen before we came upon the entrance.


The goblin village contained an underground level which we explored. I got some new weapon upgrades like steel Greatswords and a lot of healing potions. This village turned out to give us a lot of more skill increases and I felt we where much stronger when we returned back to town. 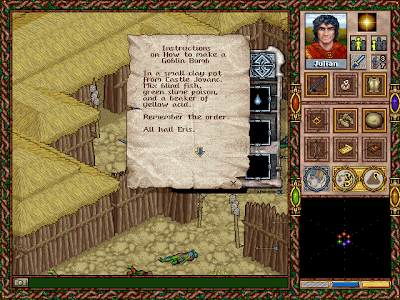 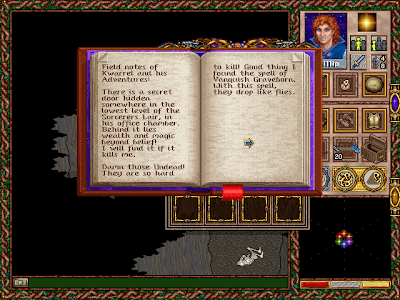 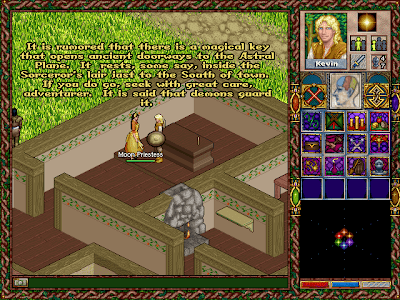 After the goblin raid I thought the better armour and weapons we now got could be enough to take on the castle again. I went back and we forced ourselves into the castle, slaying ordinary skeletons without much problems but the skeleton warriors was much tougher. I often had to use tactics like opening a door and fight in the door frame and when being badly hurt, close the door and heal up and try again. That didn´t work everywhere though but enough for us to clear most of the ground level and the upstair level. We found a lot of potions and other stuff. There is quite many ordinary items in the game you could take but I am not sure if everything has a meaning. 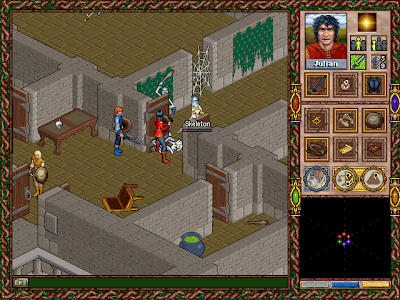 There where a little ghost boy running around in the castle. He didn´t attack me but did not speak to me either. I found a toy which I gave to him and he gave me a staff of life as a gift. It was hard and took me quite some time to clear most of the castle. My last action in the castle was to kill some sort of undead leader. He left the sword Cauldera which I gave to Julian and it does tremendous of damage compared to my previous weapons. 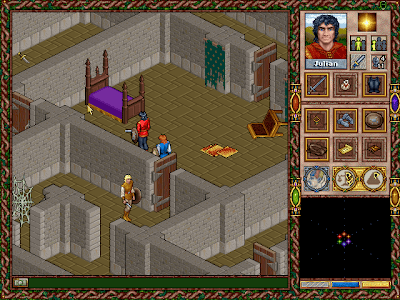 I left the castle and continued eastward. I fought countless of small random encounters. I eventually decided to begin to turn back. It was then I found a road and I thought that I perhaps should follow the road for the first time and so I did. It just ended after a while but it turned out there was a cave close to it. Yes! My first cave! We eagerly entered.

This complex consisted of several dungeon floors filled with dwarves, spiders and later on in the depths by giants and flying small dragon hatchlets. I did manage to fight them all and it gave me valuable increases in all my skills as well as vitality (my hitpoints). We found huge amounts of gold on the dwarves corpses, getting our pooled gold to several thousand coins. 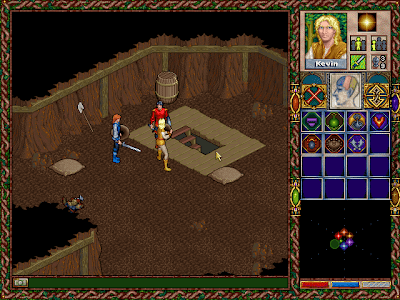 I was delighted to find some dragonskin boots for all of my three brothers and much better weapons and armours as well. In the end I also found some rare spell scrolls. I have elected Kevin to be my spellcaster in the group so all new spells goes to him. He is my healer and since I have been using healing quite a lot his spellcraft skill has increased, giving me even more spellpoints.

After returning from the cave I felt rich and I felt very strong with my group. We had much better armour and weapons and where stronger in general. It was time to retreat back to town to sell of some jewellery and plan our next move.
It was then I found our next cave. It was much smaller and inhabited by goblins but they where easily disposed of. I found an offensive spell and much food in the cave but other than that, nothing. When leaving the cave we stumbled upon a peddlar which I traded some items with. Amongst other things I sold him my found gemstones and got several thousand gold in return.

When coming back to town I immediately headed for the coaches. I wanted to travel somewhere else and begin my adventure or find clues about it. I choosed a town lying straight north of me. I hope I will find some menaing with our existence in these lands there.
Upplagd av Saintus kl. 9:28 PM