Legend of Faerghail - The Temple

Before leaving for the Dragon temple that are located south of the town I had to return to the town to sell off stuff at the emporium and see which persons where eligible for training. Training gets more and more expensive for each level. The amount of gold you could carry in your party is limited by the weight and I had to deposit some in the bank to release space more space.

We then headed of for the temple. It is inhabited by a lot of lizardlike humanoids. From lizard warriors, to lizard priests and high-priests as well as ordinary priests. Add to that wandering random creatures and you notice it has its own fauna.

The first level is 32x32 hexes large and features a great hall, several rooms for accomodation of monks, priests, guards and the high priests. In many of the high-priests rooms where valuable treasures both in gold and items such as the large shield+ (better than a standard shield) and long arrows+2.

Early on I met a small creature willing to giving me a secret for 150 gold, stating that "You can avoid one of the guards by using the secret door in the south". With that in mind I headed on to first explore the great hall and then the irregular sections of the west and right wing. There where not much of interests in there except for an unknown potion.

In the south of the great hall where a portal that we went through that led to the inner section of the temple. 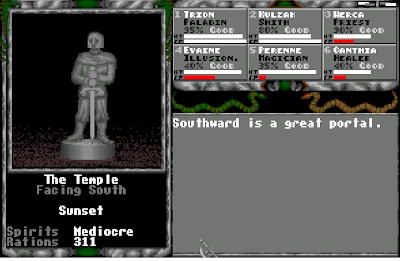 I avoided most of the fights and especially against magic users that are far more dangerous than what their XP yields. Instead I picked fights when I thought they where harassing me or I met some more eligible targets like mercenaries or bandits. Below you could see the ghostly white shapes that represents a group of creatures moving about two hexes in front of you.

The south part of the map is where the riches lied. A lot of rooms for high priests and secret doors concealed riches both in gold and armours. There where at least half a dozen secret doors or more here. They are not hard to discover unless you pass them from a distance.

I stumbled upon a new portal to the far south that I could not pass. I don´t know if it´s just there for the display or actually could be used in any way. I also found the official great altar I don´t think there is anything I am supposed to do there. In the southeastern part of the level I found stairs leading down to level #2.

This level turned out to be far more interesting and dangerous.


Behind it was a corridor that ultimately reveald a Staff of light and a Catchpoles hilt. The latter could only be used by a thief. I gave the staff to my magician Perenne. The room with those two items could be reached from the another way as well but if you come from the northern direction you will face a salamander asking you to solve his riddle in order to pass:

In this particular case the riddle is not very important since you could get around it from another way. 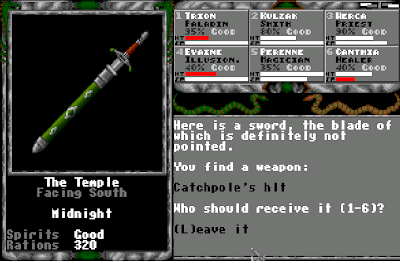 The only other valuable item on this level is a striking staff that I gave to my Illusionist Evaine. I have no idea what is better between a fighting staff, staff of light or shaolinstaff. 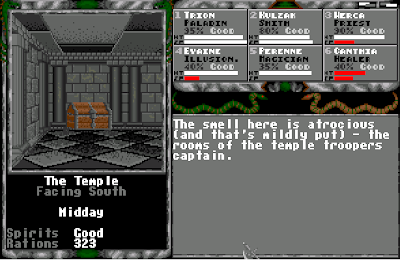 We found one important pergament that told about 10 very powerful items among the the Inquisitors blade, the hammer of the gods and the shaolin staff. I will keep a lookout of the other ones during my adventures.

When I got the Catchpoles Hilt I was eager to return to the town to swap out my priest again for my level 2 thief. I did so and returned to the Temple in hope of gaining more XP for the thief. After 10 combats he had not hit a single time with the Catchpole or managed to stalk. Needless to say I now dumped him forever.

After having explored the whole second level and ascertained there are no more levels, we returned back to town to sell off stuff and try to train. Unfortunately we had not gathered that much XP and only one or two of us was ready to train. My paladin Trion is now at level 5 while my illusionist is still at level 3. Despite this we maked ready for our next task which was to explore the elven pyramid in the north.

You might have seen the party has something called spirit in the lower left corner. The more injured you are and the less food you have the more your morale degrades which affects you ability to fight. As long as you rest when you are weak and have enough food this will never be a problem and it is nothing I keep my eyes on too much.

Now we have to leave for the elven pyramids....