Last night I finally won the game. It was a race of time and of my patience. I had come to the stage where my patience dwindled and I just wanted to get the game over with.

Last time I had just returned from the castle and bought the Vistrani potion that was said to make me able to traverse the fog surrounding the land and make my possible escape from this damned place. I had no other leads than to return to the first area I came to in the beginning and enter the fog.

Right before entering I drank the potion and it was split among my group. I then saved the game and entered the fog. I came out on the other side and was immediately surrounded with moving, agressive trees that feriously attacked me from every side. I had to run from them to get my orientations right. When checking my automap I found out I had come to a totally new place called the undead woods. After running around for awhile I found a few seeds on the ground which seemed important and connected to the last ritual I had read from Sascha in the old church. The attacks from the trees quickly forced me out from this area though and I had to flee back to the village and rest the group and prepare for a fight against them but also to completely search this new area.

When returning I took the fight with the trees and unleashed up to ten magical missiles, six fireballs and four ice storms. Even tough I killed 6 or 7 trees the place was full of them and I had to repeat my run-and-rest-procedure until I had found every item of interest in the wood. Still the trees would never be entirely wiped out so I gave up on those. Instead I found a teleporter in the east part that took me to another part of the forest. Here I fought both trees and found more seeds in the ground but also a stone circle with a tree inside. Besided the tree where four piles of stones. One for each of the seeds I had found. I had to run away to rest and then reenter this place, carefully saving at strategic positions along the way. I knew I would be assulted by all trees while planting my seeds but I had no choice. I ran to the stone circle and begun to plant the seeds in the middle of the stone circles. Meanwhile the trees could sneak into the circle and attack me but I killed a few and was drained of all my spells but not before completing the ritual. 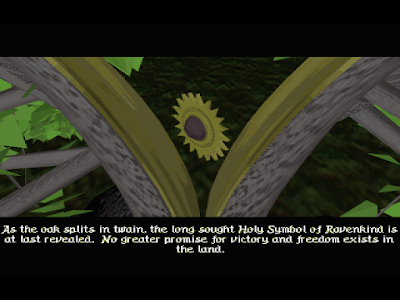 The tree lightened up and revealed the holy symbol of Ravenkind: My weapon to destroy Strahd. I run as quickly as possible from this very difficult area back to the village to rest and then headed for the castle. This was my final visit. 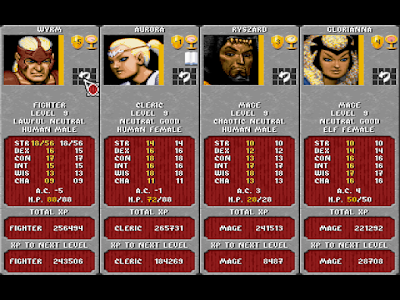 This time I had to get up a few stairs in front of a lock I had never opened before. But by using my bat key I opened it and was led to the dungeons. Now started my search for Strahd. I explored every room, opened every door and fought every undead. Except for the ridiculous hard level draining monsters which names I have forgotten. I make myself invisible and try to run past them instead. At this stage in the game I followed the cluebook to know where to run to press two hidden buttons to open a locked door. Everywhere there where powerful leveldraining undead which was impossible to defeat for me so I just ran and ran. After a few tries I managed to enter the final crypt. Now it was between me and the evil vampire lord Strahd.

I equipped myself with the Ravenkind before I finally found Strahd. As all evil denizens in roleplaying games he mocks me before he intends to kill me. He then attacks by hurling fireballs and disappears and reappears. I was killed the first two times when I fought him with conventional weapons and magic without any effect. Then I used only the Ravenkind which bursted out a fire beam. After only three hits Strahd died on the floor and I could take the final amulet that was stolen in the beginning of the game.

But what was I suppose to do now ? Well. Impatient as I was to complete the game now I looked through the cluebook and the only thing I was to do was to read a book I had found that depended on a few special items I had found. Amongst then a feather and an elven crown. After reading the book the ending sequence started. 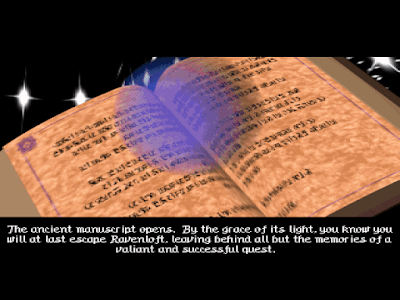 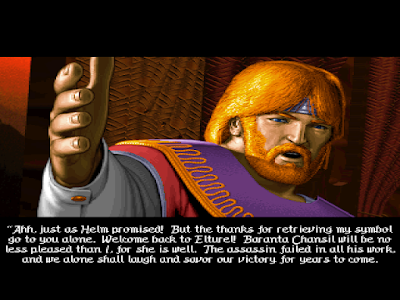 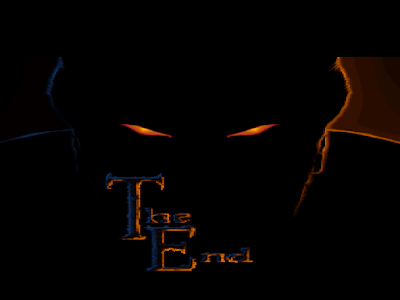 The end was a joy until a mist flowed down to a chest and a terrible laughter was heard. I finally made it but will there be a natural connection in the sequel Stone Prophet or will it it not ? I don´t know but I will find out in the future. Right now I need a pause from this type of game and my next post will hold my review.