I continued my quest in them game Strahd´s Possession. I found the village Bovaria. It turned out to be quite large with many, many houses to search. I thought I could just do them systematically but the awkward interface and the terrible graphics in fullscreen mode made it easy to miss exploring some building. Therefore I used the automap which is fully acceptable and you can also make notes on it. I put a X-sign on every house explored and marked places of certain interests. 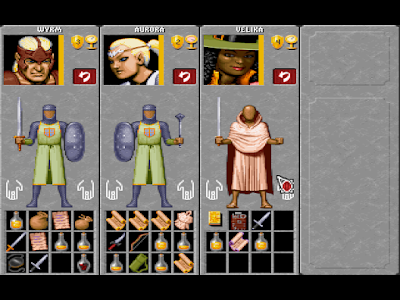 There are day/night cycles in the game and especially at night the streets are more dangerous. I was attacked by several brigands/thieves which I had to fight off. Fortunately you could rest quite liberally except when in immediate danger. I must tell you that the combat system is really awkward. It plays out in realtime but the steering is terrible which makes it hard to turn around to face the enemies when they also tries to circle you. The combat is a click fest. At least you get information if you miss or hit and what damage you inflict or receive but other than that it is slow and cumbersome. Enemies don´t reveal their health status so you have no idea which in a group have already injured. Also, my figher turns out to be the worst member of the group. He hardly hit but receives most of the damage. The only way effective way to fight is to use my mages magic missiles and my priests flame blade. Since you also don´t get any loot or any visible experience points (I am sure I get it. I would just like to see it like a reward) fightning feels quite unneccessary. It is just a hinder. Enemies seems to wander around by random until they see you and then swarm you. We are all starting on level 6 so any immediate level ups are also not on the table at this stage.

Ok, apart from the boring fights, what happened in the town ? 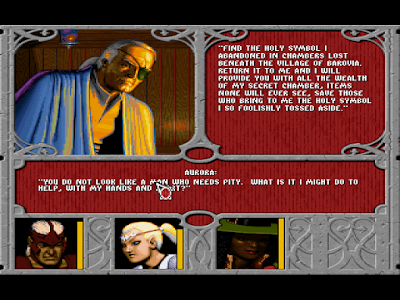 I did all of this and it was quite interesting. The underground catacombs was pretty large filled with fireball traps, living walls and its evil denizens. I could only fight them with magic because my melee weapons did only 1 or 2 points of damage. I had to rest and rememorize my spells a lot down here. Eventually I found two important keys that unlocked some doors. Behind this I found the amulet. I was very lucky because one of the keys was hidden in a room only accessible through an illusionary wall which I just stumbled into. They are very hard to spot with this bad graphics at the fullscreen resolution. It took me 1,5 hour to go through this catacomb. 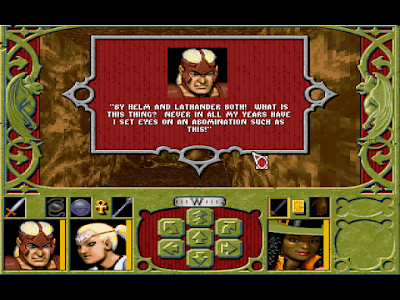 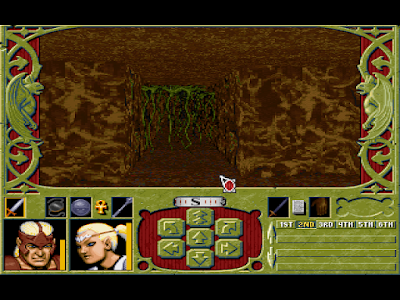 When I returned to the Paladin he opened a room with my reward. A Paladins sword and some armour. None of them was any better than my starting equipment so I got very dissappointed. I don´t know if they have some special properties or are magical which I cannot detect but the descriptions of their damage or or my armour class was not affected at all.

What lies ahead of me is to explore the rest of the houses. It would take a few hours because I have only begun to explore a few of them. I have decided to take help from an online site with the town already mapped out just to save some time.

Right now I struggle with giving up this game because I don´t feel any progression with my characters, weapons or anything and the interface is really terrible. It is slow and clumsy. To use a potion or an item I have to go to the inventory, select the item put it in my hand and then return to the main screen and press the hand. Still, the free roaming movement in the 3D-world is slow by using the numeric keypad on my keyboard.

The music is very simple but it tries to be atmospheric. I found the music in Ultima Underworld much better. The game's strongest part is the interactions with NPC:s and that your partymembers actually comment things they see from time to time. That is a very good thing and not very common. It reminds me of Realms of Arkania and games like Blade of Destiny and Shadows over Riva. This is probably Strahd´s possessions strongest part right now. 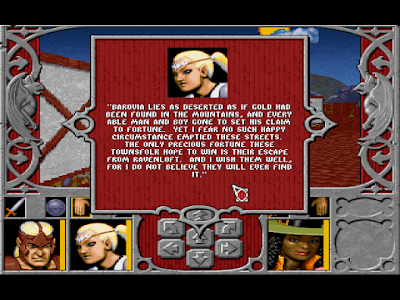 I probably did a mistake by visiting the jeweller in the village. I had already been warned in a comment of my first post but never understood that it was this encounter until it was too late. The jeweller was an undead that demanded that I would slain his murderer who stole things from him a long time ago. This murderer could be found in the cemetary and is now some sort of undead lord. Until I have fulfilled my promise my soul are now possessed by the jeweler. I didn´t acutally find out until an hour or two later when I checked the status of my paladin. He was possessed it said. But I never understood what it meant......Until just some moments later when the ghost of the jeweller haunted me impatiently and said the undead lord still lives and he demanded me to go there or he would squeeze the life out of me. It was then I understood I had some sort of time limit before my Paladin would be lost.


I had to google this part up and it was obvious this is one the worst things you could do early on in the game. It is way too hard to fulfill that quest at this stage so my paladin is lost. I thought about quitting the game right here but decided to do one more try by reloading an old save and avoid this jeweller for now. I am glad I did because the game started to grow on me afterwards.

My next exploration in the village was the mansion and the village mayor. He was obviously a puppet for Strahd himself (the ruler of this land) and told me that Strahd had invited me and gave me an introduction letter. In the room he already had an elven guest and after we had spoke for awhile I recruited her to my group. It turned out she was a mage as well. I have no clue wether experience points is divided between the parytmembers or not so until that is confirmed, the more the better.

After I had explored the mansion and picked up some scrolls in the library I was ready to accept the invitation to visit Strahd Zarovich. Now a cutscene took over showing the carriage taking me to Strahds castle. This is a nice touch in the game and all texts are spoken as well which adds much to the atmosphere. 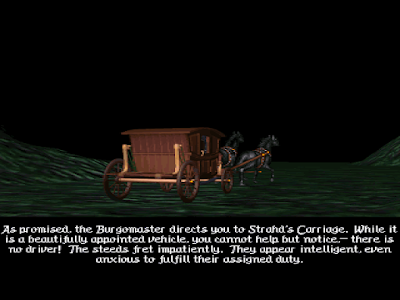 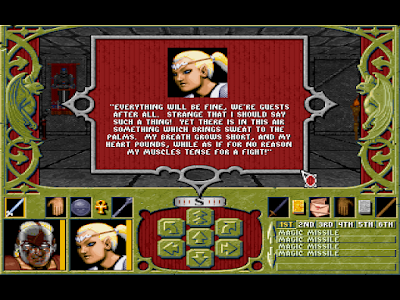 Suddenly I was inside the gates at the castle. I could not explore it since guards where everwhere. The only way forward was to the dining hall where I med Strahd Zarovich for the first time. He was polite and told me in no uncertain terms that there is no way to leave these lands. However there was rumoured to exists some teleporters which he wanted me to investigate in the caves west of Barovia village and since he hadn´t the time himself and trusted us he gave us a key to enter those. 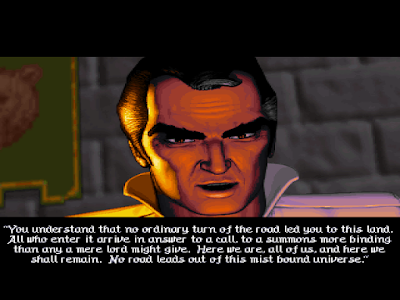 Then he invited us to a splendid dinner with the best wine of the country before letting the driverless carriage return us to the village. And here I was again. At least with a clear goal again. Now things started to get more interesting and I decided to head for the caves so we left the village through the western gate and entered a wilderness. We where immediately attacked by skeleton bats but this time I found that the easiest thing to fight anything in the game is to just clicking on them and all available weapons will attack in their order of readiness. Now the combats actually was managable and I could get rid of dozens of skeleton bats withouth much trouble.


The only interesting place in the wilderness was a house with a mage that had made it to his permanent residence. He was interested in joining us but since I already had my party at full strength I declined. Instead I found the entrance to the caves to the west but also a new NPC woman who was also in search of those caverns. She could also join us but I refused this time as well and decided to enter the caves with the key Strahd had given us. 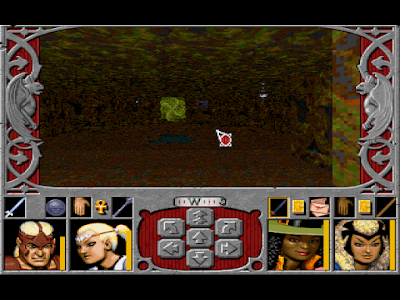 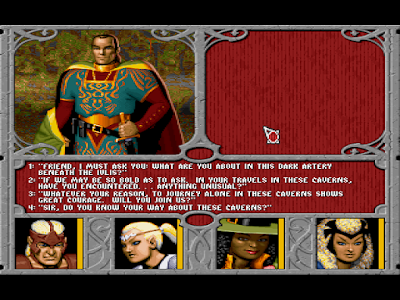 This underground cavern turned out to be huge and hard to navigate. Not only because it was filled will teleporters and disorienting squares but it was also filled of skeletons. Those where, however, easily disposed of but before I entered the main area yet another NPC showed up. A strong warrior who I decided to replace my first multiclass fighter/thief/mage aquaintance. If not only because I now didn´t have as much strugge in combat as before when I had to rely almost solely on magic. He was a fighter at level 7 and quite competent so he is with me for the time being.

I have to say that I end this post with a better understanding and a more positive view of the game than after my last post. Combat is more managable now and the story have developed. I also love the cutscenes and the dialogues with the NPC:s and from the group members. Those texts are really well written, like reading a fantasy book.

This cave however is hard to navigate and all teleporters are not activated or functional while othere require keys. I haven´t found a single key yet and I have searched everywhere. My worst nightmare is if there are illusionary walls here because frankly, in a free roaming, slow moving game like this it would take ages to search the walls and that is just too boring and tedious with the little time I have to spare. I might look up a map of this place to help me out if I don´t find anything soon.

I would imagine that at the time in 1994 this game would be a really good RPG. Too bad the graphics is not coming to its best to be played in fullscreen. I sometimes play it in a very small window just to try to understand what I actually see on the screen.

I was very near to quit this game when I found out about the irreversible possession you get from the jeweller ghost. I had no motivation to reload an old save game. I even let my possessed character be killed in order to use a scroll of raise dead to see if I could get rid of the possession but with no success. Anyway, I am glad I did give it another chance so I could progress a little more in the story. Let´s see if the labyrinths and dungeons of the game will be the irritating part that will destory my progress.....