Arx Fatalis - Almost made it

I have continued to play Arx Fatalis although I have had doubts about it.

When I reached the secret temple and found the meteorite, I had to fight a demonlike spawn of hell in that very last moment. But I also freed a captured woman that was about to be sacrificed to the evil. It was that woman I stumbled upon later on in my travels through the caverns. After a short introduction she hit me in my head and I fell unconscious. When I awoke I had been taken to the rebels hideout. I soon found out that she was the rebels leader.

The rebels had one of the two items in their possession but was only willing to depart of it if I could give them something else of great value. We struck a deal. I promised I would bring them a magical shield in return for the item. I was then released and this Rebel camp worked like a small city. There was a blacksmith there that could repair my equipment and his shop also contained some powerful items that I had the amibiton to aquire by collecting gold.

So I left the Rebels camp and explored through the caverns filled with orcs and ogres and finally reached the serpents world. They was also in possession of the other important item but the only way for me to get hold of it was to go through "Test of illusion". It was made up of several rooms with lesser and major puzzles to be solved in each one of them until I at the end got hold of the item. I have to admit I had to cheat at some point or I would have got stuck. 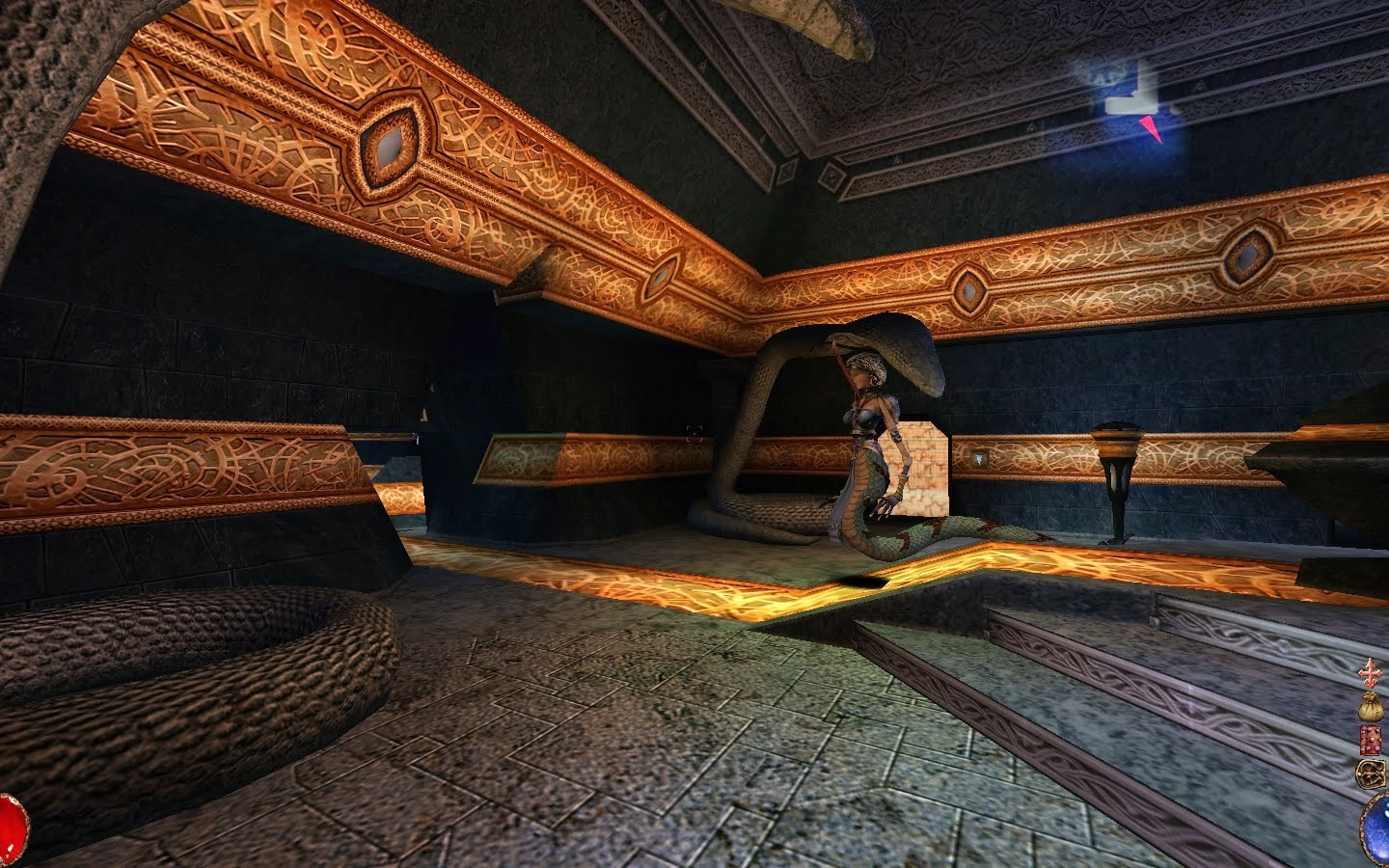 The problems could be from pulling levers in a specific order to use a scroll of reveal to show me the real lever amongst many faked ones and finally to have me go straight through a wall since it was an illusion. That kind of things that could get you stuck for hours without solving it.

Anyway, I finally got hold of one of the important items here. I then continued to explore the caverns. The game consists of many levels and they are connected by stairs or paths leading up and down. There could be several exits on each level and each level is divided into parts that are not always accessible from each other. This means there is a lot of running around to find the right paths. Fortunately I finally found several teleporters of the ones I wrote about in my last post. I activated them and now I have at least fast short cuts that takes me to a few of the major places.

But my mission is not done yet. I have to find the rebels shield but I am not sure where to look. So to make a break in that part I opted to go down the Crypt in the city. I knew a girl had dissappeared nearby and I had finally got the keys to get down there.

The Crypt is a very atmospheric and eerie place with strange sounds and fogs. It did improve the game a bit. Down here i had to solve several small puzzles in order to continue. I am not really sure why I am there but I plundered every grave I could find with my pickaxe and found valuable items as well as small inscripted stones which I believe will be important later on. 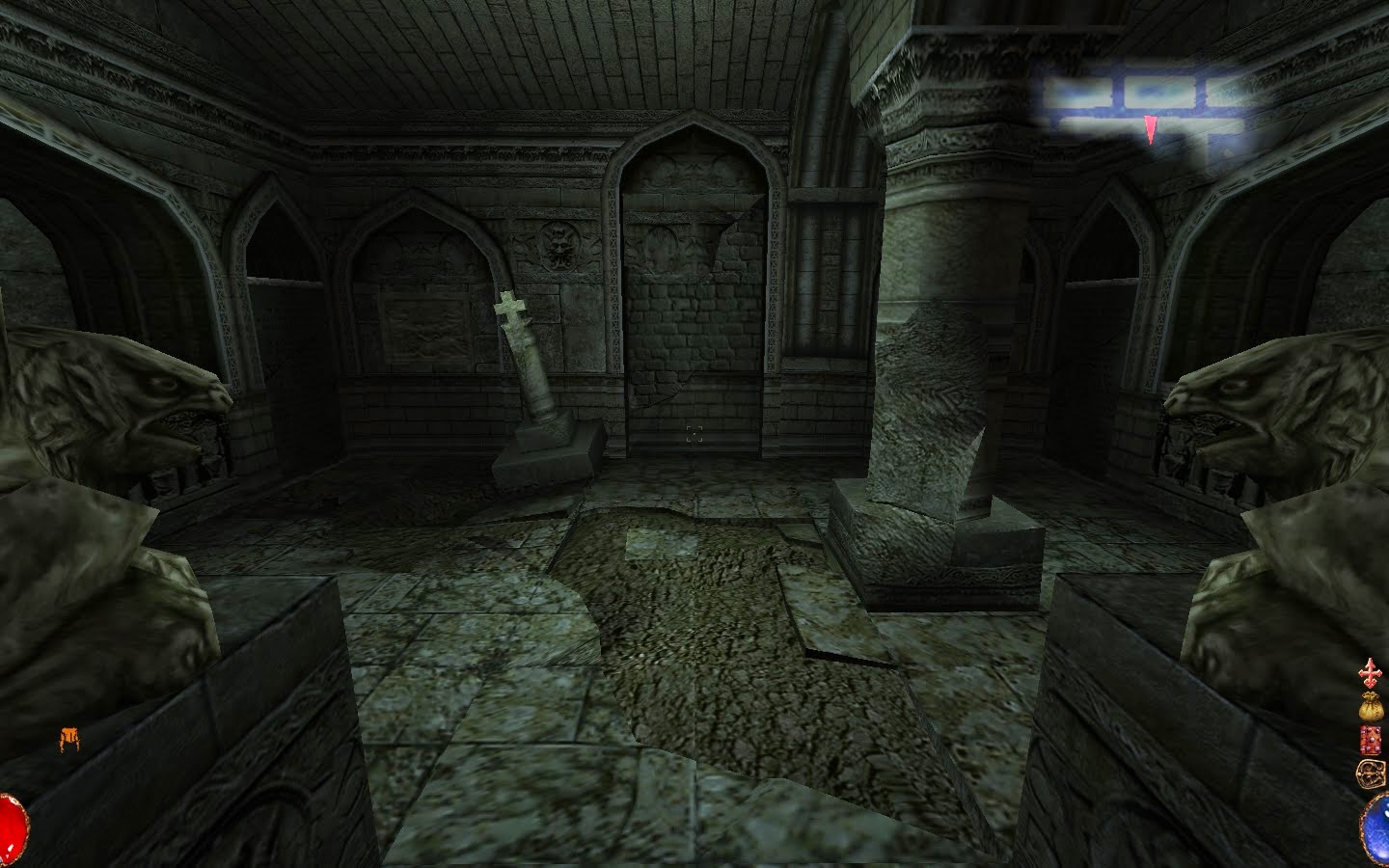 The Crypt spans several levels, each one getting harder and harder to solve. There is a lot of closed portcullis, doors and traps that has to be overcome. This actually turned out to be the hardest part of the game so far puzzlewise. You have to find all levers and preassure plats and activate them in a certain order to be able to proceed. I was close to give up and had to cheat myselves through parts of this complex.

The special stones with inscriptions is the key here. You have to find all six of them and use them to retrieve the Shield in the end. I could also, If I wished plunder the last treasure grave to give me a magical helm but the escape from that part was way to hard for me to overcome. I was chased by Liches and had no way of escaping. The helm didn´t feel really worth it. I quickly returned back to the rebels camp and was able to switch the shield for the last magical artifact I needed. I returned to the temple and equipped both magical artifacts to be able to destroy the meteorite. I was just heading back to the city to communicate my victory when I noticed everything had changed. Enemy snake women had infested the caves. Tough opponents but I was able to kill them. I had just crept out from the caverns into the city and found it full of evil Ylsides (heavily armoured guys with huge swords). They had taken over the town. 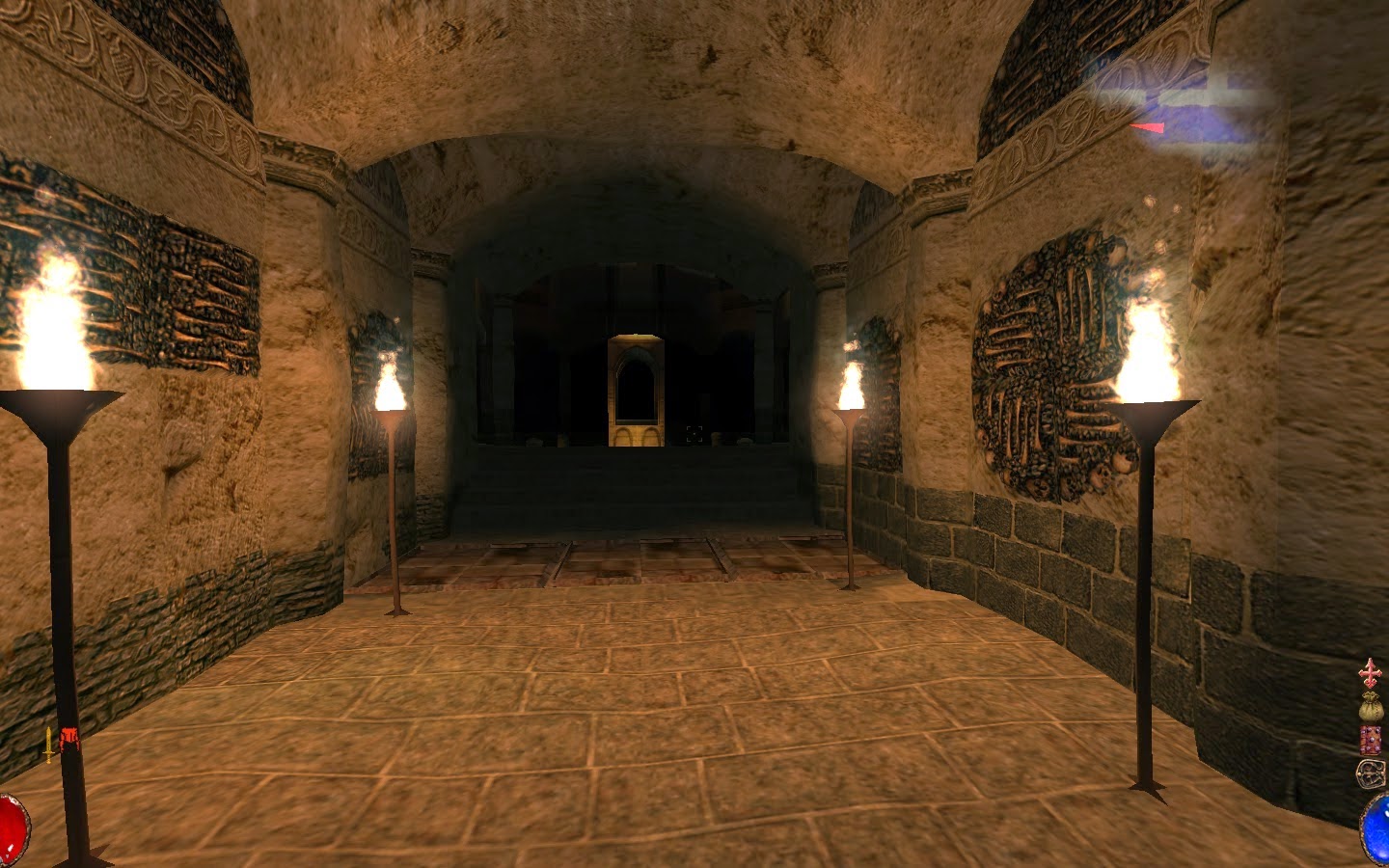 Even though I had saved 3 full levels of attribute and skillpoints and now spent it to maximise my close combat to over 100 and my defense and strength, I had no chance to kill any of them. They are just too powerful for me. After four hits I go down. They are also extremely fast so I cannot use hit-and-run tactics.

I also lack a supply of healing potions at this stage and don´t have much money after all repairs I have made to my equipment. So after 3 tries I just gave up. If it where only one of these I might keep trying but it seems I have to take on one after another. A wounded soldier told me that all of the survivors are being kept in the castle prison.

I googled for this part of the game and it turns up it is a heavily ill-balanced part of the game and mostly so for the warrior type character. The hints are to sneak past or use poison and spells. Neither of which I tried since I haven´t put anything into magic. I give up on this game. I think I am not too far from the end which frustrates me but it isn´t just worth it. I even failed in finding a cheat that would help me. It feels like a waste of time to spend on a game not to finish it but in the end my meagre time could be spent on something more enjoyable.

Coming up is the review of the game.
Upplagd av Saintus kl. 8:20 AM